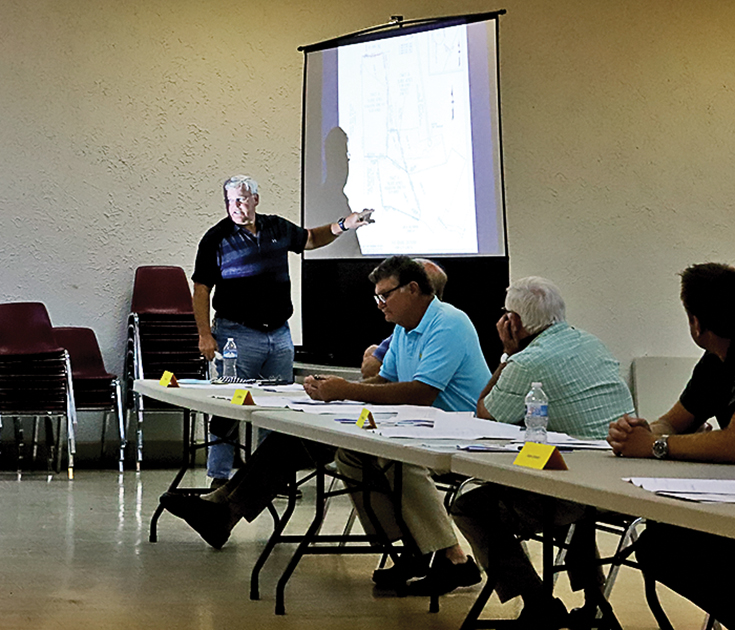 The Harrodsburg Herald/Robert Moore
Shawn Moore, executive director of the Harrodsburg-Mercer County Planning and Zoning Commission, goes over a map of a planned development on Mooreland Avenue.

The Harrodsburg-Mercer County Planning and Zoning Commission held off on making a decision to rezone property on Mooreland Avenue until the developer and the opponents of the proposed developer present more evidence.

Burkhead, who did not attend the hearing, was represented by attorney William L. Patrick of Lawrenceburg. Patrick told the commission it could take over 10 years to fully develop the property. He said Burkhead was looking at dividing the property into 91 lots and building eight units a year.

“You’re looking at a longterm project,” Patrick said. “It won’t go up in a year.”

The attorney said Burkhead had not given any indication on how many duplexes versus single family units were planned.

Patrick said a portion of the parcel is already zoned R2, which would allow duplexes to be built. He said the developer is asking for the rest of the property to be rezoned R2.

The attorney said there are multifamily developments within 750 feet of the proposed site.

“There is a lack of rental housing all through Central Kentucky,” Patrick said. “For that reason, I submit it’s appropriate.”

Commissioner Bobby Upchurch asked about the development’s demand on utilities, such as sewage.

Patrick said it would require the construction of a lift station to handle that many units. Upchurch asked  about other utilities.

“I do not have the information,” Patrick said.

Upchurch said traffic flow is going to be a major concern. He asked if the developers had spoken with the Kentucky Transportation Cabinet. Upchurch said he thought KYTC would want to look at the 152 intersection.

Patrick said Burkhead had met with an official from KYTC who had looked at 152 and US 68 and said they were fine. Upchurch asked if the plans had been shown to KYTC. Tawana Kirsch, who manages a property Burkhead owns in Lawrenceburg, said she believed they had.

“We respectfully ask that you deny the request to rezone,” said Dana Cobb, who presented the zoning commission with a petition signed by people who opposed the project. Cobb said they were all neighbors who lived nearby.

She said the development appeared to contradict the comprehensive plan. Cobb said the transient population might affect the public welfare.

She said she lives in view of a vacant farmhouse which she said attracts trespassers.

“I’m not saying that all renters are going to be trespassers or are going to commit theft,” Cobb said, but she said there is the potential.

Cobb called the proposed development esthetically and visually displeasing and she said she worried about the smell of the proposed lift station. She said she and other residents already experience flooding issues, which she attributed to the nearby developments. She showed the commissioners a copy of a video of her property flooding.

“I feel like it would make our problem even worse,” she said.

She also said 10 years was a long time to listen to the machinery and put up with dust flying and worried about increased traffic.

“We’re showing some periods of decline,” Cobb said, referring to the local population and economy. She said she is concerned about the impact the development could have on the resale of her home.

“Who is going to buy our home?” Cobb asked.

She asked if a traffic analysis had been provided by the developer, which she said was required.

Adam Johnson, who chairs the zoning commission, said that was something that would be done when the development plan was submitted.

“I’m all for moving forward but I’m against these duplexes,” said Kevin Perkins. He said the local roads are already dangerous. He said a firetruck would be unable to drive up the streets with people parked on both sides of the road.

Perkins, a former Harrodsburg City Commissioner, said the city had removed lift statons because of the expense of maintaining them. “We cannot maintain what we have now,” he said.

Jamie Webb Carrier said it is a tightknit neighborhood of mostly older people. “We watch out for each other,” said Carrier. “We’re a very safe neighborhood and we’d like to keep it that way.”

Speaking for the development was Mike Inman, who said the property is owned by Inman Properties LLC. He said they have tried to develop the land several times.

Inman said the neighborhood would look better than other developments because of city laws requiring sidewalks. He said it would be a better usage of the property than apartments. He also complained about neighbors walking on the property without permission, erecting swingsets and digging firepits.

“I cannot think of a better use of this property,” Inman said. He said he has been paying taxes for over a decade with nothing to show for it. “We’re not making money on this property. This is the first offer we’ve had on it in over 10 years.”

Offered a chance for rebuttal, Burkhead’s attorney,  William Patrick, said most of the arguments he’d heard were not relevant. He attributed most of the concerns to “NIMBY”—not in my backyard.

“People are fine with development as long as they don’t have to see it, Patrick said.

“People are afraid of renters, pure and simple,” Patrick said. “They don’t want those people in this neighborhood.”

He said there is no evidence the development would make the area less safe or depreciate anyone’s home.

“Most of what you’ve just heard is not relevant to this application,” Patrick said. “The only thing before this commission tonight is whether the zoning should be modified.”Tawana Kirsch, the property manager, said prospective tenants go through strict background checks. “We don’t just take anybody,” she said. She was asked about the average rent. Kirsch said rent started at $900 a month. She said there would be assigned parking.

“You might call them renters, but they are family people,” said Kirsch, noting many people downsize to smaller homes as they get older because it’s less responsibility.

She said they receive many applications for people trying to get out of Harrodsburg, even from people who work in Harrodsburg.

“People who live behind it can always build a fence if it bothers them,” Kirsch said.

However, that wasn’t enough for Commissoner Upchurch, who asked if the information from the KYTC could be submitted before the commission voted.

“We haven’t been presented with enough evidence,” he said, and asked about continuing the hearing.

The commission voted five to two to not continue the public hearing. Patrick was asked to submit information on traffic and city services. Commissioner Jonathan Elliott called the plan that had been presented vague.

“What they’re showing you is what they intend to do if the rezoning is successful,” said Shawn Moore, the executive director of planning and zoning. Moore said the final plan would have to include 50-foot right-of-ways while the current plan shows only 32-foot right-of-ways.

Moore said the traffic and stormwater analysis is required during the application for the construction permit.

“Why would you spend money on a traffic study if you don’t know it’s going to get approved?” he asked. “The question at hand is it appropriate for that area?” Moore said the development is surrounded by other developments and said the property was annexed in 1991 with the intention of residential development.

One resident had asked if the property could be rezoned agricultural, but Moore said there are no ag zones within Harrodsburg city limits. He said R1 is the most restrictive classification.

He also told the commissioners that if the zone change was denied, Burkhead could still build multifamily units in the areas zoned R2 and the neighbors would have no say.

The decision to continue the hearing did not please some of the opponents.

“He didn’t present all the evidence,” said Kevin Perksin. “So why continue this? Everybody knew this was the deadline. Why are you giving him more time to get it?”

He was told that the opponents would also be able to present more evidence. The hearing was continued until Wednesday, Sept. 30, at 5:35 p.m. At Lions Park Community Center (440 East Factory Street).

In other business, the Harrodsburg-Mercer County Planning and Zoning Commission approved a site plan submitted by LW Wilson & Sons LLC to construct five industrial buildings totaling 84,200 square feet on Industry Road. The property is zoned I-1 (light industrial). The approval is contingent on the owners getting the utility signatures.