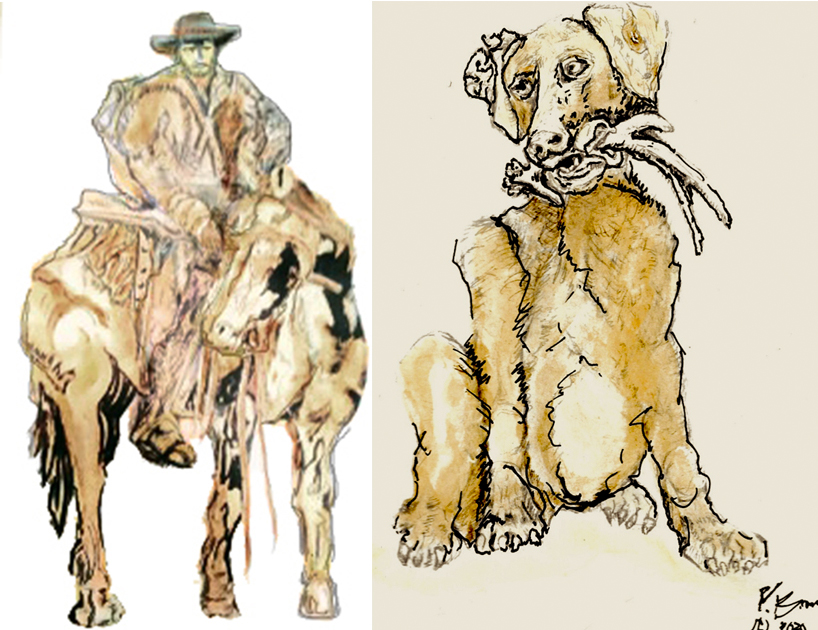 Forest Boone, a direct descendent of Daniel Boone, will be the artist behind the new bronze sculpture of James Harrod destined to be placed at Old Fort Harrod.

A Louisville native, Boone said he has a serendipitous connection to Harrodsburg.

“I always had a strong draw toward Harrodsburg. My family has been driving through the town for 45 years,” said Boone. “Sometimes we stopped at the Fort on our way to the Cumberland Gap.”

Boone grew up with a heavy background in naturalism anchoring him to his ancestor Daniel Boone.

He takes his research into the subject of his sculptures very seriously.

“I will need to fully understand what the man was like: what he ate, what he did with his hands, how he lived outdoors while traveling on horseback, what he hunted, how he transported the first live bee hive to Kentucky and so much more,” said Boone. “I will first need to authentically make the items Harrod has on his horse and on his him if I am going to make molds of them to cast them in bronze.  Getting all the little details right is very important when creating historical monuments because they will be around for hundreds of years.” 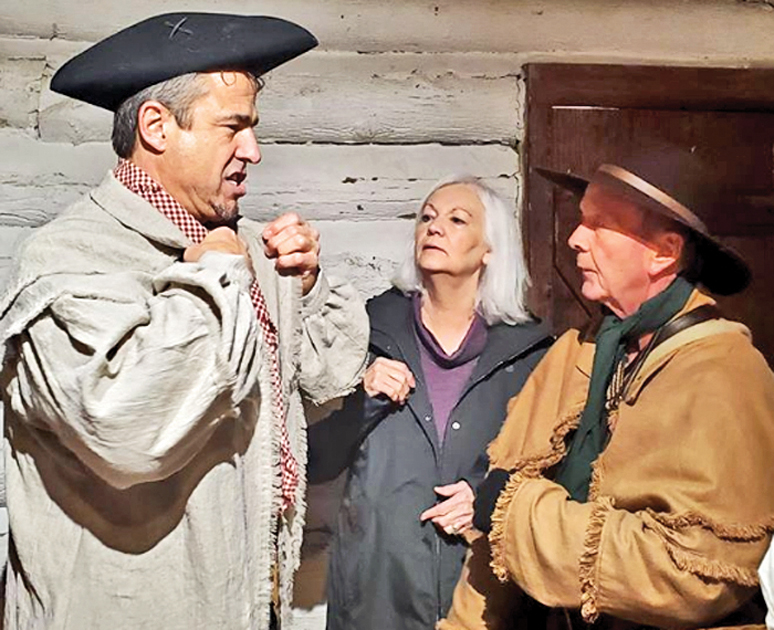 Artist Forest Boone gets tips on looking authentic from Larry Catlett of the Friends of Fort Harrod during the Gunpowder Run, which commemorates George Rogers Clark’s trip in January 1777 to deliver 500 pounds of black powder to Fort Harrod.

Boone said his background in living unassisted in nature will help him understand Harrod.

“I got my start in art 29 years ago making primitive art-often using animal parts or making his own paints from earthen materials. That experience, coupled with his time living in the woods-fly fishing and running a trout line daily and brain tanning hides will surely come into play,” said Boone. “On a practical level when I create the accessories for the James Harrod monument and conceptually, as I first sculpt a small scale clay model for approval, prior to starting the life size version.”

Along with his lifetime of naturalism Boone said he feels destined to be apart of the project because of his connection to Harrodsburg.

“The thing we artists call a sense of place, I have for the town of Harrodsburg, not just traveling through the town for decades but it’s in my bloodline with Daniel Boone being a friend of Harrods. My being honored with the creation of this monument was destined to be,” said Boone. “I envision it being on a 26,000 pound sculpture of a sedimentary monolith that I create, which ties directly into the limestone quarry there.”

Boone has a vision for the statue.

” Congruent with the limestone quarry in Harrodsburg, I envision the monument being installed with a small, naturallimestone outcropping, juxtaposed to the statues. I also see two meandering trails, or paths, of different elevations that taper off into the distance, for forced perspective,” said Boone. “The implication here is that Harrod, the explorer, blazed the untamed trail and he took the high road. I have his horse not walking but stopped. After all, the town of Harrodsburg was founded because Harrod not only blazed a new trail, but because he stopped here, which is why my sketch shows both his horse and his dog, not moving, but stopped.”

Boone is working closely with Joseph’s Dream for planning and funding, and Friends of the Fort association for feedback, to ensure that the final statue accurately represents that period in history.

“Ken Prevett walked into my studio in Louisville and the rest is soon to be history,” said Boone. “Everything feels right, and it seems like the right time for Harrodsburg with the 250th celebration in the works.”

Prevett is the chairman of the statue committee for the Friends of the Fort organization.  Prevett and his nonprofit organization, Joseph’s Dream, was instrumental in the revitalization of the Big Spring Park.

“This sculpture is hopefully just stage one of the project,” said Prevett. “We hope to have three more stages that include a Daniel Boone sculpture and interactive history display, the two pastors at the big spring that held the first rival memorialized as a sculpture and a bicycle path connecting all sites together across Harrodsburg.”

Prevett said the other three stages are just dreams at the moment because all efforts are focused on the initial statue.

“The cost largely depends upon the cost of the site procurement and statue platform construction,” said Prevett.  “The Friends of Fort Harrod are currently working out these details. Designs are currently being discussed and the final approval is expected by the Friends of the Fort Board.”

Although the total amount of the statue has not been raised the first wave of costs is the design and scale model fees of around $10,000. Friends of the Fort and Joseph’s Dream have agreed to the costs and are moving forward with faith the rest of the funds will be raised in time.

“Michael and Carol Conover have agreed to donate the initial $10,000 to Joseph’s Dream to pay for the initial costs of phase one which consists of  the design, development and manufacturing of a life-sized statue suitable for sending off to the foundry in Boston to be “Bronzed”. That’s where the big expense happens” said Prevett. “We appreciate Mike and Carol as champions of the cause. Their support of Harrodsburg and specifically this project makes us extremely grateful.”

To donate, mail checks payable to Joseph’s Dream with Statue in the memo line to P.O. Box 22, Harrodsburg, KY 40330.

“We will have a separate local bank account opened shortly to allow folks to walk in and donate as well,” said Prevett. “We are hoping to complete stage one before the 250th celebration.”

Joseph’s Dream, Inc, a public charity, is the sole funding entity for the statue. The agreement found in last months minutes of Friends of Fort Harrod, stipulates 100 percent of the funds raised by Joseph’s Dream must  go to pay for the statue first.

For more information on Forest Boone, visit his website at www.forestboonestudio.com.