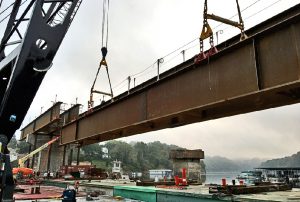 A Walsh Construction crane moves a girder into place. The girder will serve as part of the new Kennedy Mill Bridge, which connects Mercer and Garrard Counties.

There’s good news for local commuters who have been forced to take the long way around after the closing of the Kennedy Mill Bridge. The state has agreed to provide an incentive to the contractor to speed up construction of the replacement bridge, and they hope to have the new span in place this spring, said Kevin J. Buch, P.E., the project manager with Walsh Construction Company.

That will be good news to local marinas, who were facing another season without the bridge, which was closed for good in April. The original contracted completion date was November 2019.

“We are working to accelerate,” Buch said.

For the last several weeks, Walsh has been moving in mammoth girders, the biggest measuring 136-feet long and weighing 179,000 pounds each. Employees are assembling the girders into quads that weigh about 380,000 pounds total and require about 2,400 bolts to install before releasing from the crane.

Putting all that heavy metal together can be demanding. Last Wednesday, crews didn’t finish work until 11 p.m. at night. 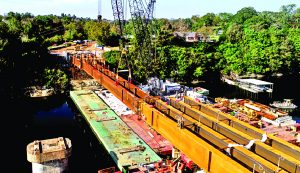 It takes approximately 2,400 bolts to assemble the girders for the new Kennedy Mill Bridge.

“You can’t just go home,” Buch said. “Once you lift from the barge, you’ve got to finish the job.”

Once the girders are in place, Walsh will begin paving the approach to the bridge on the Mercer County side.

Buch said they will work through the winter pouring concrete. They are hoping for a mild winter, but the weather has not been cooperative so far.

In June, torrential downpours forced Walsh to stop work on pier one, which sits on the Mercer County side.

If the new span is open for traffic by Memorial Day, that will be the first good news related to the bridge locals will have received in a long time. The former bridge, which was nearly a century old, was closed at least seven times since it was built and four times since 2003. In 2015, the bridge was shut down a week before Labor Day.

Marinas have also had to deal with construction headaches. Right before Memorial day, many Mercer County boat ramps were closed because the lake’s water level was lowered for construction work.

Despite all of that, this season was good one, said Tona Tudor, who owns Sunset Marina with her husband, John.

“As long as the sun was shining, the boats were running,” Tudor said. “We had a fantastic summer.”

That said, she really hopes the new bridge is open before the start of boating season.

Tudor praised the contractors for their efforts.