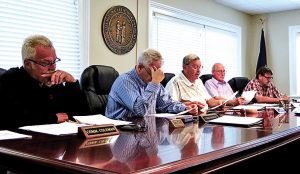 The Harrodsburg City Commission has passed a $14.8 million budget.

The city commissioners gave the first reading to the budget at their May 29 meeting. Due to concerns the budget may not have been passed on time, they held a special meeting on June 1 to give the budget a second reading.

The commissioners designated $503,000 for paving city streets, a significant increase over last year, when the city set aside $200,000 for paving.

Over half of that amount comes from left over funding from the sewer and water improvement projects and, by law, has to be spent on streets damaged during the recent water and sewer improvements. The commissioners also agreed to advertise for bids for street paving.

One way the city has looked at stretching funding is by leasing municipal vehicles instead of purchasing them outright. City officials will meet with representatives from Enterprise on Thursday, June 7.