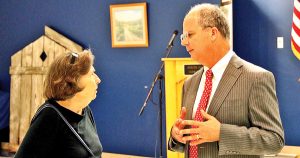 Guthrie is touring the 21 counties in the Second Congressional District, which including Mercer County.

Last week, he met with his constituents here in Mercer, and the first thing the congressman was asked about was the farm bill. The bill failed last month largely because of a proposed reform to the federal food stamp program, SNAP which would add a work requirement for recipients between the age of 18–55 without dependent children over the age of six. Up to two million recipients could lose their benefits or have them reduced under the proposal.

“I thought it was pretty fair,” Guthrie said. He said there are “employers waiting with open arms” for SNAP recipients who may be currently unemployed.

Even though Republicans currently control both houses of Congress as well as the presidency, Guthrie blamed the Democrats for the farm bill’s failure.

“We got zero support from the other side of the aisle,” he said. “No Democrat voted for it.”

Guthrie also blamed competing sects within the G.O.P. One group, which wants immigration reforms, is holding the bill hostage, he said. Guthrie said he believes the bill will be passed later this month and sent to the Senate.

“I think it’s going to pass by the end of June,” he said.

Traditionally, the farm bill has passed with broad bipartisan support. Its defeat this year is widely seen as the failure of Speaker Paul Ryan to control the competing sects within his party. The internecine battles within the G.O.P. is what led Ryan’s predecessor, John Boehner, to resign in 2015. Ryan has announced his retirement at the end of his current term. Guthrie said he supported Rep. Kevin McCarthy of California as Ryan’s replacement.

“It doesn’t seem your party has the ability to get the ball and march it down the field and score,” Dunne said, pointing to stated Republican objectives such as immigration reform.

Guthrie pointed to repeal of the 2010 Dodd-Frank law and the National Defense Authorization as a victory. He said the problem wasn’t with House leadership, it was with the Senate. He noted that Arizona Sen. John McCain had voted against an Obamacare repeal attempt.

Guthrie said entitlement reform is necessary to reduce the federal deficit. “That’s why we’re trying to force the food stamp reform through the farm bill,” he said.

He noted the President has said he will refuse to sign into law any changes to Social Security and Medicare. As a result, deficit hawks in the House have taken aim at Medicaid. But Guthrie said he doubted there would be any significant reform of Medicaid by the end of the summer.

The congressman was also asked about opioids, specifically, expanding the number of addicts who could be treated. Medicaid restricts treatment facilities from having more than 16 beds.

“We’re trying not to expand programs until we find alternative ways to pay for them,” Guthrie said.

He said the Republicans are making progress in advancing their agenda.

“I think we’ve moved the ball down the field,” Guthrie said. “We’ve got to get it across the finish line.”