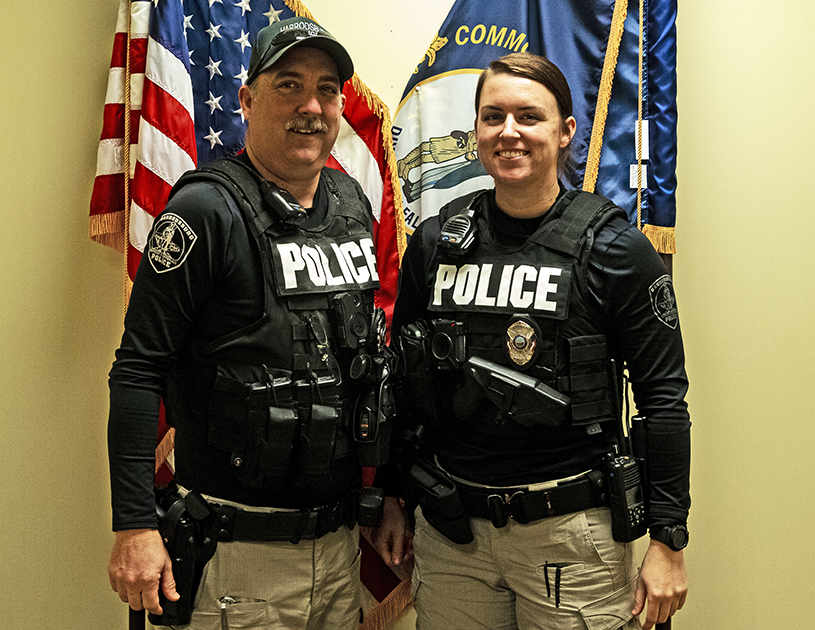 The Harrodsburg Herald/Robert Moore
It’s believed that Michael and Tabitha Shewmaker became one of only a few—if not the only—father and daughter serving with the same police department in Kentucky when she joined the Harrodsburg Police Department in January 2022. Michael Shewmaker has joined the Mercer County school district as its first law enforcement officer. (File image).

The Mercer County Board of Education has hired their first law enforcement officer, and he’s going to be a familiar one to many. At their meeting on Tuesday, Jan. 17, the school district announced they had hired Michael Shewmaker, a patrolman formerly with the Harrodsburg Police Department who served as school resource officer with Mercer schools from 2014 until 2020. Shewmaker started working in law enforcement in 1990 as a dispatcher before becoming a patrol officer in 1991. He retired from the Versailles police department in 2011 but rejoined the HPD in 2013.

The school district has had an agreement with the City of Harrodsburg to secure three school resource officers since 2018. In 2019, the Kentucky General Assembly passed the School Safety and Resiliency Act, which mandated each school campus should have a school resource officer. Currently, neither the HPD nor the Mercer County Sheriff’s Officer have enough personnel to provide the required officers. The school district is looking create their own law enforcement agency. At last week’s meeting, Esther Hayslett, the director of pupil personnel and safe schools coordinator, announced Shewmaker’s hire.

The board also gave second reading to the student resource officer policy. Hayslett said the next step is submitting a list of items necessary to establish a law enforcement agency. She said the district is making arrangements so Shewmaker can perform background checks. They are looking at hiring a second officer.

The board also received a project update on the King Middle School rest room renovation from Suzanne Irwin, a project architect with RossTarrant Architects. Explained the scope of the project. In December 2022, the board gave preliminary approval to a project to renovate the bathrooms at a projected total cost of more than $1.1 million and include new plumbing fixtures and finishes—sinks, toilets and urinals—in student rest rooms throughout the school and also a new sanitary line for the dishwasher in the kitchen.

On Tuesday night, the board approved a plan that will be less than the original proposal because the sanitary sewer work turned out not to be necessary. That reduced the total projected cost to $862,120, according to documents made available by the district.

Pending approval from the Kentucky Department of Education, Irwin said they could have the project out to bid by Thursday, Feb. 9, with construction set to start by summer 2023. Superintendent Jason Booher said time is of the essence and the work needs to be completed by the first week of school. The board approved the drawing and specifications and voted to seek approval to advertise bids.

“I know it will be much appreciated,” said Luke Whitenack, the student representative on the school board. Whitenack said softball and baseball teams are also excited about the new fields.

The board also approved change orders for the athletic complex. The approved paying $15,088.40 for graphics at the baseball and new Softball windscreens plus three additional days for unanticipated delays due to the weather. They also approved a requested change order to the softball fence topper resulting in a credit of $800.

Finally, the board approved reconvening the local planning commission for the new elementary school. The tentative first date was Monday, Jan. 23.

The next meeting of the Mercer County Board of Education will be Tuesday, Feb. 21, at 5:30 p.m.