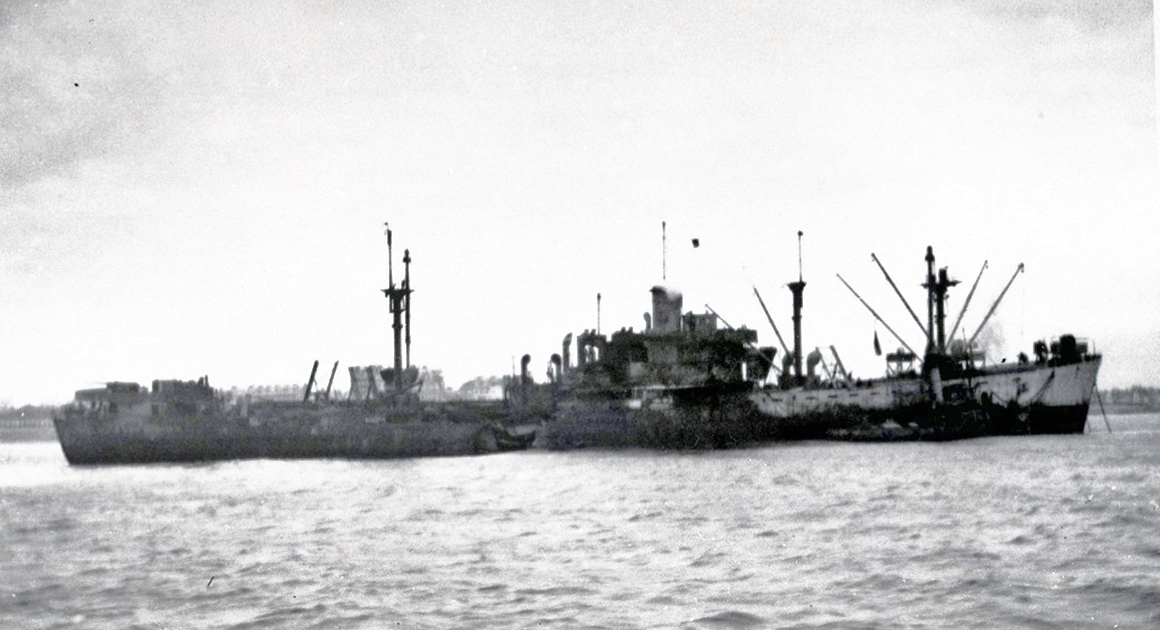 Photo Submitted
The SS James Harrod was a Liberty cargo ship named for the founder of Harrodsburg and was built in 1943.

The SS James Harrod was a Liberty cargo ship named for the founder of Harrodsburg and built in 1943. This war craft was constructed of steel and was a steam-powered vessel. The Harrod was operated by Sudden and Christenson, Inc., a West Coast shipping firm. Its call sign was KKRQ.

Liberty ships carried a crew of about 44 and 12 to 25 naval armed guards. The Harrod was 441 feet long and 56 feet wide. She had a three-cylinder, reciprocating steam engine, fed by two oil-burning boilers that produced 2,500 hp and a speed of 11 knots. She had five holds and could carry over 9,000 tons of cargo, plus airplanes, tanks, and locomotives lashed to its deck. A Liberty ship could carry 2,840 jeeps, 440 tanks, or 230 million rounds of rifle ammunition. A Liberty ship cost just under $2 million and was built in four and a half days using parts prefabricated throughout the country in 250-ton sections.

The Harrod was launched March 2, 1943, at Portland, Oregon, by the Oregon Shipbuilding Company, the company’s 144th Liberty Ship completed during World War II. At the launching program, a telegram was read from Mayor pro-tem Tom Squifflet, acting while Mayor Maurice Watts was serving in the Navy. The telegram carried the appreciation of the citizens of Harrodsburg for the ship’s name and expressed good wishes for the crew and the hope of a useful future for the gallant ship.

The commander of the ship wrote that on returning from its maiden voyage, the Harrod had made a splendid record, and the entire crew was proud of the ship’s action. No further news of the ship was received until Harrodsburg Herald Editor D. M. Hutton received a business letter from Adolph A. Hoehling, head of an aviation news service in Washington, D.C., and author of The Fighting Liberty Ships:

“Incidentally, you may be interested in the fate of the SS James Harrod, named after the founder of Harrodsburg. I was in command of the gun crew on the ships last voyage. We collided and burned in the North Sea, January 16, 1945. We lost four men.”

The Harrod had collided with the SS Raymond B. Stevens on Jan. 16, 1945, and burned in the North Sea. The Harrod exploded, burnted and grounded near Deal Castle. Upon collision, the Harrod was beached off Kingsdown by tugs. After the crew were removed, she blew off northward until she stranded on Malm Rocks and broke in two.

The Harrod was carrying a cargo of 80-octane gasoline in GI tins—five gallons each—for a total of 9,200 tons. Much of her cargo was salvaged despite the fire. Some of the damaged ship can still be found on site. Her stern lies at 51 12.59N, 01 24.38E. Her fore section was abandoned on Blythe Sands and was later refloated and laid up in the River Blackwater. In 1946 the bow was removed and scuttled with German gas weapons on board.

Hoehling’s account of his adventures in his book, The Fighting Liberty Ships, include the relationships between gun crews and merchant crews and between himself as officer and the typical cross-section of American soldier under his command. The chapters dealing with the destruction of the Harrod are moving and at times disquieting. The personal narrative is well-framed by frequent brief segments summarizing events in the land and sea conflicts and supported by an impressive bibliography.

“About 0100 on 16 January the vessel passed Dover and proceeded into the Downs toward Southern Anchorage, Ransgate. Weather had cleared then and visibility was 3 miles or better. Wind was negligible. A strong current of about 4 knots, was setting from the Southwest.”

Suddenly at 0125 the Harrod collided with an anchored vessel. The bow of the Stevens scraped half the length of the Harrod’s starboard, shearing off all life rafts and boats, finally crunching into an after-cargo hold. Why the current had not pushed Harrod away from the other ship remains a mystery—yet one more mystery surrounding the legend of James Harrod. 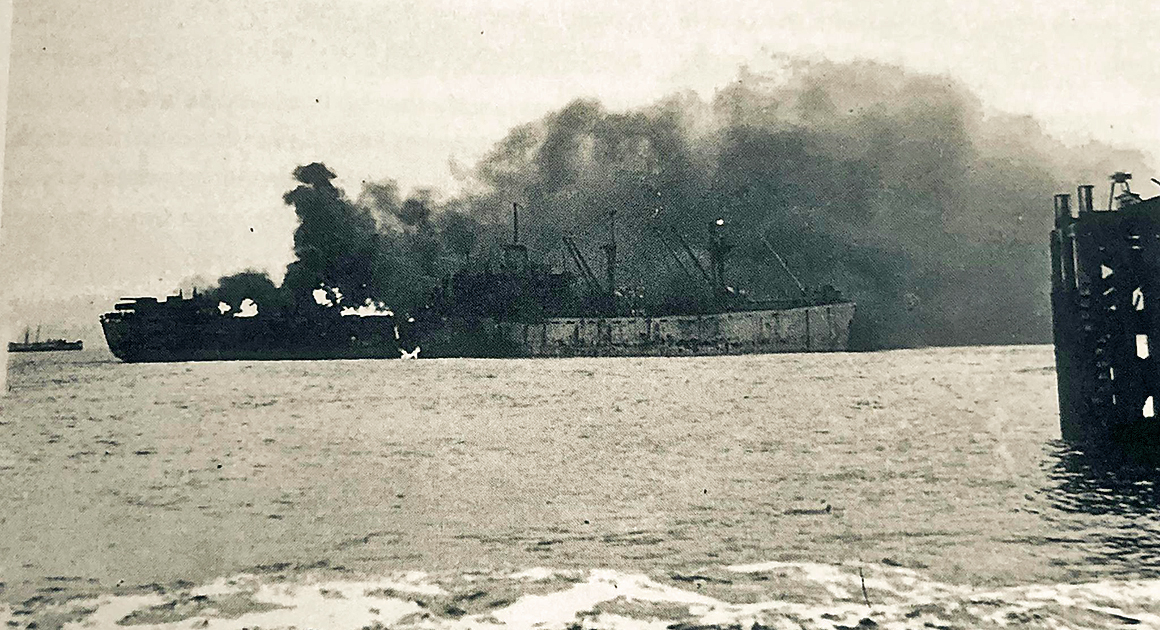 Photo Submitted
The Harrod collided with the SS Raymond B. Stevens on Jan. 16, 1945 and burned in the North Sea. Upon collision, the Harrod was beached off Kingsdown by tugs. After the crew were removed, she blew off northward until she stranded and broke in two.

Some of the shattered cargo from the Harrod’s forward holds would be salvaged for service in the war’s final days. In fact, at the writing of this article last year, there is a sterling silver box from the wreckage for sale on eBay. It is engraved with the words, “Mrs. Erven F. Murphy, Sponsor of SS James Harrod, on March 3, 1943, built by Oregon Shipbuilding Corporation for the United States Maritime Commission.” This appears to have been a gift to Murphy for being a sponsor during the building of the ship. Asking price, $895.

I am lucky enough to have a Facebook friend, Carly Morris, who lives near Deal Kent in the United Kingdom. She contacted me on Jan. 16, 2020, on the 75th anniversary. She also sent along some photographs. The information at the memorial states:

“It was in the early hours of the 16th of January 1935, that the SS James Harrod anchored up for an overnight stop in the waters of the English Channel. There was a very strong tide, and the anchor could not hold the bottom, setting it on a collision course with the Liberty ship SS Raymond B. Stevens. Both were carrying dangerous cargo for the war effort. The Harrod was carrying thousands of containers of fuel which ignited on impact killing four navy armed guards. The ship burned for a few days before it ran aground off Deal in Kent.”

The deaths are recorded at Cambridge American cemetery in the UK are as follows:

• Walter T. Porter, from South Natick, Massachusetts. He is buried in the Americans Cemetery, Cambridge, UK.

• James F. Ricketts, First class from Homer, Louisiana, son of Mary Lou. James was the third son of Mary’s lost to war. James is recorded as Missing in Action.

Local historian Bobbi Dawn Rightmyer has written articles for the Harrodsburg Herald, the Danville Advocate-Messenger, Kentucky Monthly and Kentucky Humanities. Her latest book, “A History Of Harrodsburg: Saratoga Of The South” can be purchased at the Harrodsburg Herald (101 East Broadway) as well as Jerry Sampson Antiques, Old Fort Harrod Gift Shop and the Beaumont Inn. It can also be purchased online at arcadiapublishing.com.