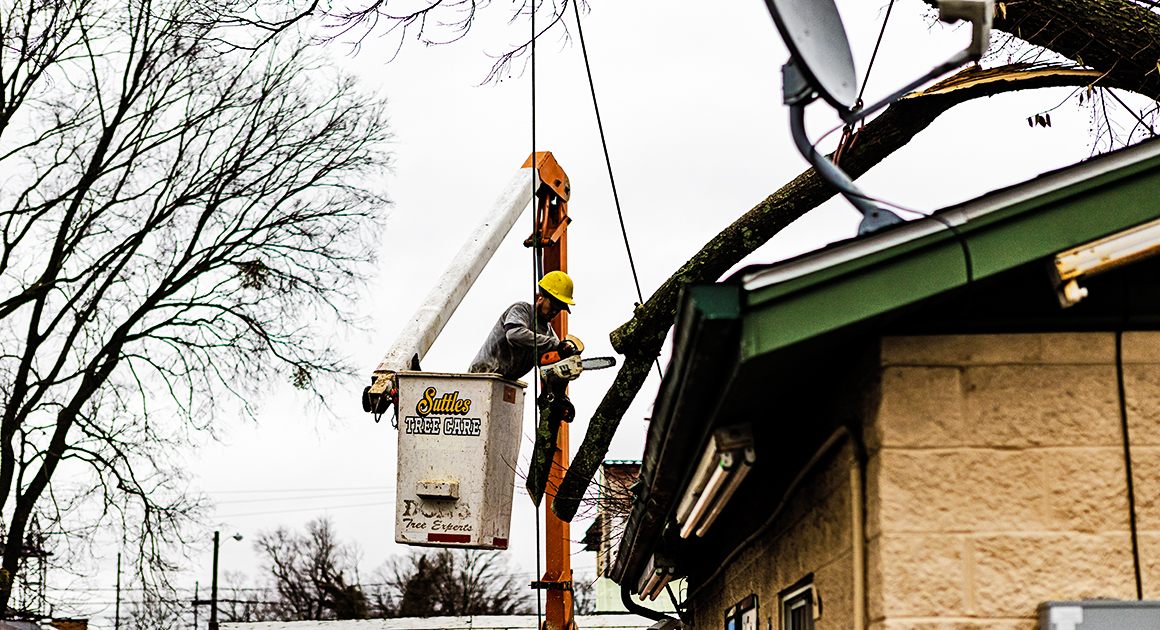 The Harrodsburg Herald/Robert Moore
A worker removes a fallen tree from the roof of the Tobacco Barn on College Street. The National Weather Service has confirmed that a tornado touched down in Mercer County earlier today, doing extensive damage to structures across the county and knocking out the power for at least 5,000 people, according to media reports.

Crews are still working to repair the damage left from a severe strom that roared through Mercer County this morning.

According to the National Weather Service, an EF-1 tornado with 100 mph winds touched down in the western Harrodsburg, knocking down trees and power lines. Officials say there were no reported injuries during the storm.

WKYT reported more than 5,000 customers were without power at one point. Cornishville Road appeared to suffer the worst, but locations in town were also hit hard.

Part of the outer roof of the Mercer Area Family and Wellness building—formerly the YMCA–was peeled back. Children were bused to Mercer County Senior High School to be picked up by their parents. 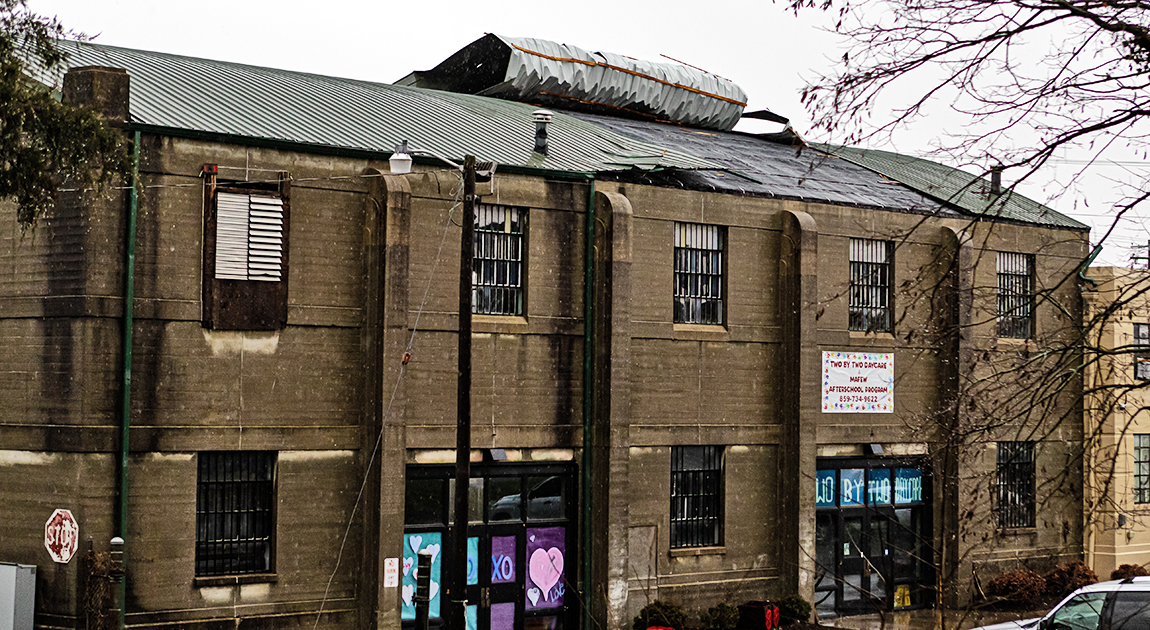 The Harrodsburg Herald/Robert Moore
A storm peeled back part of the outer roof of MAFEW this morning. Children were transported to the high school to be picked up by their parents. Despite the damage, MAFEW hopes to be open tomorrow and officials say the building has been cleared by the fire marshal.

Debrah Pierce, the CEO and office manager at MAFEW, praised her staff.

“Our staff did an excellent job,” Pierce said. Forntunately, the staff had held a meeting on Monday, where, among other topics, they’d gone over emergency preparedness. The staff, joined by city workers and first responders, helped transport children to the high school. Some even played games with the children—some of whom were as young as one years ole—to keep them calm.

“I think there was a lot of stress for everybody,” Pierce said.

Pierce said the City of Harrodsburg was handling any issues with insurance at the historic building, which was once a National Guard Armory before serving as the home of the YMCA. Pierce praised city officials for their fast response, saying Mayor Billy Whitenack and County Judge-Executive Sarah Steele had helped with the evacuation.

“We’ve had a lot of help from city officials,” Pierce said.

She said she had spoken with the fire marshal, who had cleared the building. Even though they have buckets out for leaks, Pierce said they hope to be open tomorrow.

Chad Meece said he hopes the Tobacco Barn will also be open tomorrow. The store, which is located across College Street from MAFEW, had a tree fall on the roof during the storm. Fortunately no one was inside it hit. At around 3 p.m., a contractor was removing the tree while Meece, Building Inspector Kenny Milburn and Harrodsburg Fire Chief Logan Steele watched. Meece said the tree had knocked out part of the ceiling in the back, but said the damage was “nothing major.” 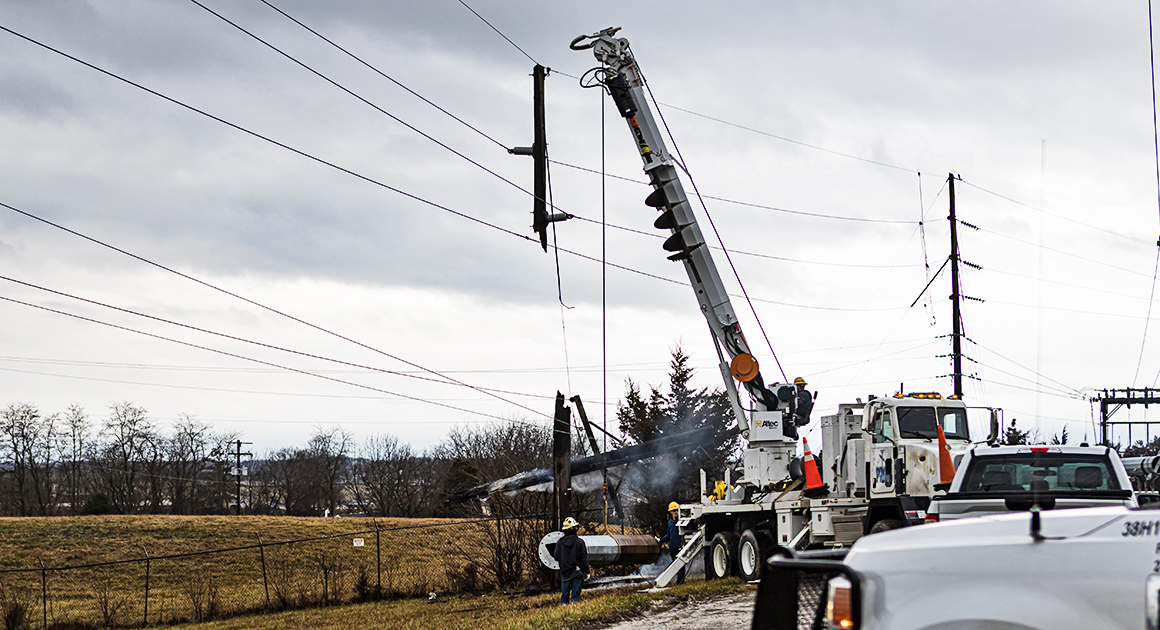 The Harrodsburg Herald/Robert Moore
Utility crews work to repair and replace equipment damaged when a severe storm tore through Mercer County earlier this morning. Police had to direct traffic when the stop lights between Lexington Street and the U.S. 127 Bypass became inoperative, but the lights were restored by the afternoon.

Contractors and crews from Kentucky Utilities were still working on damage to electrical equipment behind the Pioneer Center mall. Power had been knocked out earlier that day, including all of the traffic lights from the U.S. 127 bypass to Lexington Street, but power had been restored by the afternoon.