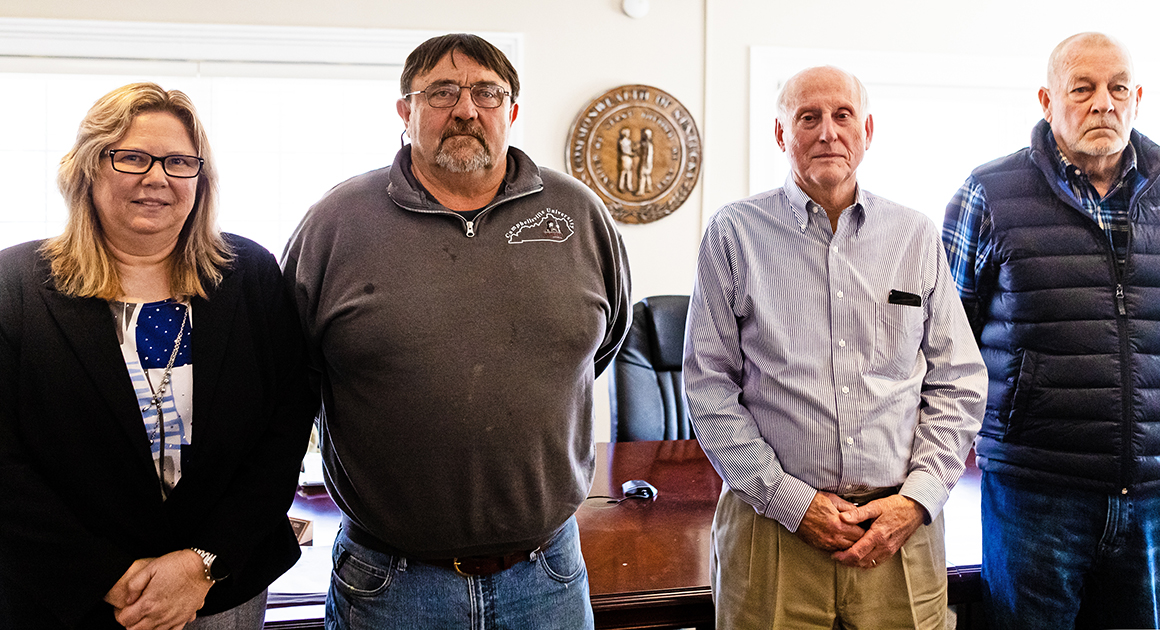 The Harrodsburg City Commission began setting their house in order for the new year, including trying to clean up a mess from years past.

At their regular meeting on Monday, Jan, 9, the commissioners discussed adopting Cresthill Drive Shawn Moore, executive director of planning and zoning, told the commission that Cresthill Drive had never received the final layer of asphalt. Moore said the street was part of a subdivision, Scenic Hills phase II, which went bankrupt during the subprime mortgage crisis that began in 2007.

“It was basically built up to final coat,” Moore said. “It was not monitored as closely as we monitor it now.”

While the builder, Claunch Construction, posted bonds for the road, the bonds were allowed to expire without the road being finished. Moore said the city manager was holding the bonds at that time. Moore said Cresthill Drive’s base coat is good, but the longer it takes to finish the street, the more expensive it’s going to be.

“It will eventually have to be repaired,” Moore said.

Commissioner Charlie Mattingly wants the street to be adopted into the city so if funding becomes available, the city can pave the street. Other streets in the subdivision will also have to be adopted.
The city plows Cresthill and has already installed street lights, even though Cresthill is not legally in the city. This drew criticism from Mayor Billy Whitenack, who in the past has criticized the city’s inconsistent handling of code enforcement

“There is a right way to do things,” Whitenack said. “We shouldn’t have put up street lights on a street the city doesn’t own.”

“We all thought that it had been done,” said Commissioner Marvin “Bubby” Isham. It was said that Cresthill had slipped through the cracks.

“Them cracks ought to be full by now,” Whitenack said.

While the mayor criticized the city’s handling of the matter, he agreed Cresthill needed to be adopted. But he said it looked like they were doing favors.

“It sounds like the city dropped the ball on it,” Whitenack said.

“You can’t have a street sitting there with no lights on it,” Commissioner Mattingly said. “I honestly thought it was adopted in when Grace Court was adopted in.”

There are other streets in the subdivision that will need to be adopted as well, but the city does not have a list of the orphaned streets.

Isham asked City Attorney Norrie Currens to draft an ordinance so the city could adopt Cresthill. Currens said she would have the draft written up by the next meeting. However, even after the city adopts the street, it may not be completed any time soon.

“I’m not promising it’s going to get paved this year,” said Mattingly, who said the city’s budget for street repairs—which does not include Cresthill—has already been set for the year.

The commissioners also discussed changes in the city’s policy regarding employees clocking in and out. Currens said the changes were made because they were getting times late and the city is legally required to keep accurate records. While police and fire are exempt, Commissioner Isham noted water and sewer maintenance personnel are all over the city and may not be able to come back to clock in and out.

“Workers can text city hall and keep records of their hours,” Currens said. “As long as there’s an explanation for it.”

Currens said if a city worker was in an accident while on lunch and still on the clock, it could be argued the city is responsible according to worker’s comp.

“This was included in the policy revision,” said Currens, referring to an overhaul of the city’s policy and procedures completed by the former city commission a the end of last year. “It it wasn’t a problem, we wouldn’t be having a discussion about it.”

She said supervisors can approve hours for emergency repairs.

While some of the commissioner and department supervisors ran through some possible scenarios, Currens said she wasn’t a representative for worker’s compensation.

“I can’t dictate what workman’s comp is or isn’t going to do,” she said.

“I think we ought to trust the employees enough to give them a 30 minute lunch,” said Mayor Whitenack, who was formerly the chief of the Harrodsburg Police Department. Whitenack said supervisors should be responsible for disciplinary action if an employee abuses the policy.

“If we don’t trust them, we should get different employees,” Whitenack said. He said the city was micro-managing employees.

“You trust them until you can’t,” Whitenack said. “It’s up to the supervisors to weed them out.”

City Clerk Shavonna Huffman suggested getting clarification from the Kentucky League of Cities during training session on Thursday and then discuss possible changes to policies and procedures.
In related business, the commission voted to authorize Mayor Whitenack to sign a contract with Kentucky League City for Personnel Policy Training. No further action was taken.