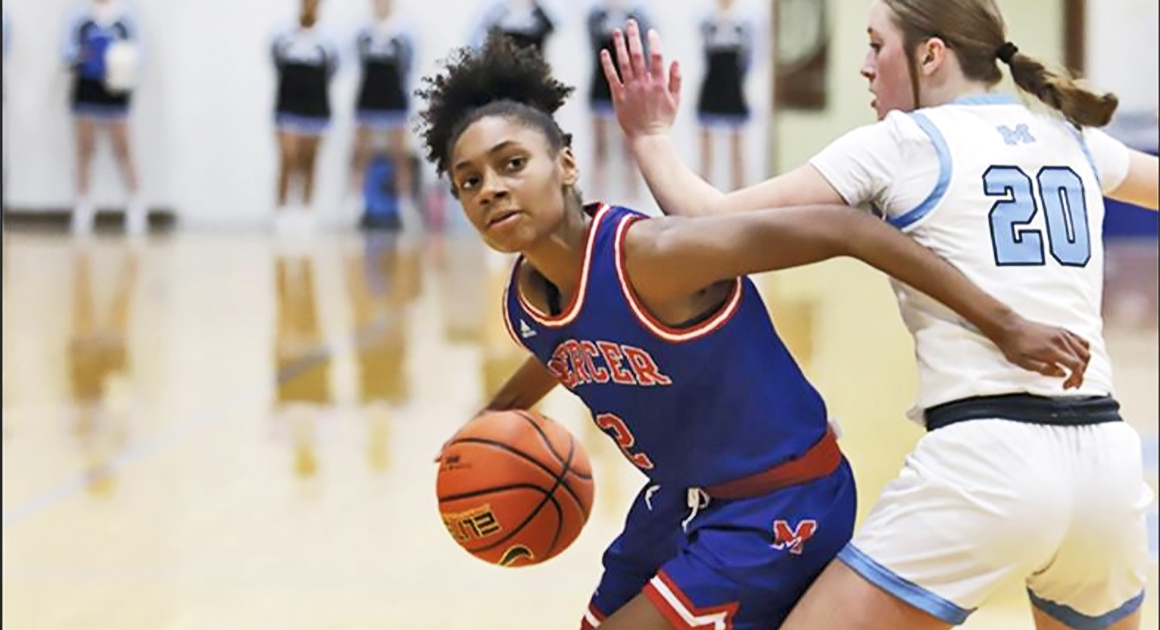 The Harrodsburg Herald/April Ellis
Freshman Teigh Yeast led Mercer in scoring with 21 points against Mercy Academy on Monday, Nov. 28. The Titans came close to defeating the third ranked team in the state, losing by only three points.

The Mercer County Lady Titans opened their season Monday night against the third ranked Mercy Academy Jaguars. The Titans lost in a last second shot, 57-54, but the game was a tale of two halves. The Titans were down by 19 points, but came out of the second half a different team to tie the game up before a last second 3-pointer ended the almost upset.

The Titans nearly beat Mercy without star player Timberlynn Yeast, who was injured during the scrimmage against Ashland Blazer over the weekend. It took Mercer a while to find their rhythm without her, but post player Lindsay Jessie found a way to handle Mercy’s nationally ranked Leah Macy. Guards Anna Kate Drakeford and Teigh Yeast got hot from the 3-point line and Mercer wouldn’t go down without a fight.

To start the game, Mercer struggled in the paint and Mercy repeatedly pulled down the rebounds, converting them into buckets and immediately jumped out 10-0. Mercy’s defense was relentless, opening with a full court press and a zone defense that was initially impenetrable by the Titans.

Mercer took good shots, but they weren’t falling. Mercer finally got on the board when Teigh Yeast hit one of two from the foul line, 12-1. Junior Peyton Boyd checked in and gave the Titans a little spark with a couple of steals.  Mercer worked the ball around the perimeter trying to find the open shot. Drakeford was fouled, but the foul was called on the floor and the Titans’ fans were not happy about it.