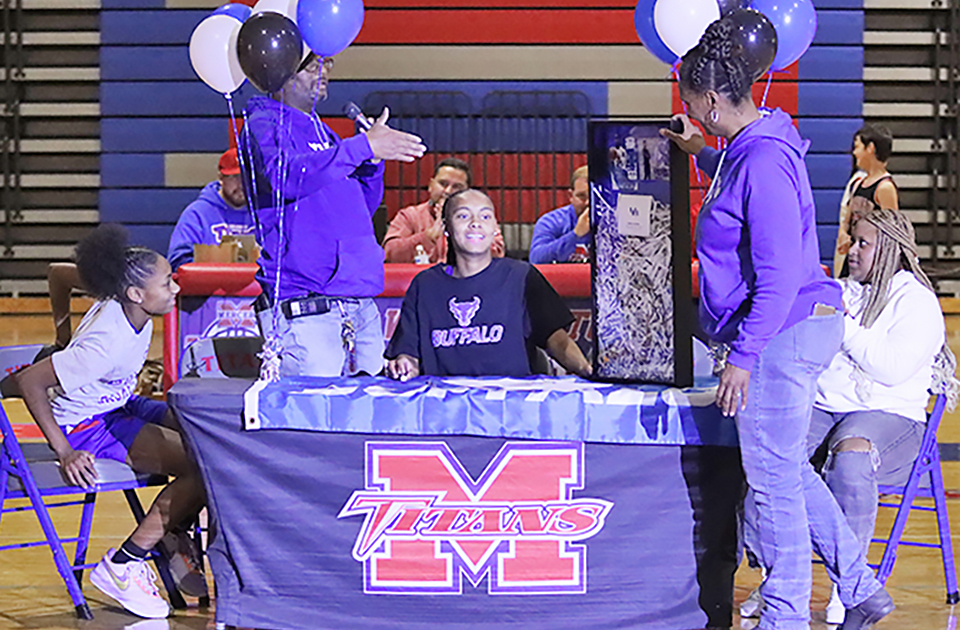 The Harrodsburg Herald/Wesley Bird
Surrounded by her family, Timberlynn Yeast signed with the University At Buffalo at Meet the Titans Friday. Her parents, Terry and Tiffany Yeast, presented her with all the recruitment letters she shredded once she decided on Buffalo. Her sisters Teigh and Trinity joined the celebration.

Mercer County basketball star Timberlynn Yeast signed her letter of commitment to University at Buffalo to play basketball for the Bulls next year. Yeast has been a household name for the Titans girls basketball team for years and has an argument for Ms. Kentucky basketball this year.

The girls basketball team at Mercer have a historic past with two state championships and over a dozen players going on to play at the college level. Yeast has been one of the best to ever wear the red and blue. She’s been playing on the varsity team since the seventh grade and has led Mercer in scoring since the eight grade.

Her career totals heading into her senior season currently set at 2105 points and 995 rebounds. Yeast has played in every varsity game possible with 115 under her belt including back-to-back trips to the 12th Region tournament the past two seasons.

Besides her already stellar high school career, Yeast has also made some noise playing for the West Virginia Thunder in the Girls Next Under Armour Association travel league.

Yeast chose Buffalo after a recruitment trip to New York and falling in love  with the college resulted in her committing on the trip.

“The campus was amazing, facilities were great and the coaches were the best,” said Yeast.

The Buffalo Bulls women’s basketball team is coached by Becky Burke who played for the Louisville Cardinals in college. Yeast already had a good relationship with the coaching staff at Buffalo, but her quick connection with Burke made her  decision a “no brainer.”

The Bulls play in the Mid American Conference (MAC) and had a great season last year finishing 25-9, including a MAC championship and a trip to the NCAA tournament.

“They are doing things in Buffalo and they are committed to girls basketball which really stood out to me,” said Yeast.

It was a match made in heaven for the Yeasts and Buffalo.

“I knew Buffalo was where I wanted to be and my family was happy with the decision  as well,” said Yeast.