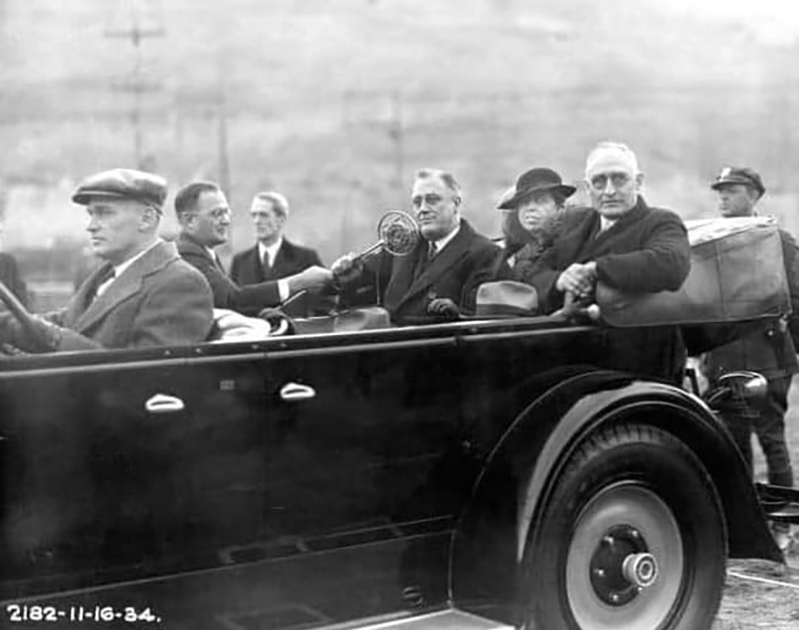 The monument was originally commissioned by the Kentucky Pioneer Association, a group of local citizens who had been working for decades to bring tourists and attention to Harrodsburg. On March 3, 1931, the U.S. Congress passed a bill appropriating $100,000 for the monument to be erected by the War Department to commemorate George Rogers Clark’s campaign during the Revolutionary War. On Nov. 27, Kentucky Gov. Flem D. Sampson, dedicated the monument site.

The First Settlement of the West, the name of the monument, was conceived by sculptor Ulric Ellerhusen and architect Francis Keally. LePoidevin and Company of New York was awarded the general contract. On Armistice Day, Nov. 11, 1933, the cornerstone was laid by Sen. Alben W. Barkley during a ceremony attended by Gov. Ruby Laffoon.

On Jan. 12, 1934, work on the federal monument was halted for three weeks because carvers feared their dull tools would break the granite stones. An expert tool smith, George Webber of Louisville, set up shop in a shed near the carver’s enclosure and work resumed.

That February, sodding, planting and landscaping began around the larger monument. F.C. Byers of Hillenmeyer Nurseries of Lexington, followed the designs of Armistead Fitzhugh, a landscape architect from New York.

The memorial was finally completed on June 12, 1934. Thirty feet long and 12 feet high, it is composed of three granite blocks cemented together. The central section, which weighs 23 tons, depicts George Rogers Clark, the pioneer statesman and military leader. The other two stones weigh 17 tons each. The left section shows a frontier farewell and is symbolic of family life while the right section symbolizes youth and age, with an older man representing famous frontiersmen such as James Harrod and Daniel Boone. The granite stone inlay map on the walking platform in front shows the pioneer routes involved in Clark’s campaign. 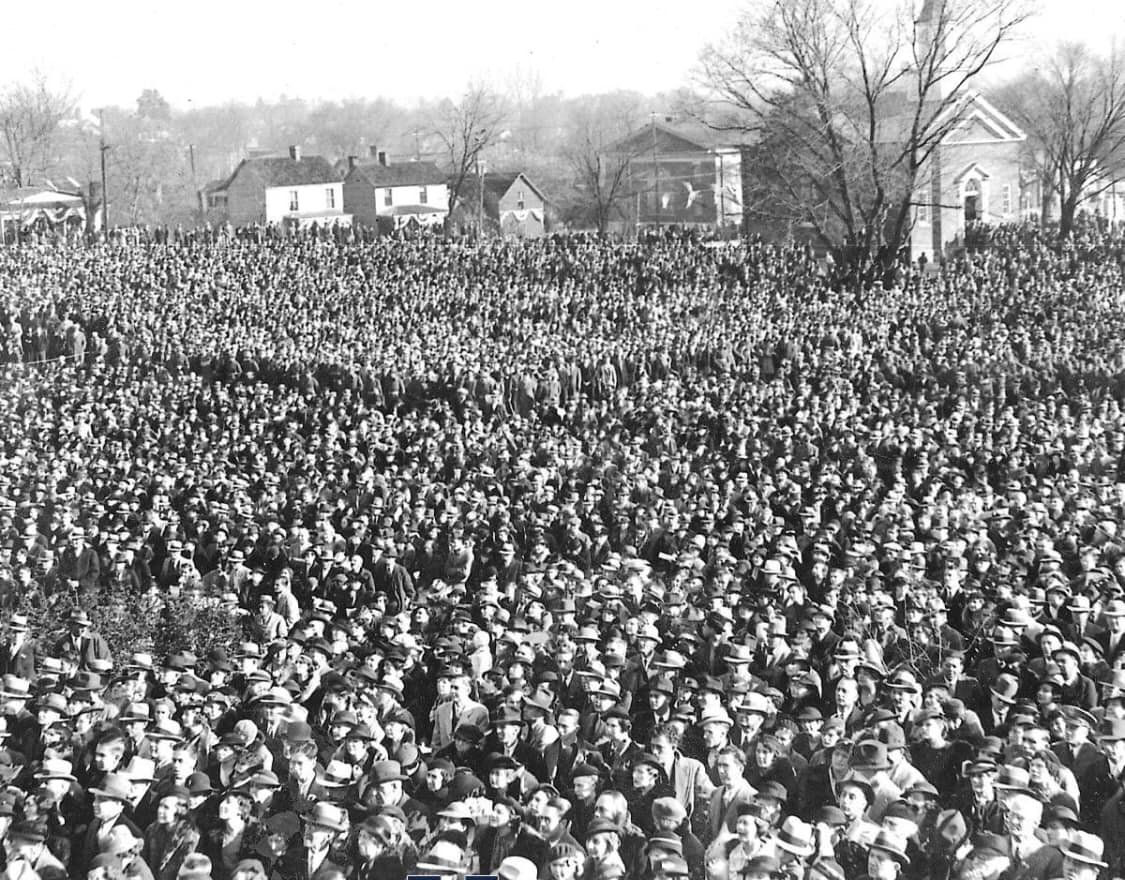 On Nov. 16, 1934, President Franklin D. Roosevelt came to Harrodsburg to dedicate the Pioneer Memorial. The ceremony marked the culmination of a decades-long effort to bring tourists and attention to Harrodsburg. All roads leading into town were choked with traffic. Special trains and buses had been arriving for several days prior. At a time when Harrodsburg had a population of just over 4,000 residents, an estimated 60,000 people filled the park for the dedication ceremony.

The President and Mrs. Roosevelt arrived by train and were welcomed by a town decorated with flags and red, white, and blue bunting everywhere.The monument’s dedication was national news, with the president’s speech printed on the front page of the New York Times.

In his remarks, Roosevelt called for a renewal of the spirit of the American forefathers to face the challenges of the Great Depression. Roosevelt described those in attendance as “the pioneers of 1934.”

“We, too, are hewing out a commonwealth—a commonwealth of the States which we hope will give to its people, more truly than any that has gone before, the fulfillment of security, of freedom, of opportunity and happiness which America asks and is entitled to receive,” Roosevelt said.

Although preparations for the ceremony had taken months of work and hundreds of people, the president’s speech lasted about 10 minutes. He was quickly escorted back to the waiting train and his return trip to Washington. 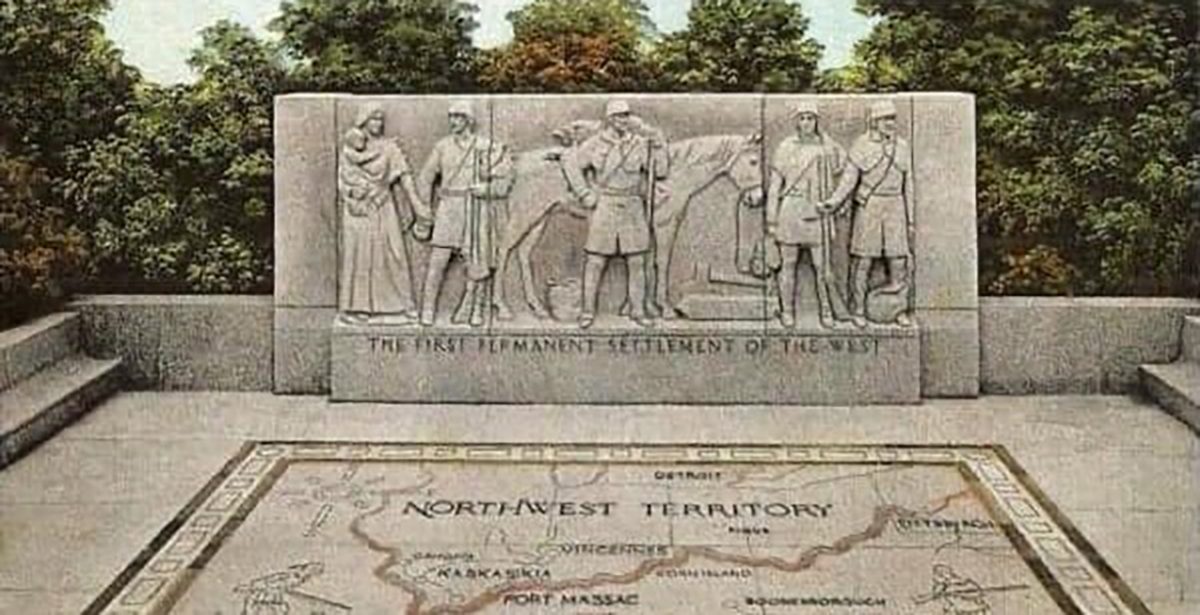 Photo: Rightmyer Collection, Submitted by Author
This postcard shows the detail on the monument as well as the map of the Northwest Territory at the monument’s base.

The plaque on the monument reads: “To that hero and patriot – George Rogers Clark – 1752-1818 – Whose foresight, courage and fortitude gave to his country the vast territory lying between the Ohio River and the Great Lakes.”

The original artist’s rendering and the plaster molds from the project were donated to the Filson Historical Society in Louisville. The chair that President Roosevelt sat in to deliver his address is currently on display at Beaumont Inn and there is a permanent marker at Old Fort Harrod State Park to show the spot where Roosevelt sat.

Local historian Bobbi Dawn Rightmyer has written articles for the Harrodsburg Herald, the Danville Advocate-Messenger, Kentucky Monthly and Kentucky Humanities. Her latest book, “A History Of Harrodsburg: Saratoga Of The South” can be purchased at the Harrodsburg Herald (101 East Broadway) as well as Jerry Sampson Antiques, Old Fort Harrod Gift Shop and the Beaumont Inn. It can also be purchased online at arcadiapublishing.com.

For more great stories, check out the latest issue of the  Harrodsburg Herald. Click here to subscribe.