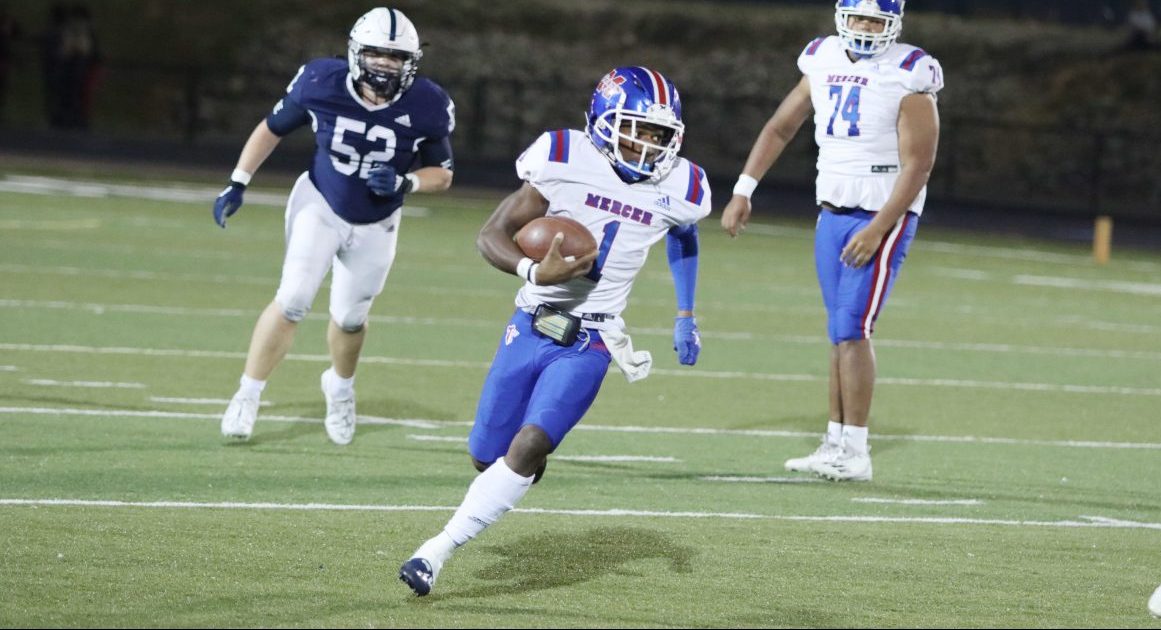 The Harrodsburg Herald/Wesley Bird
Junior quarterback Thaddeus Mays scrambled away from the Panthers’ pressure during Mercer’s 13-49 loss to Elizabethtown in the first round of the playoffs on Friday, Nov. 4.

The Mercer County Titans football team’s (5-6) season ended in the first round of the class 3A playoffs losing 13-49 to the Elizabethtown Panthers (8-3) Friday, Nov. 4.

The Titans gave up too many big plays on the ground letting the Panthers run for 311 yards and five touchdowns on 30 rushes. Mercer had their chances early with freshman Carter Devine getting back-to-back turnovers. The Panthers won the turnover margin with three interceptions and recovered a kickoff.

Mercer’s Gavin Wilson kicked off to begin the game and after a decent return the Panthers offense started on their own 34 yard line. Elizabethtown’s quarterback scrambled for a first down, but the Titans defense buckled down and forced a fourth down and three. The Panthers kept their drive alive and more working the ball down to Mercer’s 21 yard line. Elizabethtown took a shot to the endzone and Devine read it perfectly to come away with the interception.

Junior running back Denim Griffieth busted a 30 yard run on the Titans first play on offense. Mercer stayed hot with Landon Yates picking up a first down with a stiff arm after he caught a pass from Thaddeus Mays. Mays scrambled for a big gain of 26 yards to put the Titans on the one yard line. Griffieth finished the drive with a touchdown and Jase Cocanougher added on the extra point, 7-0.

The Panthers returned the following kick-off out to their own 41 yard line. Elizabethtown picked up 20 yards on a screen pass. They continued to work the ball down to the 20 yard line with their running game until Kingston Mays stripped the ball out and Devine recovered the fumble for the Titans.

Mercer’s offense didn’t go any where with an early incompletion and T. Mays was sacked on third and long. After a Cocanougher punt and penalty on the Panthers, Elizabethtown’s offense started on their own 38 yard line. They found pay dirt in three plays after a 15 yard completion and a 47 yard run down the left sideline, 7-6. Mercer kept a one point lead with senior Morgan Pennington blocking the extra point.

The Titans started the second quarter with the ball at their own 48 yard line and turned the ball over on downs after T. Mays was tackled in the backfield. Elizabethtown picked up a first down on two runs then took a shot to the endzone and the Panthers receiver came down with the ball over two Mercer defenders. Elizabethtown scored the next play with a one yard touchdown run to take the lead, 7-12. They went for two and converted with a short throw to the front pylon, 7-14.