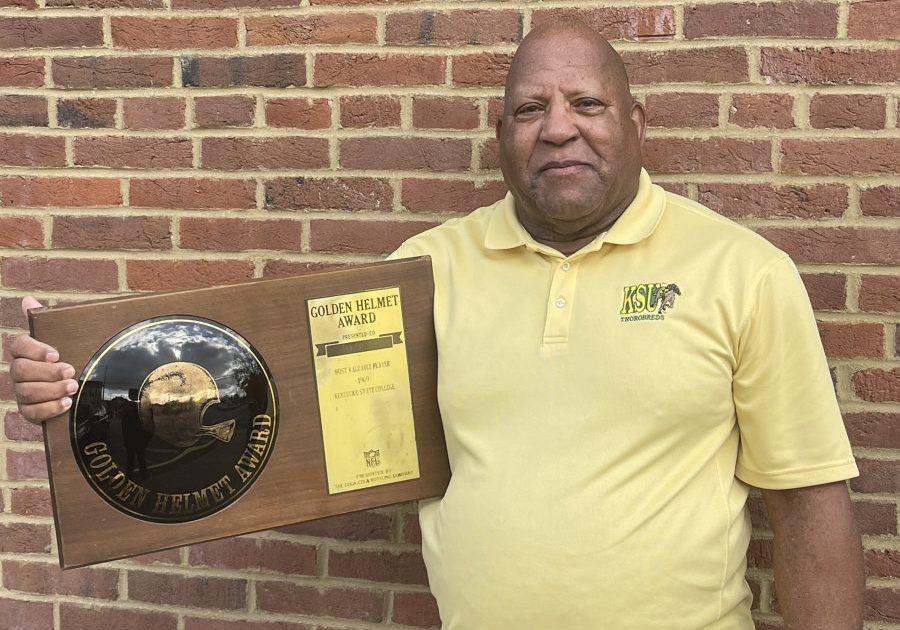 Burgin resident James Dunn was inducted into the Kentucky State University hall of fame on Oct. 14. A standout athlete for Burgin in the early 1960s, Dunn  overcame many challenges in his sports career that led him to becoming a champion on the field and in Mercer County.

Dunn was raised in Burgin. Until the seventh grade, he attended a segregated one room schoolhouse. He took up sports at a young age, excelling in football, basketball and track. Despite his natural gifts, Dunn had to learn to perfect his athletic ability without proper facilities. He and his peers only had access to an outdoor dirt basketball court.

Entering his eighth grade school year, Dunn attended the newly integrated Burgin Independent School. Despite the underlying racism in the 1960s, he did not have trouble making friends and spoke highly of his teachers.  Dunn went on to success in basketball, where he averaged over 20 points per game his senior year at Burgin, earning the nickname “Goose” after Harlem Globetrotter legend Reece “Goose” Tatum.

The same love and acceptance expressed to Dunn from his Burgin teammates and teachers rarely was shown by opponents. As the sole Black player on his team, Dunn was often called slurs and was the recipient of many unnecessary elbows.

“I remember after hitting a game-winning shot, a player from the other team took a swing at me and the next thing I know I am being held by the sheriff.”said Dunn.

Thankfully the Burgin parents came to aid Dunn, and stop any further escalation. But the unfair treatment often carried over after games as well.

“I was not allowed to eat with my team at restaurants. I was handed food through a window while everyone else ate inside. I loved my teammates at Burgin, but other teams and towns sometimes put me in horrific situations.”  Dunn recalled.

There was no denying Dunn was a star on the basketball court. After graduating from Burgin. He received offers from Berea College, Tennessee State and from Head Coach Melville Whedbee at Kentucky State University.

“I had to make my college decision during the turbulent civil rights movement,” said Dunn. “My granny decided she really liked Coach Whedbee and thought it would be a good idea to attend college close to home. She really believed Kentucky State was the best option.”

Taking granny’s advice, Dunn joined the Thorobreds in Frankfort. As a freshman, he started at defensive back and also played baseball as a walk-on left fielder. His freshman year was his only season playing baseball at Kentucky State however, due to the 1967 riots on campus that destroyed some of the team’s facilities.

Dunn turned his focus exclusively to football. He led his team in interceptions for the rest of his career at Kentucky State, highlighted by his senior year in which he recorded six interceptions, with three against Morehead State in his final collegiate game.

His athletic achievements were recognized at the 1969 KSC annual fall sports banquet, where he earned the KSC Golden Helmet Award, representing the most valuable player. Dunn also won the defensive player of the year award. Both were awarded by guest speaker and Buffalo Bills running back O.J Simpson.

Dunn’s impact was not confined to the football field, he was earning a name in the community as well. He spent much of early 1969 advocating as a member of the Student Nonviolent Coordinating Committee (SNCC), helping fellow Black Americans in the voting registration process. This level of commitment and passion for his community was a precursor to Dunn’s life after football.

Asked what advice he had for young people of color considering a historically Black college or university, Dunn said: “I would encourage all people regardless of skin color to consider HBCUs. The love and community I felt while at Kentucky State is something you will not find at a large university.”

After graduation, Dunn signed a free agent deal with the Dallas Cowboys, but due to a leg injury, he retired from football later that year and returned home.

Back in Burgin, Dunn wasted little time making an impact once again. Now a college graduate, he served as manager of employment services for the Commonwealth of Kentucky. He held this position for 29 years, providing jobs and training for countless Kentuckians.

To this day, Dunn and his wife Linda, also a Kentucky State graduate, reside in Burgin. Together they have a daughter, Dr. Tyra Dunn-Thomas. Currently Dunn serves as the president of the KSUNAA Alumni Chapter, along with being a member of the KSU K-Club, chairman of the Mercer County Sanitation District, as a board member for Ephraim McDowell James B. Haggin Hospital and co-founder of the Mercer County Endowment Foundation.

Dunn’s latest award  came Oct. 14, when he was inducted into the Kentucky State University Hall of Fame. Dunn described it as “a true honor” saying the college “made a difference in my life that I cannot put into words.”

Turns out Granny was right. Grannies normally are.

For more great stories, check out the latest issue of the Harrodsburg Herald. Click here to subscribe.