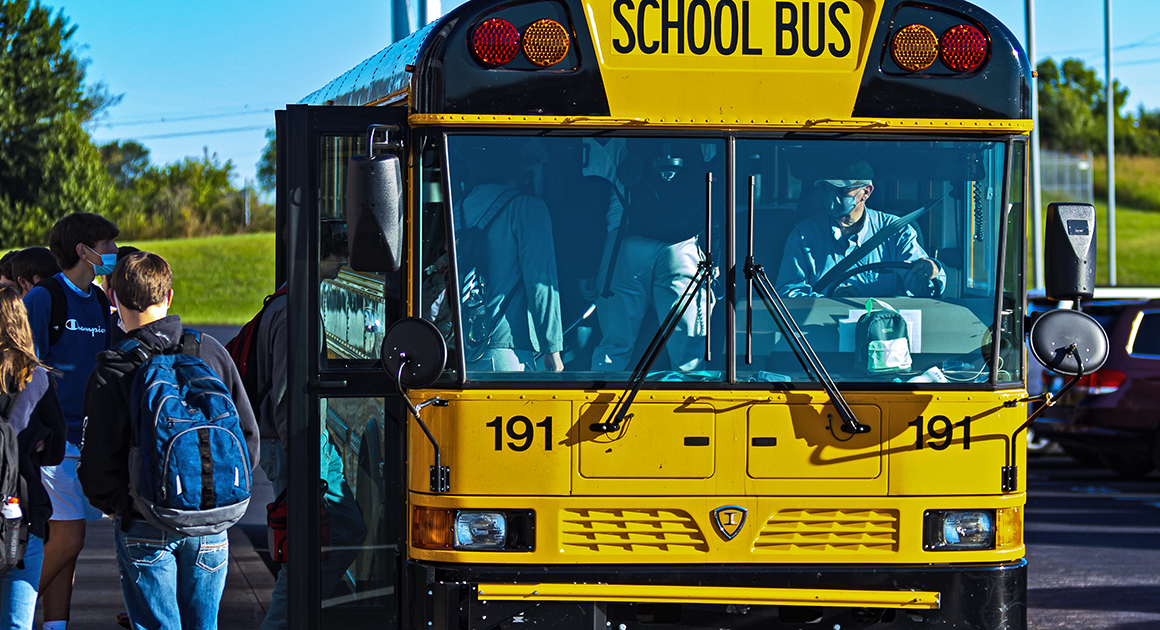 The Kentucky Department of Education has released the annual School Report Card data from the 2021-2022 academic year.

As in previous years, the new color-coded report card has Burgin Independent as one of the best school districts in the area, while Mercer Schools continue to see room for improvement.

The report cards are based on assessments administered to more than 383,000 students in grades 3 through 8 and 10 through 11 during the spring of 2022. Accountability and federal statuses—such as Comprehensive School Improvement and Targeted School Improvement—are being reported for the first time since 2019.

This year’s assessment and accountability report cannot be directly compared to previous years. The state has done away with the five-star system and introduced a new color-coded accountability system ranging from red at the lowest end to blue at the highest end. Districts and the state receive a separate color-coded rating for the elementary, middle and high school levels.

One caveat before we get to the report cards: assessment results are just one of several strategies the state is conducting to evaluate school recovery. State officials warn that a single test score does not provide a complete or precise measure of student achievement.

Families can find the School Report Card online at kyschoolreportcard.com. 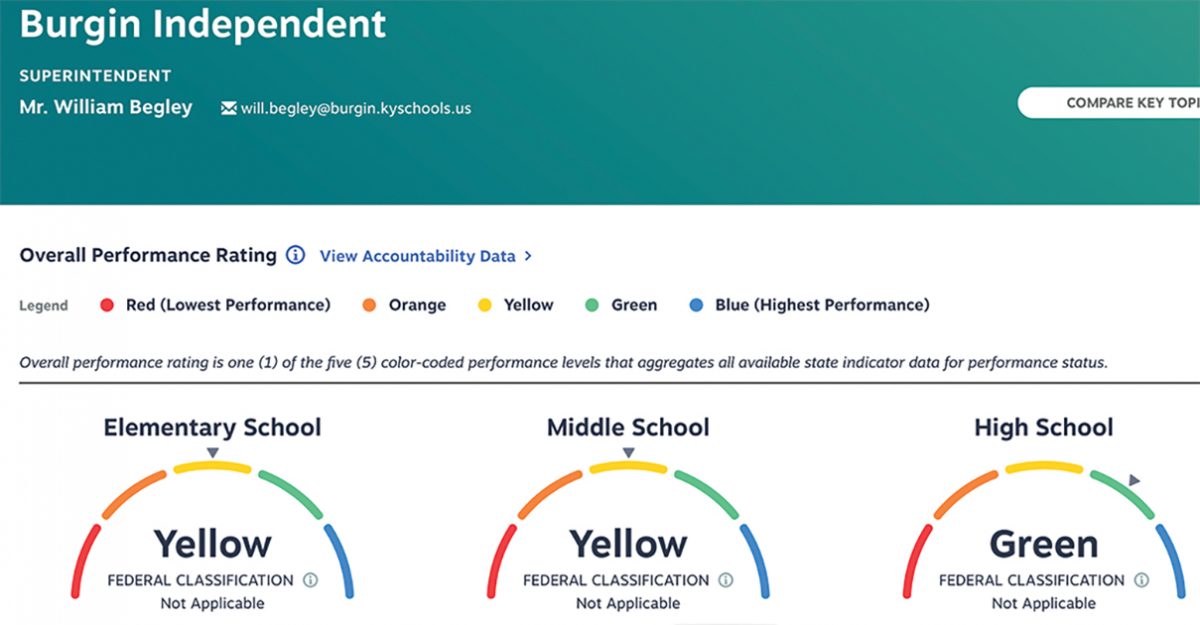 Officials at Burgin Independent are celebrating not just with how well the school did on the state’s report card but their ranking as the 14th best school district in Kentucky according to Niche.com.

Burgin remains one of the top districts in the state. In a press release, officials noted 99.2 percent of Burgin students completed state assessment testing to learn how students were performing academically with the COVID-19 learning disruptions.

“Coming out of the recent pandemic, we ramped up our math and reading interventions by adding additional staff,” said Burgin Superintendent Will Begley. The job they did speaks for itself and the outcome for our students was tremendous.”

“The district will continue to work on strategies that enable students to sustain high growth and achievement,” Begley said. “Our state assessment data only cements the fact that the strategies and interventions by our entire staff is spot on. We will use this information to address gaps caused by the pandemic disruptions and provide the support our students need to be successful.”

Burgin earned an A- overall, collecting A’s in academics, teachers and administration, a B for college prep and C+ for clubs and activities and diversity.

Begley said the state assessment results and Niche.com ranking “…provides more proof that the systems we have in place are effective.”

“Our community is very proud of all the hard work our students and staff put forth,” Begley said. “It also proves that our unique, small school setting provides us the opportunity to focus individually to ensure student success. To have all three of our schools produce results like this is something we will once again celebrate.” 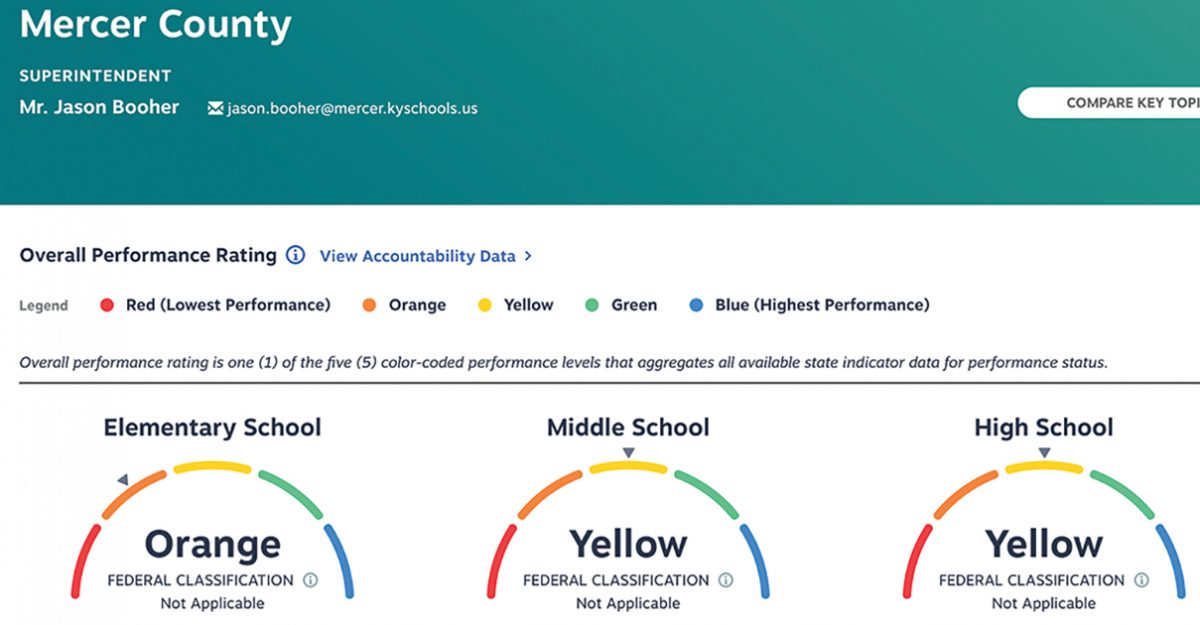 Jason Booher, superintendent at Mercer County said the students and staff had some areas to celebrate.
Booher said students at King Middle School tested at proficient and distinguished levels were above state averages in 7 of 9 testing areas.

“For instance, in 7th grade math nearly half of our students scored proficient or distinguished while the state average was only 37 percent,” Booher said.

In state assessments of reading and mathematics, Mercer County Elementary School was in the orange, the second from lowest, while King Middle School and Mercer County Senior High School were in the middle at yellow.

The superintendent said many educators across the country were expecting testing results to expose great areas of need created or magnified by the learning loss during the COVID-19 pandemic.

“In many ways, it did just that,” Booher said.

The elementary, middle and high schools all were in the yellow for quality of school climate and safety survey.

“Mercer saw great areas of need in 1) proficiency in our elementary students, the very ones that missed a great deal of their formative early education and 2) in the academic success of our Special Education students,” Booher said.

“These results only reinforced conclusions district leaders drew from monitoring students over the past two years,” Booher said. “Our plans for this year already include goals for addressing these concerns.”

Students in middle and high school finished in the yellow, in the middle in most areas, except for state assessments in science, social studies and combined writing, where high school students finished in orange, the second lowest level of five levels.

The assessments were the first performed since the pandemic began.

“As expected, the COVID-19 pandemic has had a profound impact on our students and our schools as they continue to recover from the interrupted learning that occurred over the past two years,” said Education Commissioner and Chief Learner Jason E. Glass. “These assessment results will serve as the baseline from which we will move forward as we look to new and innovative learning opportunities for all of Kentucky’s students.”

Glass said Kentucky’s results are consistent with what other states are experiencing.

“There will be no quick fix for the challenges our students endured during the pandemic,” he said. “It will take time and resources.”

Families can find the School Report Card online at kyschoolreportcard.com.