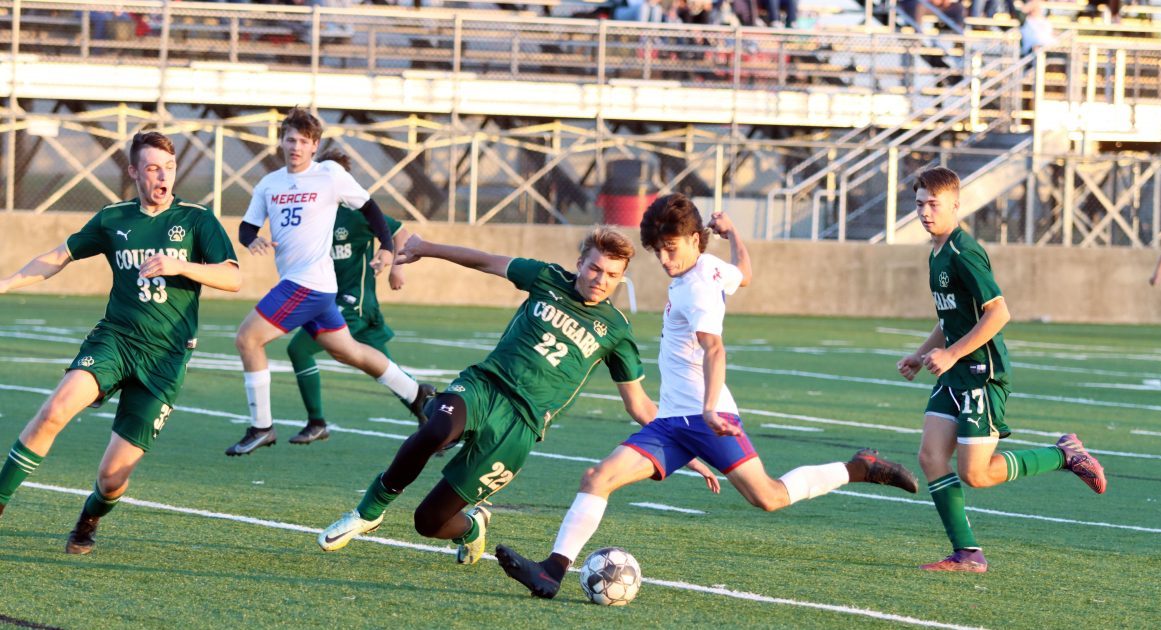 The Harrodsburg Herald/Wesley Bird
Senior Troy Diaz-Ward took the shot in Mercer’s 3-0 win over Somerset Christian in the first round of the 12th Region tournament on Monday, Oct. 10. Diaz-Ward had two assists off corner kicks to Beau Brown to secure the win.

The Mercer County Titans boys soccer team (11-7-3) continued their post season run with a 3-0 victory over the Somerset Christian Cougars (11-5-4) in the first round of the 12th Region tournament Monday, Oct. 10.

Seniors Troy Diaz-Ward and Beau Brown connected for two goals on corner kicks and Gavin Wilson put the game away with a late shot to get the win. The Titans and Cougars tied, 2-2, earlier in the regular season with Head Coach Jeremy Carlson being thrown out of the game for defending his keeper.

Mercer had the first run at the goal with Diaz-Ward crossing the ball into the box, but the Cougars keeper cleared the ball before the Titans could get a shot (8′). Mercer followed up with freshman Jack Gammon passing to Ian Devensky in the box for a shot that was just wide (10′). Somerset Christian tested the Titans defense for the first time with a cross in front of the goal, but senior Kamron Maddox cleared the ball and the Cougars corner kick ended in a very high shot over the Mercer goal (13′).

Somerset Christian stayed aggressive, but Mercer keeper Jase Cocanougher cleared one cross and came out of a busy box with the ball to stop the Cougars (16′, 18′). Somerset Christian looked like they were going to even up the game with an open run to the goal, but the shot was just high (20′).

Mercer’s defense tightened up, creating a chance for Diaz-Ward to take a run, but he was denied twice in the box by the Somerset Christian backline (22′). Diaz-Ward earned a corner shortly after and took it himself finding Brown on the far post for the short shot behind the Cougar defenders for the Titans first goal (24′), 1-0.