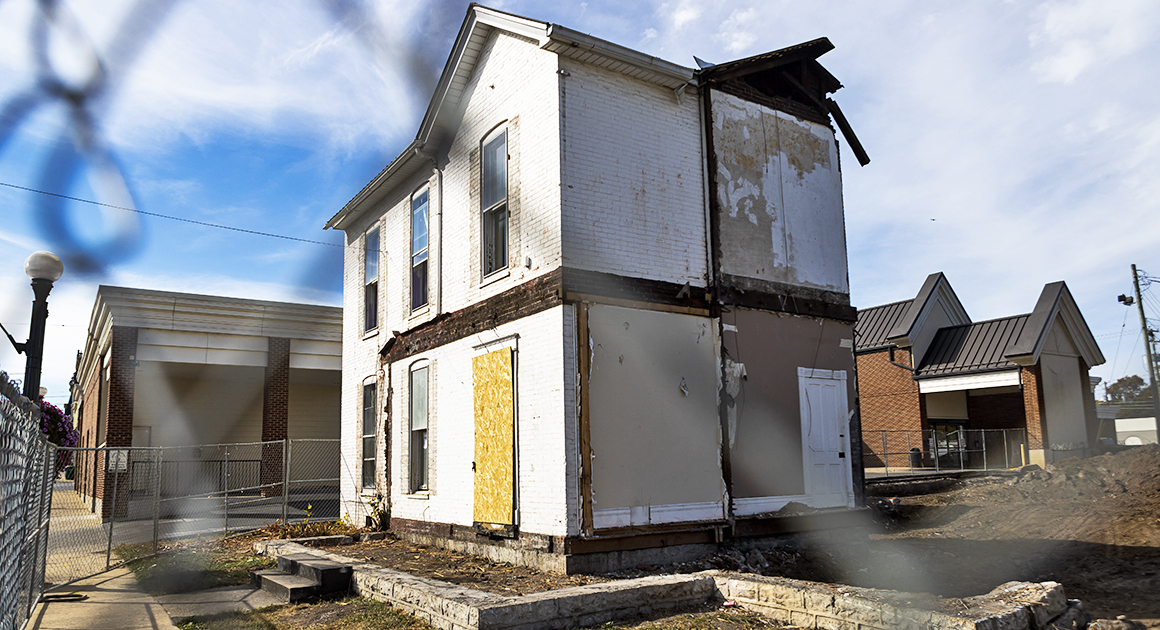 The Harrodsburg Herald/Robert Moore
The Mercer County Public Library is renovating a property to serve as home to the library’s genealogy and local history collections. The nearly $1.4 million project will be completed in 2023, officials say.

The Mercer County Public Library is expanding. The library is renovating the property right next door to the library. Once complete, it will be home to a local history and genealogy research center.

May Construction of Berea is handling the project, which will cost nearly $1.4 million. The construction of the addition will not involve loans, issuing bonds, purchasing new property or raising taxes. This year, the library lowered their rate from 7.6 per $100 in assessed value to 7.2 for both real estate and property tax.

Library Director Robin Ison said the goal is to be finished in 2023 and to have the addition open by Harrodsburg’s 250th anniversary in 2024.

The library has owned the property since 2016. Over the last few weeks, the contractor has removed all the additions to the original brick structure, which still stands. Once the project is completed, the library will be able to move its sizeable genealogy and local history collection, allowing them to use the current genealogy room as a “maker space” where patrons could gain experience working with 3D printing and other technologies. Library officials say the it could also serve as a meeting room. In addition, the project would create several additional parking spaces and provide a green space for outdoor programming.

Library officials say the public feedback has been positive so far. At least one local business owner—perhaps jokingly—has asked the library to buy additional properties in the area for renovation.

The staff are still working on a new name for the new research center. They said they want to work with the Harrodsburg Historical Society, which maintains a research library on South Chiles Street, not compete with them. At Monday’s board of directors meeting, David Kirkpatrick, the assistant director at the library, asked for suggestions.

“I do favor center over library,” Kirkpatrick said.

The board made no decision Monday.

There is a lot happening at the library. Kirkpatrick said 75 third graders from Marion County will visit the library to learning about dinosaurs Wednesday. The exhibit of dinosaurs and other extinct mega fauna will continue until December. 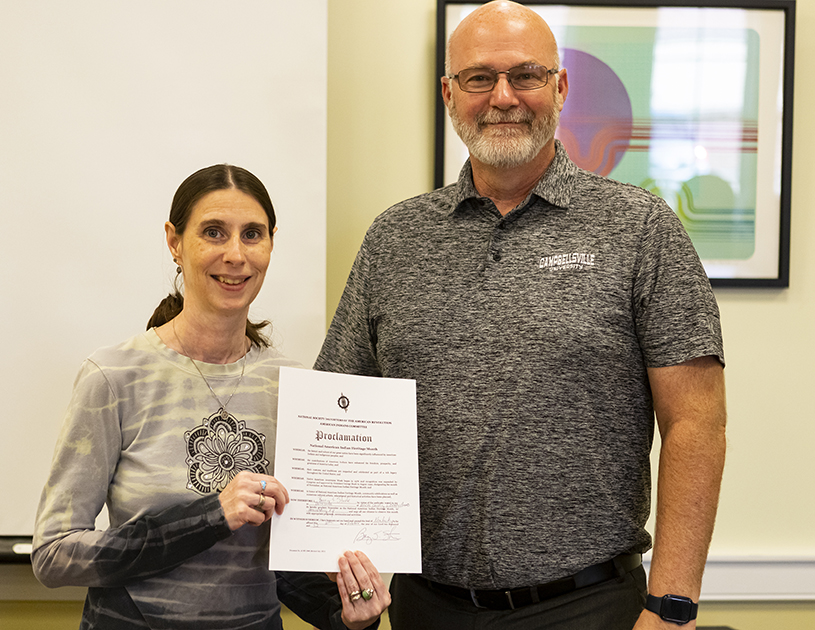 The Harrodsburg Herald/Robert Moore
At their last meeting, the board of directors for the Mercer County Public Library proclaimed November Native American Heritage Month. The library is also considering special programming in November. Above: Gina Harpring, the chair of the of the Jane McAfee chapter of the Daughters of the American Revolution’s Native-American committee holds the proclamation just signed by Barry Steele, the chair of the library’s board of directors on Monday, Oct. 10, which was also Indigenous Peoples’ Day.

The library recently managed to get rid of a lot of stuff at a rummage sale, where they managed to raise $200 which was split between animal shelter and Mercer Transformation.

“It was really a good PR thing,” Ison said Monday. She said the public asked about the project. Next month, the library will host and sponsor the Mercer County Chamber of Commerce Perk Up on Thursday, Nov. 17, starting at 8 a.m. Attendees will get to review drawings and mock-ups for the project.

Ison described the project as a way for the library to expand the service that Mercer County has come to expect from the library.

“We want it to be very, very, very special,” Ison said.

For more information, visit the library’s website at mcplib.info.