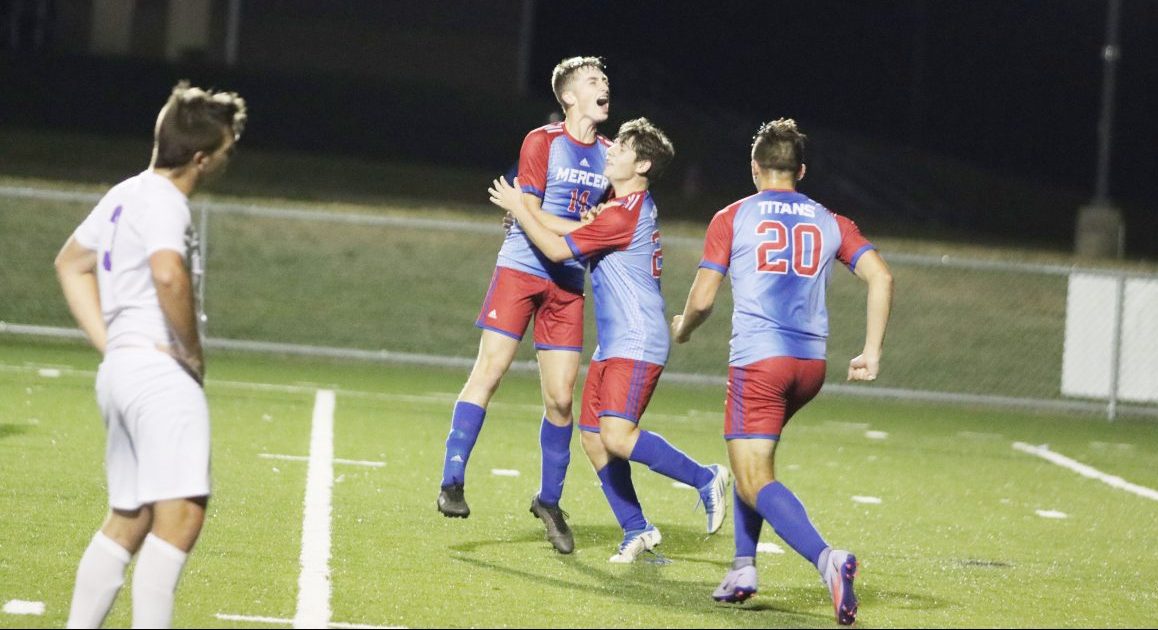 The Harrodsburg Herald/Wesley Bird
Seniors Gavin Wilson, Ian Devensky and Beau Brown celebrated after Devensky’s goal in Mercer’s 6-1 win over Trinity Christian in the first round of the 46th district tournament on Monday, Oct. 3.

The Mercer County Titans boys soccer team (10-6-3) advanced to the 46th district championship with a 6-1 win over the Trinity Christian Titans Monday, Oct. 3. Mercer played West Jessamine (10-6-6) in the championship Wednesday, Oct. 5. The Colts beat East Jessamine, 4-0 to advance to the finals and the winner of districts will host the 12th region championship.

Mercer mercy ruled Trinity Christian the first time they played this season to secure the one seed in the district, but this time around Trinity had more available players and it showed. Mercer Head Coach Jeremy Carlson did play all of his players who dressed with some younger players getting more action than normal.

Trinity Christian tested the Titans back line early with  a good run that was stopped by junior Kyler Sallee (3′). Troy Diaz-Ward had a wide open look at the goal, but was off-sides (9′). Senior Ian Devensky had Mercer’s first good shot set up by Gavin Wilson, but he hit the right post (14′). Goalkeeper Jase Cocanougher had a good save on the other end (16′).

Brown made another run from center field and passed the ball off in the box to Devensky whose shot was caught by the Trinity keeper (19′). Mercer stayed aggressive with Wilson taking two deep shots and Sam Walls having a header saved by the Trinity Titans’ goalie (30′, 32′). Mercer finally found pay dirt with Brown using his speed to get the ball into the box and dumped it off to Devensky who went top left for the goal (38′), 1-0.

Mercer’s defense settled in halfway through the first half which helped create more shots on the other end. Trinity Christian played much better defense this time around and had some early runs, but the offense was still lacking.

Wilson and Brown opened up the second half with some shots, but they were all wide of the goal. Diaz-Ward turned the corner on the Trinity backline to advance the ball into the box and Trinity Christian was called for a hand ball on his cross. Wilson took the penalty kick for the Mercer Titans, he went right and the keeper went left for the goal (55′), 2-0.