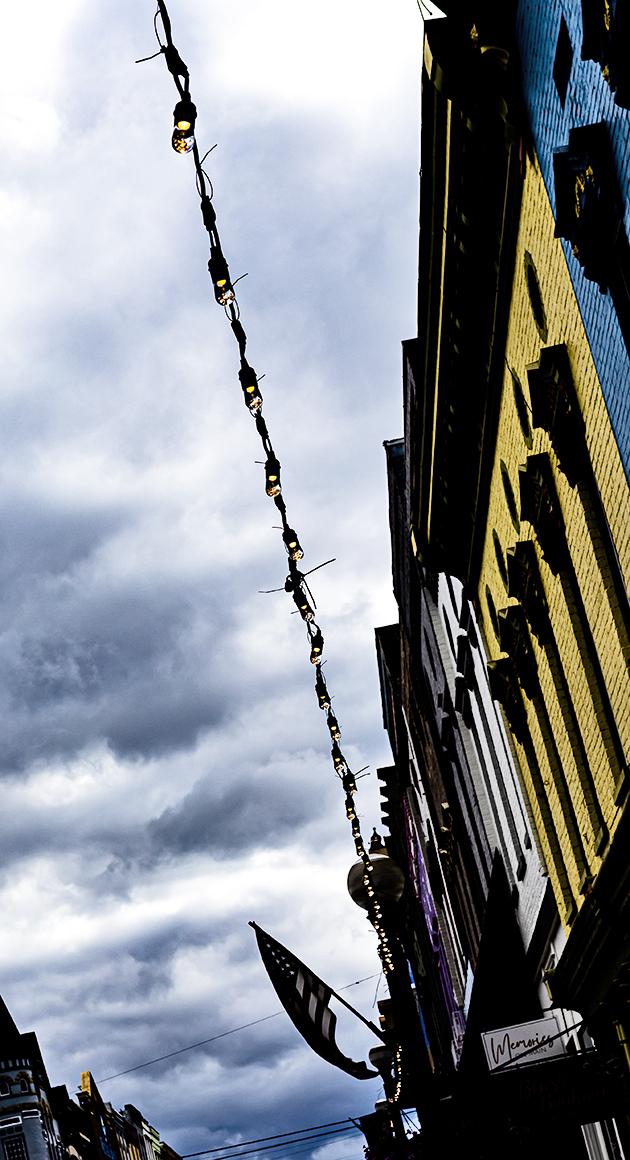 The Harrodsburg Herald/Robert Moore
With the city’s permission, the Harrodsburg First Main Street Program and city workers have extended the lights from the Mercer County Judicial Center to Lexington Street.

With Oktoberfest less than five days away, the Harrodsburg Board of Commissioners approved hanging decorative lights down Main Street, despite the objections of at least one citizen.

At their regular meeting on Monday, Sept. 26, the city commission voted unanimously to authorize Mayor Billy Whitenack—who was absent from Monday’s meeting—to sign a letter agreement which approves the effort by the Harrodsburg-Mercer County Tourist Commission and the Harrodsburg First Main Street Program to hang additional lights from city street poles on Main Street.

The commissioners voted to provide assistance with hanging the lights and to cover the cost of electricity.

All other costs are to be covered by the tourist commission, who voted last month to spend up to $5,000 to expand the festive lights that were strung up around the Mercer County Judicial Center. The lights were put up earlier this year as part of the decorations for the Mercer County Senior High School’s first ever downtown prom. The lights have remained up ever since.

Melissa Wilham Banks, a candidate for the city commission in this year’s general election, questioned the idea of having the lights up permanently.

“Why are my city tax paying dollars going to string lights?” Wilham Banks asked. She complained the lights are on 24 hours a day, seven days a week.

Commissioner Jennifer Kazimer said she had received a lot of positive feedback about the lights.

“A lot of people love them,” Kazimer said.

Wilham Banks said she had heard the opposite from the people she had talked to.

“They don’t like the string lights,” Wilham Banks said. “I think they’re a carnival look.”

Kazimer said the tourist commission, who are paying for the lights from the revenues generated by the restaurant and tourism tax, are limited in how they can spend the money. Kazimer and Commissioner Marvin “Bubby” Isham said the cost of running the lights was negligible for the city, which is not get charged for the electric they use, but by the pole. City Attorney Norrie Currens also pointed out that, according to the agreement, the city can remove the lights at any time. However, this did not assuage Wilham Banks, who said she could go on for days on the subject.

“I think it’s tacky,” said Wilham Banks, who said she thought the lights were not in keeping with the historic nature of downtown Harrodsburg. “I think you could do more for the town than run some lights.”

Kazimer said she and her husband, Tim Kazimer, the chairman of the tourist commission board of directors and the owners of the Vault Ciders, Suds & Spirits on Main Street, have restored three buildings in downtown Harrodsburg. While she said she shared Wilham Banks’ concern for preserving Harrodsburg’s history, she also noted that the city is nearly 250 years old.

Kazimer also announced the tree committee is looking for locations for trees. The commissioner asked the public to let her know where they think more trees need to be planted around the city.

Kazimer also asked the other commissioners about the corner lot across from Old Fort State Park. The commissioners discussed holding a special-called meeting at that location, but made no decision.

In other business, the Harrodsburg City Commission set the tax rates for the new fiscal year. At a special-called meeting last week, the city commission voted to take the compensating rate—which is calculated by the state to generate the same tax revenue produced the preceding year. Last year, the city charged .0697 per $100 in assessed value for real and personal property. The new rate approved by the city commission is .0690 per $100 in assessed value.

The commission also gave second and final reading approving the ad valorem tax on motor vehicles at 0.23 per $100 in assessed value, which is unchanged from last year.