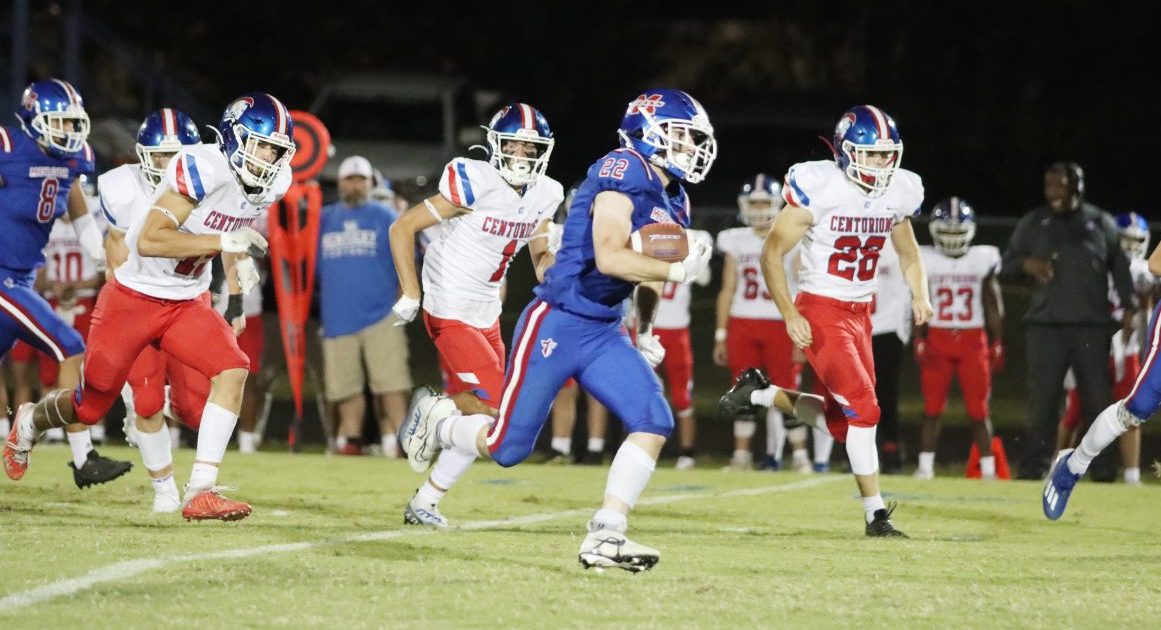 The Harrodsburg Herald/Wesley Bird
Junior Denim Griffieth had Mercer’s best play with a long run up the middle which put the Titans on the goal line in their homecoming loss to the Centurions on Friday, Sept. 23.

The Mercer County Titans football team (2-4) lost, 7-51, to district powerhouse Christian Academy of Louisville (CAL) in the Horn Home Improvement Homecoming game Friday, Sept. 23. The undefeated Centurions (6-0) were the favorites entering the game, but the Titans did themselves no favors turning the ball over three times and giving up a special teams touchdown in the first half.

Mercer began the game with the ball and quarterback Thaddeus Mays was sacked on the first play leading to a punt for the Titans. The Centurions started their first offensive drive on their own 47 yard line and picked up 33 yards on a run that bounced outside. Mercer’s defense stopped CAL the next three plays with senior linebacker Andrew Sheperson making a good tackle in the back field and the Centurions dropping a pass on third down. CAL’s 20 yard field goal was good to take the lead, 0-3.

The Titans picked up a first down behind Denim Griffieth earning a tough six yards between the tackles and freshman Ashton Drakeford catching a six yard pass. Griffieth picked up another first down on the ground, but Mays was strip sacked which the Centurions returned for a touchdown, 0-10.

Mercer’s offense went three and out sending out the punt team. Jase Cocanougher dropped the snap giving CAL a chance to tip the punt and run it in for another touchdown, 0-17. The Titans next snap on offense was a fumble from Griffieth giving the Centurions the ball on Mercer’s 22 yard line. CAL scored on the next play with a 20 yard catch and run giving them their first offensive touchdown, 0-24.