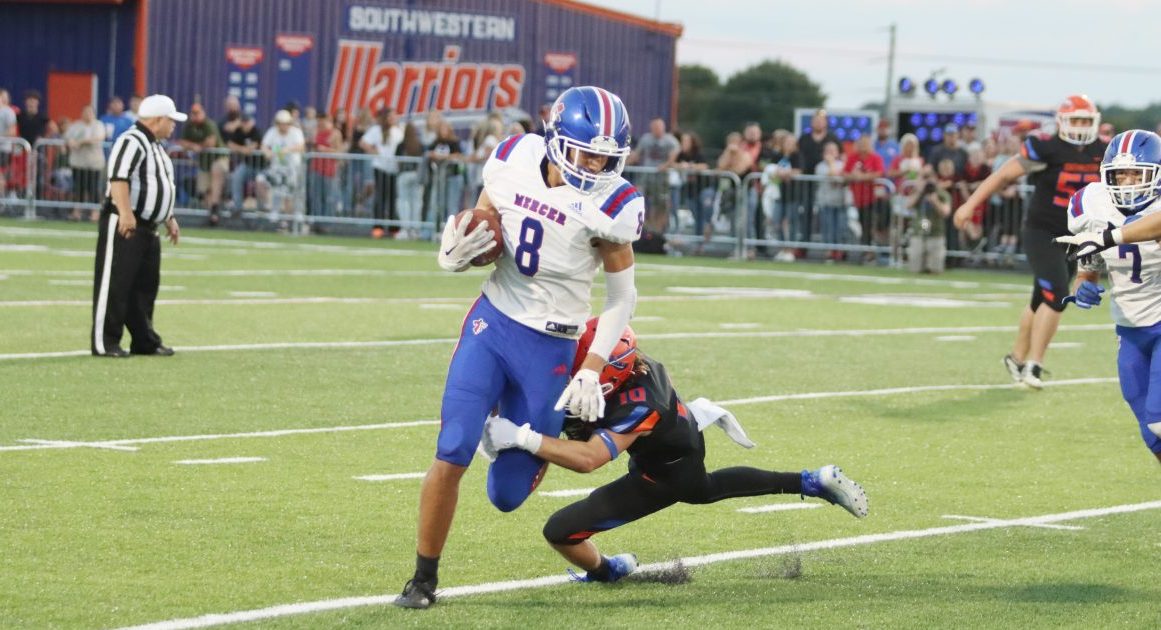 The Harrodsburg Herald/Wesley Bird
Junior Jackson Perry made the catch and got up the field in the Titans’ 13-35 loss to the Southwestern Warriors on Friday, Sept. 16.

The Mercer County Titans football team (2-3) suffered a road loss, 13-35, at the Reservation to the Southwestern Warriors Friday, Sept. 16.  Mercer looked competitive early, but couldn’t find any offensive rhythm in the second half and their defense wore down.

Southwestern started with the ball on their 20 yard line after a Gavin Wilson touchback. On the sixth play of the drive, the Warriors  broke a 60 yard touchdown run after getting the edge to take an early lead, 6-0. Southwestern did miss the extra point attempt. The Titans offense opened up with a first down on a face mask and quarterback Thaddeus Mays completed passes to Jackson Perry and Landon Yates to move the sticks again.

Mercer stuck to the short passing game with senior Tytus Weldon picking up seven yards and freshman Ashton Drakeford hauling in a 13 yard reception. Senior running back Morgan Pennington had his first carry of the night for four yards in place of Denim Griffieth who was out sick. On third down and 10 yards to go on the Southwestern 22 yard line Mays found Perry again who ran over a Warriors defender to get into the endzone, 6-6. Jase Cocanougher added on the extra point with Mays holding and Garret Fister snapping, 7-6.

Southwestern answered the Titans touchdown quickly with chunk plays of 34 and 19 yard pick ups capped off by a 25 yard touchdown completion into the endzone, 7-14. The Titans next offensive drive was handicapped by a delay of game they couldn’t overcome sending out Cocanougher to punt the ball from the Warriors 36 yard line. Cocanougher ended up having to make the tackle on a good return from the Warriors, but a penalty put Southwestern offense on their own 10 yard line.