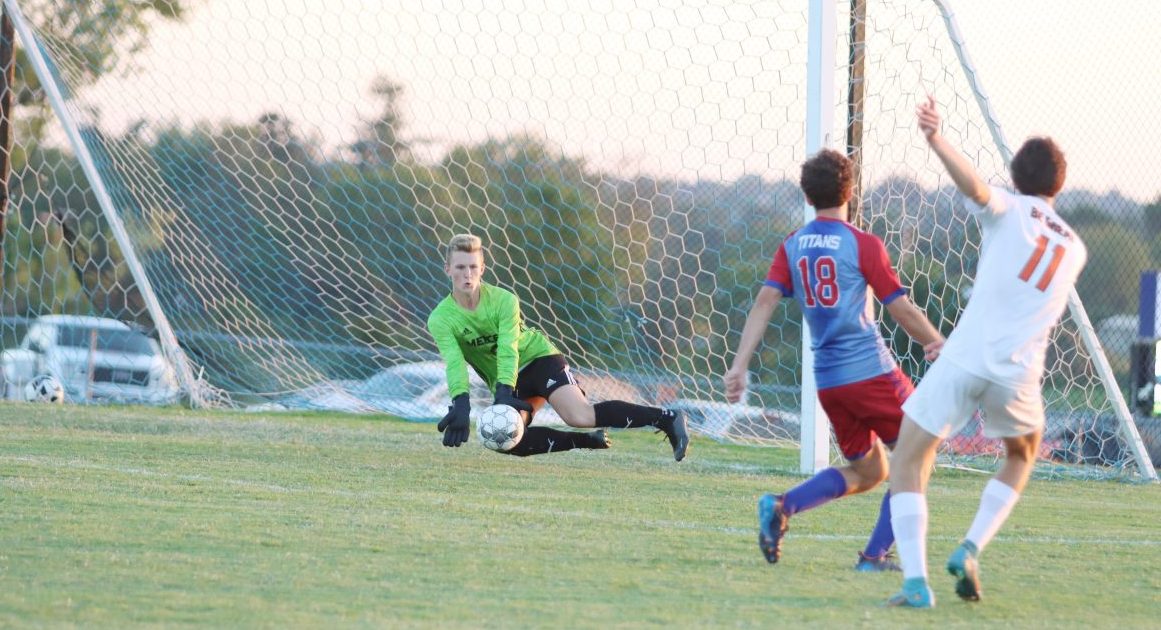 The Harrodsburg Herald/Wesley Bird
Senior Jase Cocanougher blocked a shot from a Frederick Douglass striker in the Titans’ 1-4 loss to the Broncos Thursday, Sept. 8.

The Mercer County Titans boys soccer team (5-4) had their toughest test yet this season with the Frederick Douglass Broncos (9-1-0) coming to town Thursday, Sept. 8. The Titans fell 1-4 to the third ranked team in the state with Aaron Steele serving as the head coach as Jeremy Carlson served his red card suspension.

The Broncos got off to an early lead scoring in the second minute of the game with an aggressive run down the right sideline and a shot that went far post, 0-1. Senior Mercer goal keeper Jase Cocanougher had a busy night starting with a save from a shot in the box (8′). Frederick Douglass stayed on the offensive with a shot over the goal and a corner kick that sailed well over the box (10′, 12′).

After a diving save from Cocanougher, Mercer had it’s first trip in to Bronco territory with Beau Brown setting up a run down the middle for Forte Bess that resulted in a corner kick for the Titans. Frederick Douglass responded with a shot that Troy Diaz-Ward blocked and a deep shot that hit the cross bar of the goal (19′, 22′).

Bess had a good look at the goal after a run down the left sideline, but his shot went just left of the goal (26′). The Titans defense continued to stop shots with Brown clearing the ball from the box and Cocanougher blocking a close shot on goal (31′, 34′).

The first half wrapped up with Cocanougher registering a save off a free kick from the Broncos (38′). The Titans gave up a goal early, but their defense held their own and Cocanougher played a great first half. The Titans couldn’t create much offensively with only Bess getting a few looks at the goal.