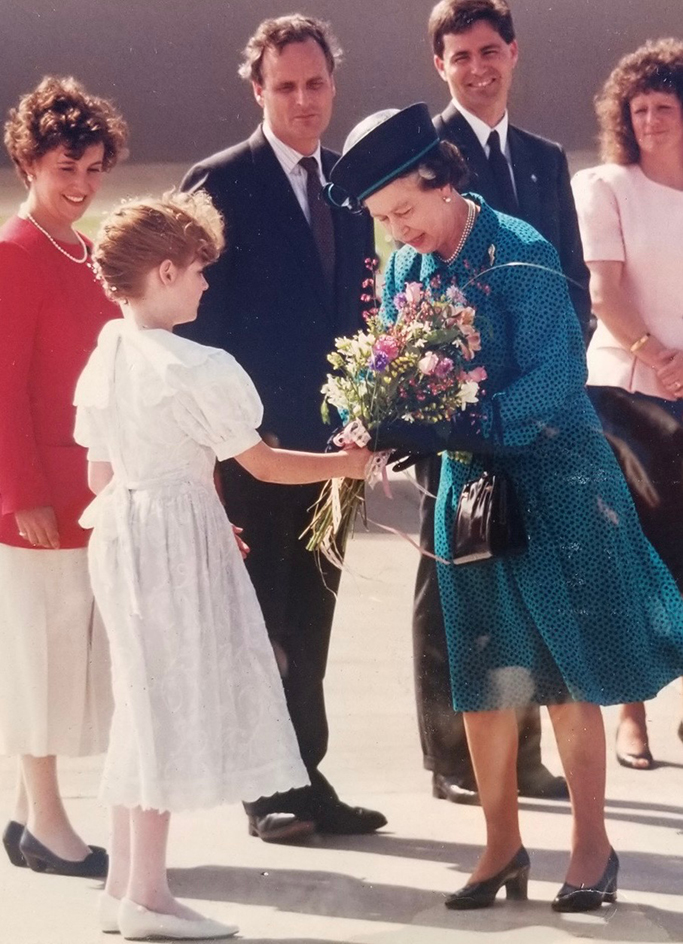 Photo Submitted
At the age of 10, Amanda Case Chambers greeted Queen Elizabeth II at Bluegrass Airport on one of the queen’s trips in 1989.

Queen Elizabeth II, Queen of the United Kingdom and other Commonwealth realms, passed away last Thursday, Sept. 8. Known worldwide for her affinity for horses and dogs, Kentucky seemed to be a favorite of hers. She took only six vacations throughout her reign that didn’t involve her royal duties and they were all to the Bluegrass State.

Harrodsburg natives Amanda Case Chambers and Brenda Bentley Pruitt shared a brief connection with the Queen over her love of the state.

Chambers was 10 years old in 1989 when the Queen flew into Bluegrass Airport. Chambers presented her with a bouquet of flowers.

“Once the Queen arrived and exited the plane, I remember being surprised at her appearance,” said Chambers. “I think I expected her to have a crown and to be wearing robes.”

Chambers knew the moment was special, but didn’t realize its significance until she was an adult.

“I handed the flowers to her, curtsied and smiled. I remember how she took time to look at the flowers and then thanked me,” she said. “Meeting the Queen has served as a reminder for me that everyone, rank or title aside, is human. I still remember her smile and the way she looked at those flowers that day.”

In 2011, Pruitt and some of her friends won a trip to England as part of a charity auction. The timing coincided with Prince William’s wedding to Kate Middleton. The group were able to find a spot where they could easily see the Royal procession and it sparked a deep interest in the Royal family for Pruitt. The group of friends returned to England two more times, for Prince Harry’s wedding to Megan Markle in 2018 and the Queen’s Platinum Jubilee this past February.

“After attending the events in England, I just fell in love with the Royals and read books and followed them,” said Pruitt. “It is very fascinating to think she [the Queen] is the most famous person in all the world.”

As she learned about the Royal family, she became impressed with the amount of charity work and their generosity.

“The Royal family members give a lot of their time to raise money and awareness for issues. Some are involved with 200 to 250 charity events a year,” said Pruitt.

After painting landscapes and portraits for nearly 30 years, Pruitt decided to paint the Queen in one of her iconic pink suits and hat. She always wore bright colors so people could easily identify her.

After working on the portrait on and off for over three months, Pruitt completed it and was able to ship it to Buckingham Palace. She was surprised to receive a response marked as Royal mail and a thank you letter written by one of the Queen’s Ladies In Waiting thanking her for the gift.

“I feel like I caught their attention because I had written a nice letter with the painting explaining I was from Kentucky and shared the Queen’s love of horses,” said Pruitt.

After a year of mourning, Prince Charles, now King Charles III, will have his official coronation. Pruitt and her friends, who affectionately call themselves the Ladies in Waiting, will once again travel to England to be a part of the Royal ceremony.