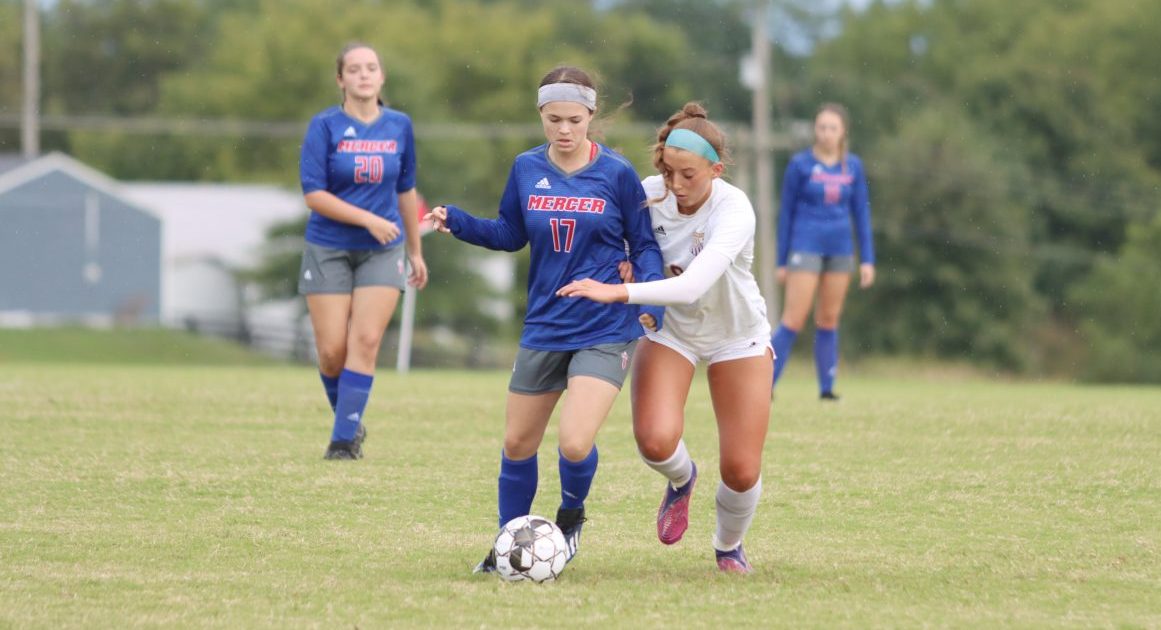 The Harrodsburg Herald/Wesley Bird
Junior Presley Boyne fought for possession during the Titans’ 1-3 loss to the Somerset Briar Jumpers on Saturday, Sept. 10.

The Mercer County Titans girls soccer team (4-6-1) lost a scrappy game to the top team in the 12th Region with the Somerset Briar Jumpers (7-1-1) winning 1-3 Saturday, Sept. 10. The Briar Jumpers had multiple players get injured and two yellow cards and a red card were issued in the game.

Somerset had the first look at the goal with a free kick that crossed the goal untouched (2′). The Briar Jumpers were successful their second attempt at scoring with a kick going off a Mercer defender in the box and into the goal (4′), 0-1. Blaize Sims, Sarah Porter and Ryleigh Sipe stopped the next three shots in the box as Somerset ruled time of possession.

Mercer had their first trip down the other way with  freshman Kiley Waldridge earning a corner kick for the Titans (12′). The Titans showed pressure on offense, but Somerset flipped the field quickly and got a shot off that hit the cross bar (16′). The Briar Jumpers scored their second goal shortly after with a far outside shot that went top left past Sipe (17′), 0-2.

Mercer had a chance when Laykin Irvin served a perfect ball to McKinley Stagner in scoring position with the keeper out of the goal, but she couldn’t get a shot off (18′). Sipe held strong in the goal with two stops and Porter cleared another potential goal (25′, 28′). Sims caught an open run from Somerset as the Mercer defense stayed busy (29′).

The Titans scored with Irvin winning the ball in the air and hitting a rocket of a shot from deep that the Somerset keeper was not expecting (33′), 1-2. The first half ended with Sipe getting another save and Mercer not executing a free kick well around the Briar Jumpers’ goal.