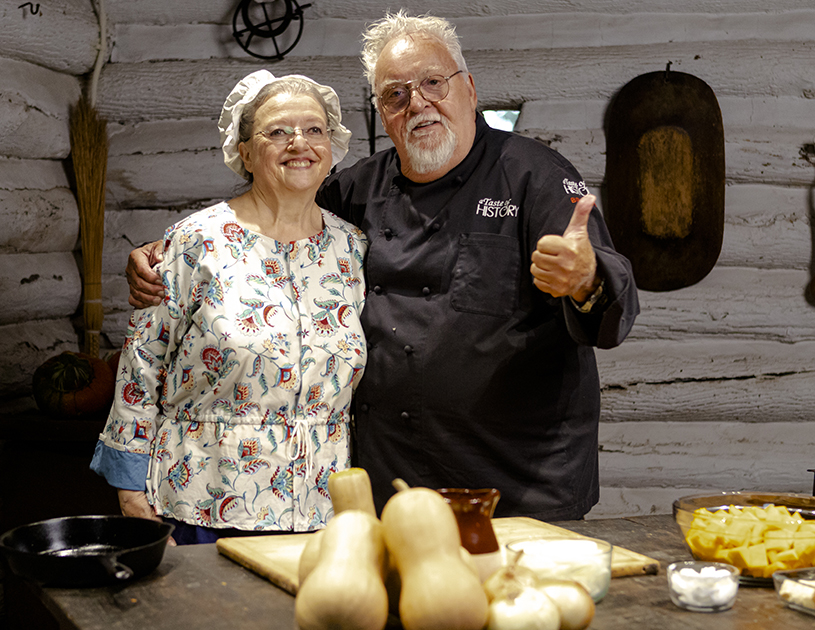 The Harrodsburg Herald/Robert Moore
Mary Barlow, an interpretive cook at Old Fort Harrod State Park, prepares to cook a colonial-style meal with Chef Walter Staib, the host and executive producer of the PBS series “A Taste Of History.” Staib and his crew filmed at the fort and around Harrodsburg earlier this week.

“It’s been a long time in coming,” said Chef Walter Staib—also known as Chef Walt—the host and executive producer of “A Taste Of History.”

On Monday, Staib was standing outside the George Rogers Clark Blockhouse, where he was going to learn how the founders of Harrodsburg, the oldest town in Kentucky, would have prepared a meal. He would be working with interpretive cook Mary Barlow on fixing a meal including elk and goat soup using period authentic tools such as the cob oven at the McGinty Ordinary. Staib called it “a beautiful menu.”

“You had to make sure you still got your provisions,” Staib said of Harrodsburg’s colonial past. “I really want to keep it as close as I can.”

“A Taste of History,” is an Emmy Award winning series that recreates culinary heritage by cooking historic recipes at original locations across the globe, according to the show’s website. The series, which is now filming its 13th season, has been everywhere from the Galapagos Islands to Thomas Jefferson’s Monticello.

“We try to portray in the best possible way the history,” Staib said.

“We’ve been admiring Fort Harrod for a long time,” Staib said. He said he’d spent two hours Sunday talking with the gunsmith at Old Fort Harrod. He said the series had tried to film at the fort before, but things—including the COVID-19 pandemic—kept getting in the way.

“A Taste Of History” bills itself as one-part cooking, one-part history with a dash of humor and a whole lot of personality. A lot of that humor and personality come from Chef Walt, the proprietor of the City Tavern in Philadelphia for over 26 years, the author of seven cookbooks and veteran TV chef who has made numerous appearances on local and national cooking shows, such as 60 Minutes, the Today show and the Food Network’s “Best Thing I Ever Ate” and “Iron Chef.”

Staib said Barlow, who has been an interpreter at Old Fort Harrod for more than 16 years, was going to be bossing him around the colonial kitchen.

Barlow said she can usually be found over at the Ordinary, where she portrays Ann McGinty and demonstrates colonial skills such as candle making in addition to cooking. Barlow said she was excited to be working with Staib and to be able to spread the word about Old Fort Harrod, which she called a “very special place.”

“This is where Kentucky started,” Barlow said as she went over the ingredients with Staib. “This is going to be a plus for us.”

On Tuesday, Staib said his crew would be shooting B-roll, supplemental footage, which would be edited into the program. Staib said the editing is key on the series, which has won 15 Emmies. They would not only be filming at the fort, but around Harrodsburg as well, he said.

“We try to give the viewer as much authenticity as possible,” Staib said. “We don’t want to leave anything out.”

He said “A Taste Of History” had most recently filmed an episode in Maine, where he’d gone clamming. Staib had nothing for praise for the staff at Old Fort Harrod and he praised the fort itself.

When the episode airs next year, Staib said he hopes it inspires viewers to “jump in the car and go to Harrodsburg.”

But first he had to learn how to fix elk and goat soup with Barlow. Staib clapped his hands and walked inside the block house.

“A Taste Of History” is broadcast on PBS member television stations and is available to stream on Amazon Prime and Tubi. The series can also be seen on the Hungry Channel App on Amazon Fire, ROKU, Redbox TV and Rakuten devices.