Exhibit At The Library Takes You Back—Way, Way Back 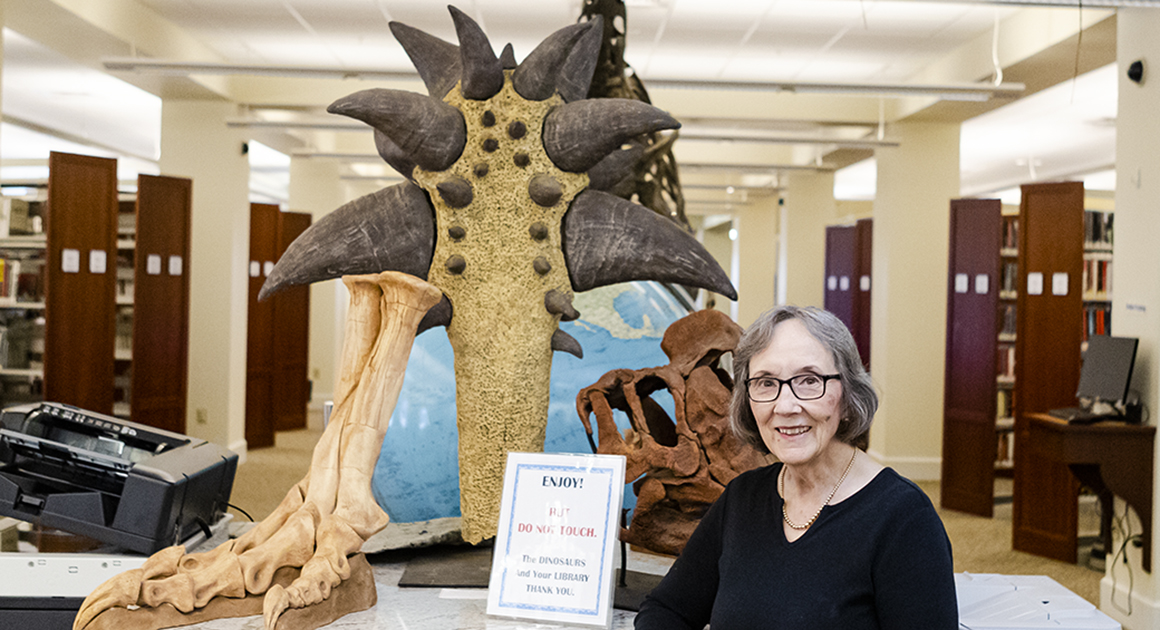 The Harrodsburg Herald/Robert Moore
Robin Ison, director of the Mercer County Public Library, poses with one of her favorite fossils currently on display at the library, the tail of a glyptondont, an armored herbivore that weighed two tons and went extinct at the end of the last ice age. The fossils are on exhibit through September.

There are a bunch of old fossils hanging out at the Mercer County Public Library. They’re dinosaurs and other extinct mega fauna—or what’s left of them—and they’re all over the library, greeting visitors by the door, skittering along the bookshelves and even warming their bones by the fireplace.

The fossils are on exhibit at the library through September, and the staff are asking everyone to check them out. 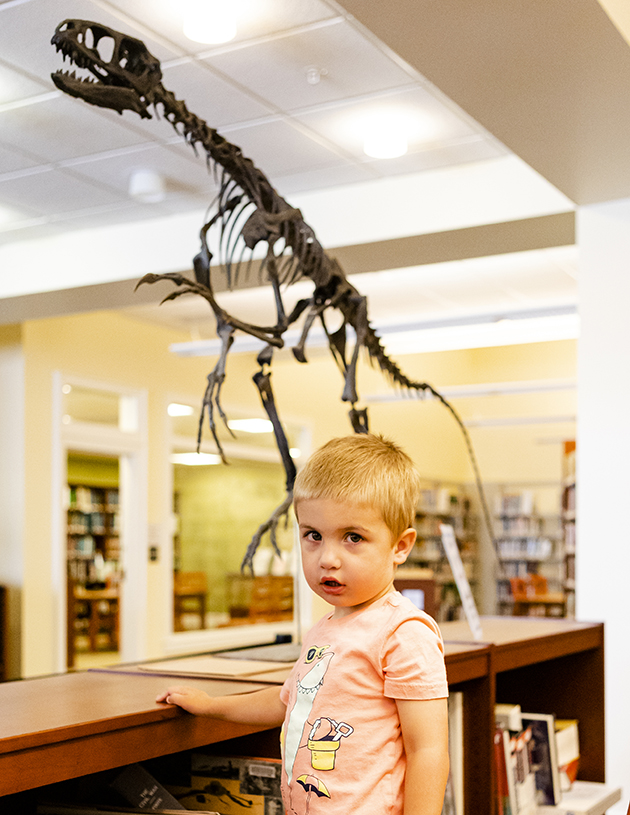 The Harrodsburg Herald/Robert Moore
Carter Davis looks a little unsure about standing so close to a zuni raptor, a native of the cretaceous that went extinct some 90 million years ago.

The fossils belong to Danville dentist Dr. Jack Hankla, whose family are some of the nation’s leading fossil collectors. They rent out fossils to museums and movie studios, and their collection has been featured in several Jurassic Park movies. The family also loans them out to libraries and museums, which is how they ended up in Harrodsburg.

“He’s always been very supportive of our library,” said Ison, who said

Hankla has previously contributed to an exhibit on minerals.

Ison said some of the pieces currently on exhibit were also shown at Boyle County Public Library last year.

“Ours has different pieces than they had,” Ison said.

Her favorite is the glyptodont tail located in front of the circulation deck. Glyptodonts were a species of mega fauna related to the armadillo that went extinct at the end of the last ice age. Glyptodonts were armored herbivores—plant eaters—but they weighed as much as two tons and they could use their tails, which were spiked like medieval maces, to ward off predators.

“Can you imagine something this big carrying this thing around?” Ison asked.

No dinosaur fossils have ever been discovered in Kentucky, although the commonwealth has abundant fossils of other geological epochs, such as plant fossils from the cretaceous and the fossils of invertebrates from more than 2.5 million years ago discovered in Fayette County, according to the Kentucky Geological Survey. But dinosaur exhibits are rare, so Ison and the library staff invite you to come out while they’re here. Even if you’ve already seen the exhibit once, Ison invites everyone to come back again.

“Every time they come in, they see something different,” Ison said. “It’s hard to take it all in.”

The Mercer County Public Library is located at 109 West Lexington Street. The library is open Monday through Saturday from 9 a.m. to 5 p.m. For more information, call 859-734-3680 or visit mcpl.info.