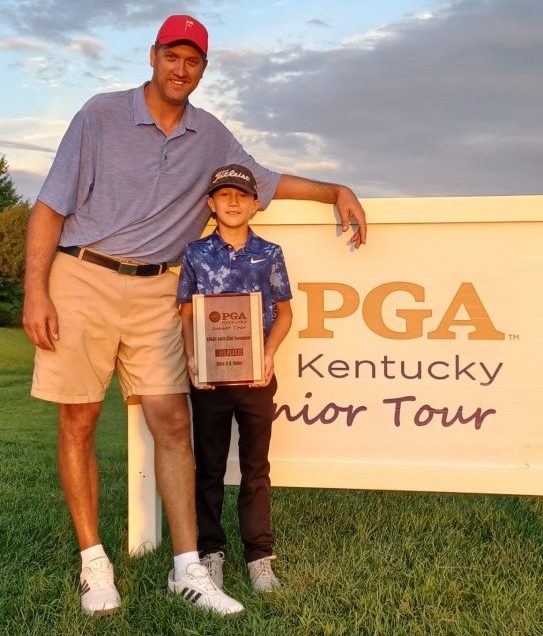 The Harrodsburg Herald/Wesley Bird
Will and Harrison Carlton won their second consecutive Junior PGA father-son golf scramble with a score of six under par Aug. 7.

The Carltons participated in the eight and under division at the Bardstown Country Club. The scramble rules require the junior team member to take at least one shot per hole on the 18 hole course which has a par score of 72 strokes.

The Carlton team had a great outing with 12 pars and six birdies to finish the day six under with a final score of 66 to edge out the second place team who finished four under. It came down to the final hole with the Carltons having a one stroke lead over the field.

Will gave all the credit to his son Harrison who clutched up on the last hole with a perfect drive to set up a 15 foot birdie putt to win the match.

“His back was sore after the round from carrying me around all day,” joked Will Carlton.

Harrison has competed in four tournaments this year on the Kentucky PGA junior tour winning one and placing second in the other three. He is currently ranked second overall in the eight and under division.