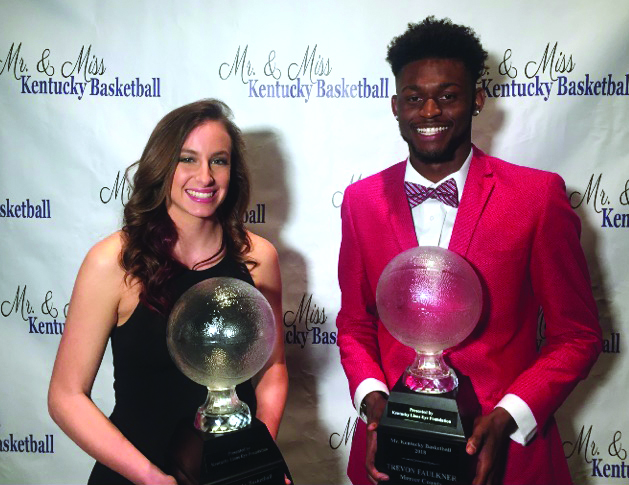 The Harrodsburg Herald/Arpan Dixit
In 2018, Seygan Robins and Trevon Faulkner became the first players from the same school to win Miss and Mr. Kentucky Basketball awards. Robin and Faulkner are returning for their fifth years of playing college basketball.

Mercer County basketball stars Trevon Faulkner and Seygan Robins are both returning for their fifth year of collegiate basketball. The 2018 Mr. and Miss Kentucky basketball chose to exercise their extra year of eligibility given to all NCAA college athletes due to the lost COVID-19 season.

Faulkner returns for his second senior year and final season for the Northern Kentucky University (NKU) Norse and Robins will enter her junior year at University of Tennessee Martin (UTMartin).

Two of the best athletes to ever wear the Titan red and blue are nearing the end of their college basketball careers. Faulkner set records at Mercer that might never be broken with his 3,032 career points and 1,100 rebounds. He is also the winningest player in Titan history with a career record of 136-51 with a region title, four district titles, first team all-state and 12th Region player of the year in 2018. Robins helped bring two back-to-back state championships to Mercer and scored over 2,500 points, 800 assists and 500 steals as a Titan. She was named MVP of the state Sweet Sixteen tournament twice and the 2018 Kentucky Gatorade of player of the year.

Coming out of high school, Faulkner had his choice to play collegiate football, but choose to play college basketball at NKU and has played 123 games for the Norse in the past four seasons. His points per game has increased every year as he has taken a bigger role on the team. In his senior season he averaged 11.8 points, 3.5 rebounds, 1.5 assists and one steal in 29 minutes a game.

In his time at NKU, he helped the team win two Horizon league championships and played in the NCAA tournament versus Texas Tech who went on to lose in the championship game in the 2018-2019 season. Some of Faulkner’s many accolades include two seasons on the Horizon League All-Tournament Team and he passed the 1,000 point milestone last season.

This year, he has a chance to put his name in the NKU record books with only needing to start five more games to capture the record. He is also ranked fourteenth in career points and fifteenth in career steals. Since his arrival to the program the Norse have gone 83-41 with hopes at making another run for the Horizon League championship and a bid to the big dance this season.

After hoisting back to back state championship trophies, Robins took her talents to the University of Louisville. The five star recruit appeared in 26 games as a freshman, but only played two games her sophomore year before redshirting due to an injury. The Cardinals won two ACC Championships, but Robins wanted a bigger role and more playing time, so she transferred to UTMartin in 2020. She also joined her former Mercer teammate Emma Davis who played four seasons for the Skyhawks. In her first season with UTMartin she played over 30 minutes a game and averaged 7.7 points,  2.1 rebounds, 3.3 assists and 1.4 steals. The team went 22-6 and were runner ups in the Ohio Valley Conference Championship.

Last season Robins played in 19 games as she battled through injuries. She still lit up the stat sheet with 187 points, 46 rebounds, 53 assists and 30 steals. Robins still has two years of edibility left after using both a COVID-19 and redshirt season, but is undecided if she will play after this season. She has also excelled in the classroom making the honor roll three times at UTM.

With only a few upperclassman on the team this upcoming season, Robins’ role and numbers could increase as she returns as the third leading scorer from last year’s squad.

Both Faulkner and Robins made their marks on the Mercer basketball program and have contributed on the collegiate level as they prepare to make one final run for their respected programs. Each now have the chance to make their marks on their college teams five years after being the first two players from the same high school to win Mr. and Miss Kentucky Basketball.