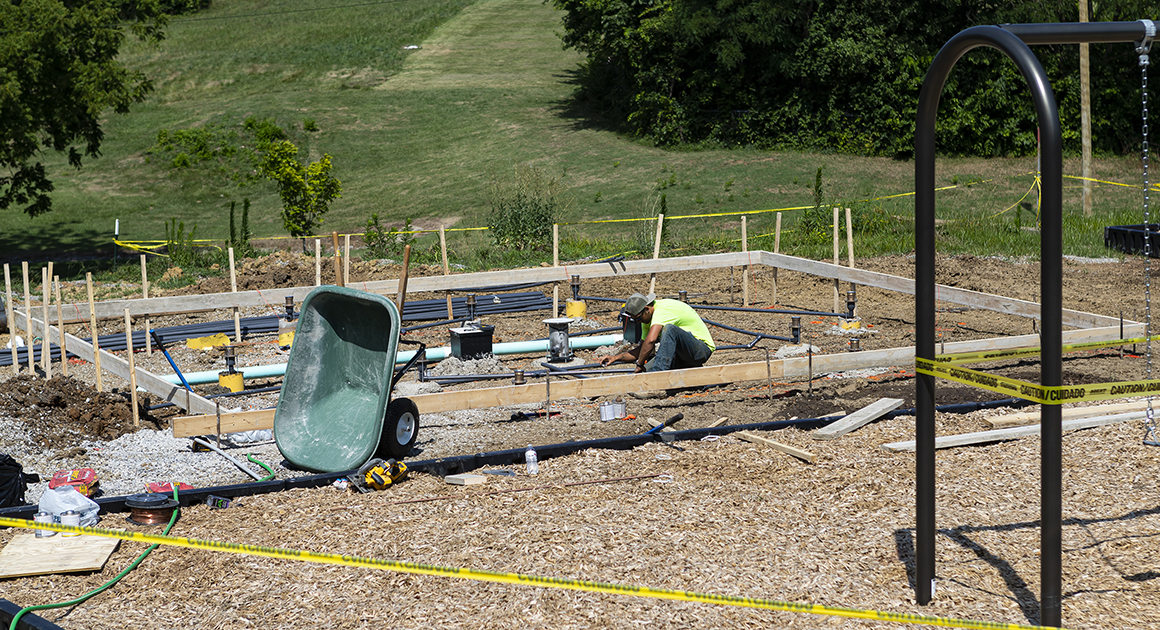 The Harrodsburg Herald/Robert Moore
Work has finally begun on the splash pad at Young’s Park but officials have been unable to provide a date when it will open.

Good news for locals looking to escape the heat. The state has finally approved the City of Harrodsburg’s plans to build a splash pad at Young’s Park on Linden Avenue, Commissioner Jennifer Kazimer announced at the Board of Commissioners’ regular meeting on Monday, July 11.

Back in December of last year, the city commission awarded the $147,205 bid to build a splash pad and playground at Young’s Park to DWA Recreation, with the  Harrodsburg-Mercer County Tourist Commission contributing $25,000.

It was hoped the splash pad would be ready by the beginning of summer, but construction was held up while the state evaluated the plans. With the state’s approval, the contractor started work Monday.

“Our intent is to have the splashpad infrastructure completed by the end of this month, if not sooner (weather-permitting),” said Mitchell Knigga, the project coordinator at  DWA Recreation.

Once the contract has finished that, the city will complete the concrete work.

“We will return thereafter to install the splash pad’s play features, and ultimately, to test the system and make it operational,” Knigga said.

He  said an opening date was not available for the splash pad. Kingga said the city would make that announcement.

Mercer County residents were caught off guard by the city’s decision to tear down the playground last August. City officials said they had received complaints about the playground equipment being in bad shape. After a safety inspection, it was recommended the city take down the equipment.

While work on the splash pad was held up, the park has received a face lift. The Harrodsburg 250th Celebration mural committee publicly unveiled the new mural this past Saturday.

The public works department has completed renovations at the park, but the eagerly anticipated splash pad-the first public splash pad in Mercer County-was held until the state finally granted its approval.

In related business, the commission approved a revised municipal order for the Young’s Park rental agreement.