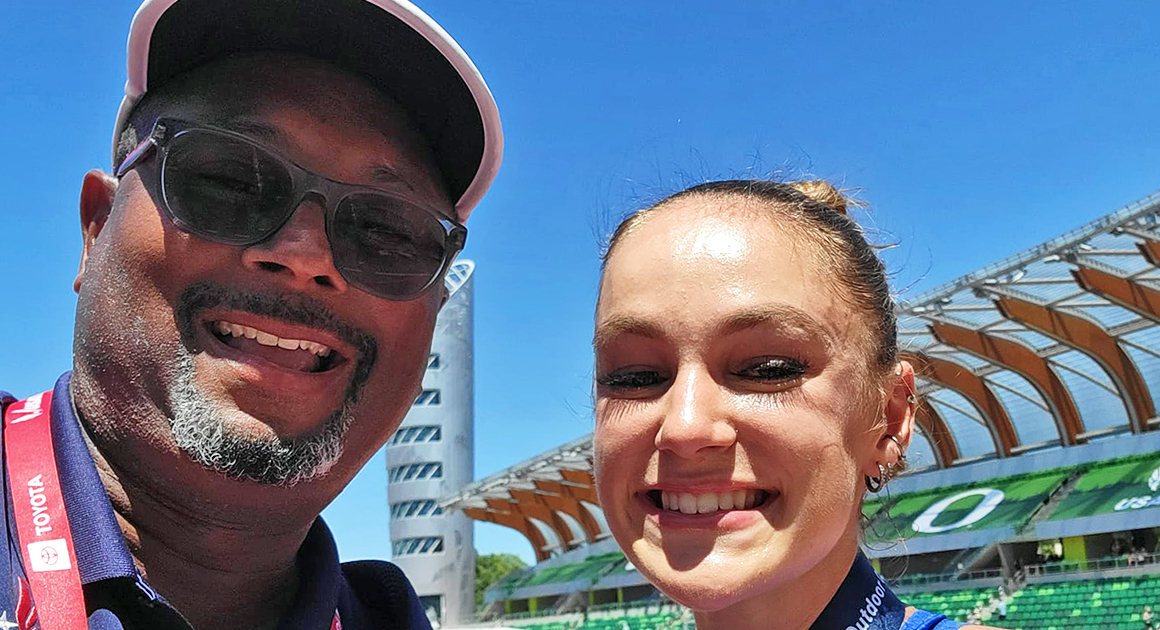 Photo Submitted
Mercer Track Coach Terry Yeast, who worked His the long and triple jump as an official at the USATF Outdoor Championship, posed for this selfie with Abby Steiner, who won the 200-meter run at the meet.

This was just the most recent track meet Yeast has worked to build a strong resume to be an official at the 2028 Olympics in Los Angles, California. Yeast applied to be an official last October and was one of around 100 master official chosen for the meet out of thousands of applicants.

He has been a USATF official since 2009 and has worked the last three Olympic trials along with college meets in Kentucky, the NCAA indoor national championship, high school nationals and various other high ranking meets. Yeast qualifies at the highest rank of official, which is master status and primarily works the horizontal jump events at national events. He started as an umpire, but transitioned to a horizontal judge after the 2016 Olympic trials when a lot of older officials retired. On occasion he will serve as clerk, umpire or work a high jump event if needed.

Yeast spent two weeks in Oregon first working the Nike Outdoor High School Nationals and was the pit chief in the long and triple jump events for the four day meet. His second weekend in Eugene, he worked the long and triple jump at the USATF Outdoor Championship as a horizontal jumps official. Yeast was one of 16 individuals chosen for the event from around the country to work the four day meet.

His particular job was either to watch board and make sure jumps were foul or fair through the use of a camera next to the runway or to rake the sand pits after jumps.

The winners of the USATF Outdoor Championship go on to compete in the 2022 World Athletics Championship in the middle of July. Yeast is currently an alternate official for the event which is held in the United States this year at the University of Oregon in Eugene.

His biggest takeaway from the experience was the great group of officials he worked with and just seeing the success of Kentucky athletes like Abby Steiner, J.P. Vaught, Cade Flatt and Sydney McLaughlin. Yeast was lucky enough to watch Steiner,  who is a star for the University of Kentucky track team, win the 200 meter dash. Steiner and Yeast met after the Titans won both track championships at the University of Kentucky Track and Field Facility. The two ran into each other again after Steiner earned her trip to the World Championship and got a quick selfie. Yeast also witnessed McLaughlin break her own world record in the women’s 400 meter hurdles with a time of 51.41.