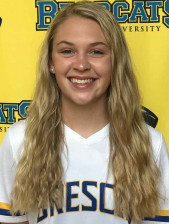 A 2019 Mercer County Senior High School graduate, Aubrey Jones is heading into her final senior for the Brescia University Bearcats women’s soccer team. Jones’ Titan career started early with her first goal scored in her seventh varsity game as a freshman in 2015. She played four seasons for the Titans and  never missed a game after her freshman season. Her sophomore year, under new Head Coach Joshua Culver, was one of her best with eight goals and three assists.

As a junior she helped Mercer get to the 12th Region championship with her four goals where they fell to the powerhouse that is West Jessamine. In her final season as a Titan, Jones and fellow senior Lyzzi Prigmore led the team with 10 goals a piece and were co-captains in the 10-8 season. All together she played in 70 games for the Lady Titans, scoring 25 goals with nine assists. 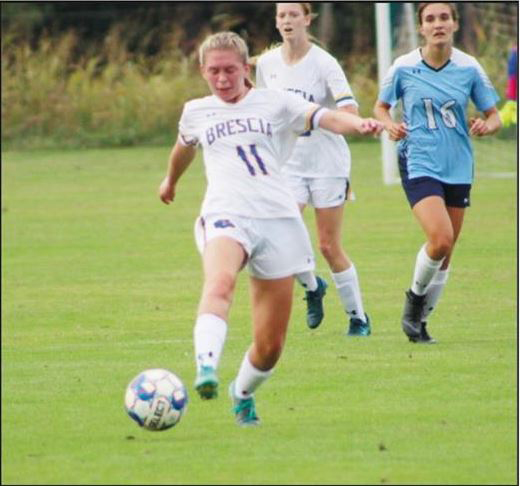 Photo Submitted
Former Mercer Titan Aubrey Jones is preparing for her senior year with the Brescia University Bearcats women’s soccer team, which includes a trip back home to play the CU Harrodsburg Pioneers on Sept. 2.

Her favorite memory from playing for the Titans was beating the Danville Admirals in a penalty kick shoot-out in the semifinals of the 2017 12th Region tournament. That win was the farthest the Titans girls soccer team had ever been in program history.

Coach Culver had nothing but good things to say about his former player.

“Aubrey Jones was a phenomenal student athlete for the Mercer County Senior High School girls soccer program. She brought so much energy, passion, dedication, work ethic, and leadership to the sport and program. Aubrey was a very unselfish player and highly coachable” he said. “She made others around her better. At practice, she was always looking to be the hardest worker and gave absolutely everything she had on the field during matches. I’m so happy I had the opportunity to coach such a passionate and humble individual. She definitely left her mark on our program and I’m very proud of all her accomplishments on and off the field.”

Jones’ time as a Titan was loaded with accolades including two time All-District tournament team,  two time All-Area first team, first team All 12th Region and she was on the girls track and field team who won state in 2019. With her hard work on the field and in the classroom Jones earned a scholarship to Brescia University.

Brescia is a small private Roman Catholic University in Owensboro with less than a thousand students. The Bearcats athletic program plays in the River States Conference.

“I chose Brescia because I wanted a small school in a relatively large town and when I visited the campus I fell in love with it and Owensboro,”  Jones said.