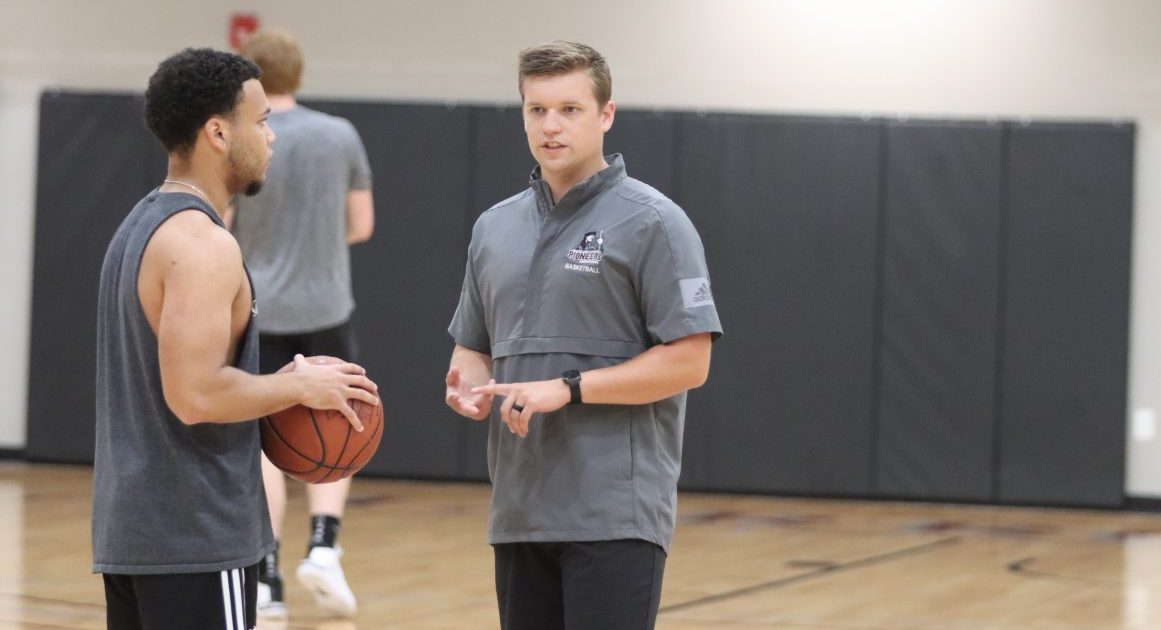 The Harrodsburg Herald/David Carpenter
CU Harrodsburg Coach Austin Sparrow, right, talks with junior Tevin Kavanaugh at the Pioneers summer workout. The team is in preparation for another championship run.

The definition of a dynasty is to pass down success and fortune along with an established core belief system from one generation to the next. The Campbellsville University Harrodsburg men’s basketball team is currently  doing just that. Coming off their 2022 NCCAA National Championship, Head Coach Austin Sparrow has already nailed recruitment. No titles are won in the offseason, but the foundation can be laid for it.

Sparrow has prepared for losing his star seniors with the departure of Antoine Darby and Mason Blair. Darby was named  MVP of the NCCAA Tournament and both Blair and Darby were named to the all tournament team. Both were crucial for the title run and brought a lot to the offensive side of the ball.

With the program in its fifth year and Sparrow heading into his fourth year in charge, the Pioneers might have their best recruitment class yet. The CU Harrodsburg staff have already signed 11 freshmen and two transfers from Asbury University and Georgetown College.

The class is headlined by one of the states top players in Colby Fugate from Paintsville High School in Johnson County. Fugate is a 6-foot, 5-inch shooting guard who is known for scoring, with over 2,000 career points in high school.

Coach Sparrow went out of the state to ink his recruit of the 2022 class with Makell Gibson from South Gibson High School in Tennessee. The 6-foot, 4-inch guard will add depth to the Pioneer backcourt.

CU Harrodsburg added size with Asbury University transfer Warner Bryan. Coming in at 6-foot, 7-inch, he will serve a key role in rebounding, defense and brings experience to the team.  Bryan was a top recruit for Sparrow in 2020 coming out of LaRue County where he averaged a double-double.

Another transfer addition from Georgetown College, DeAjan Stepp, can contribute right away. The 6-foot, 4-inch guard is a former 12th Region player of the year runner-up who brings athleticism to the roster.

The Pioneers added shooting with Braden Smith out of Thomas Nelson High School. Smith finished his high school career as the all time leading scorer and made the All-Region team twice. As the states leading three-point shooter with a 56 percent shooting percentage, Smith can help the Pioneers capture back-to-back titles.

Coach Sparrow added point guard depth with the signing of Naz Welch out of Cordia High School. Welch scored over 1,000 points and had 500 rebounds in his career at Cordia while shooting 57 percent from the field.

Belfry star Tykee Peterson is another huge signing for the Pioneers, coming off a season where he averaged 19 points, seven rebounds and five assists. Peterson was named a Kentucky Prep All-Star in his senior season and spent time playing with Fugate in summer ball.

Sparrow kept his hot streak with another Louisville recruit in Keyonie Rutledge from Shawnee High School. Sparrow boasted about his defense saying, “Rutledge plays very hard and has the ability to guard multiple positions.”