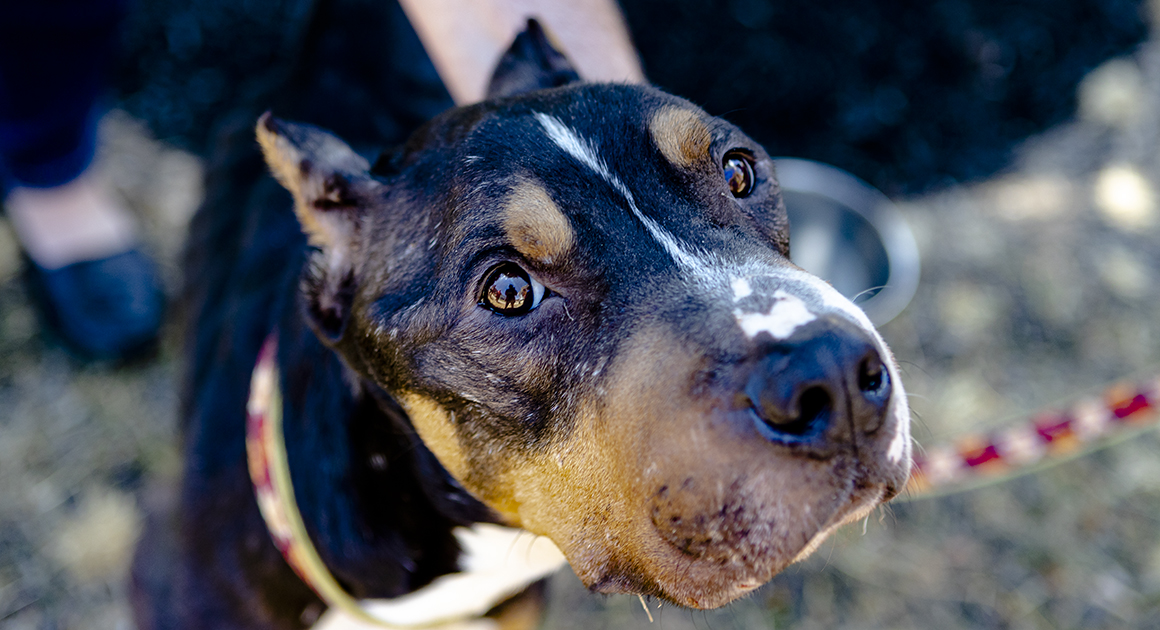 The Harrodsburg Herald/Robert Moore
Titan, one of two dogs authorities say were left in a cage without food or water for four month, was brought to the Mercer County Judicial Center Monday to bring attention to the case and to Kentucky’s lax animal cruelty laws.

The owners of the two dogs authorities say were abandoned without food or water for four months were arraigned in Mercer District Court Monday.

Deputies from the Mercer County Sheriff’s Office discovered the dogs several weeks ago. According to the sheriff’s office, the couple who formerly lived in Mercer County moved to Liberty about four months ago, leaving behind their dogs. By the time the sheriff’s office received complaints about the malnourished dogs, one had broken free of the cage in which the dogs had been confined running loose. Both were taken to Commonwealth Animal Hospital in Harrodsburg for treatment. The two dogs are named Rocket and Titan. Titan, the healthiest of the two dogs, was brought to the courthouse by the Harrodsburg-Mercer County Humane Society.

Titan can’t talk, but his body bears mute witness to the abuse he’s suffered. Even after weeks of careful feeding, Titan’s still painfully thin and weak. Along his gaunt body, scars and sores are still clearly visible. While authorities say the dog may have been trained to be a fighting dog, Aubrey said the scars may have come from Titan’s attempts to free himself.

The other dog, Rocket, did manage to get free. Aubrey said Rocket recently underwent surgery to have the rocks removed from its stomach. Rocket had also tried eating tree bark for nourishment.

The Cains are being charged with 2nd degree cruelty to animals which is a class A misdemeanor. Each count is punishable by up to 12 months in jail. Aubrey and the other members of the Humane Society would like to see the Cains charged with torture of dog or cat. Like 2nd degree cruelty to animals, the charge is a class A misdemeanor for the first offense, but it becomes a class D felony for each subsequent offense if the dog suffers physical injury as a result of the torture and if the dog suffers serious physical injury or death as a result of the torture. Aubrey said the Cains owned other animals, but took them with them when they relocated to Liberty.

“Withholding food and water for four months, does that not constitute torture?” Aubrey asked outside the Mercer County Judicial Center Monday.

Aubrey says cases like this one—as well as the case of Jimmy Troy Howard, who is charged with shooting his neighbor’s dog with a pellet gun while it chained to the front porch back in January, and Maria Borell, who recently pleaded not guilty to 43 charges of 2nd degree cruelty to animals dating back to 2016—illustrate the need for state lawmakers to do more to toughen up Kentucky’s notoriously lax animal cruelty laws.

On Monday, the Cains pleaded not guilty and told the judge they could not afford an attorney. They court may appoint a public defender to represent them. They are scheduled to return for a pretrial conference on Thursday, Aug. 11, at 1:30 p.m.

You can send a check to the Commonwealth Animal Hospital at 1058 North College Street, Harrodsburg, Kentucky, 40330 with the attention to “Titan Or Rocket, Mercer Humane Society” or donate over the phone by calling 859-734-2245.