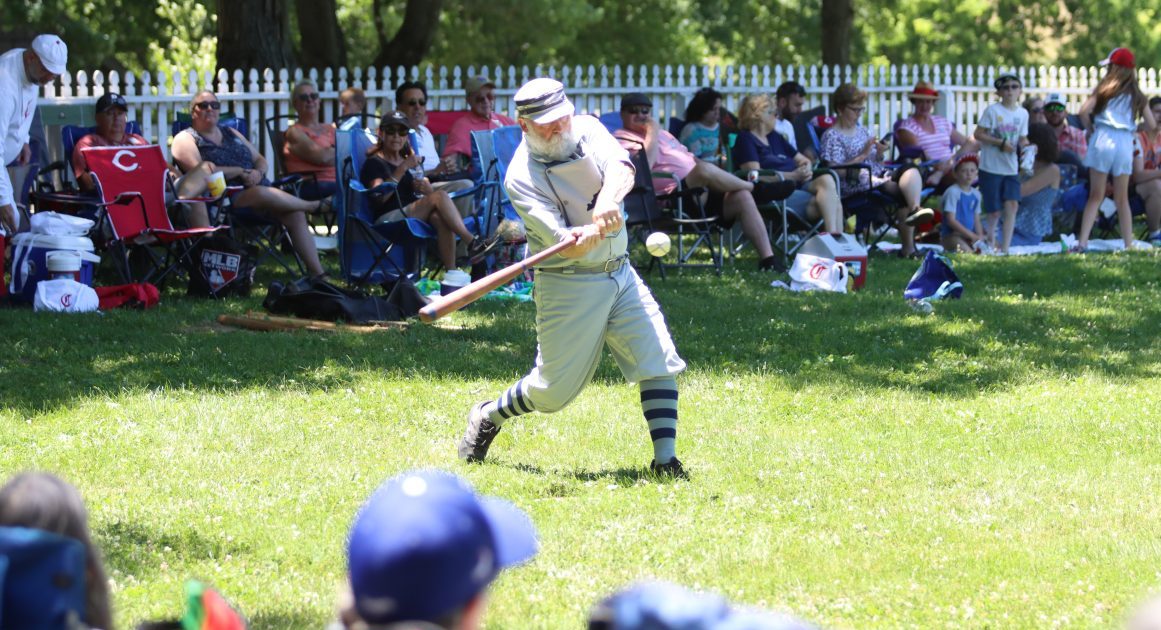 Vintage Baseball returned to Harrodsburg with the Bluegrass Barons playing the Cincinnati Red Stockings for the fourth year in a row as part of Shaker Village’s “Vintage Dad’s Day” Saturday, June 18.

The game was as advertised with vintage equipment or lack of with the teams wearing period reproduction uniforms and not using gloves to catch the ball. Vintage baseball is played based off the original 1860s rules and celebrates the first professional team, the Cincinnati Reds,  which was established in 1869. The Bluegrass Barons are in their seventh season and are based out of Central Kentucky while the Cincinnati Red Stockings are sponsored by the Cincinnati Reds Hall of Fame.

The game was full of action and was unpredictable with only underhanded pitching allowed according to the vintage rules. It made hits often and easy as the teams combined to score 42 runs. As for unpredictable the shed and two trees in the middle of the field made for some interesting fielding challenges for both teams. The few hundred people in the crowd even got some extra action when a foul ball went through a window of one the historic buildings in foul territory.  Spectators were right in the action crowding the first and third baselines and enjoying the shade trees in the distant outfield.

The Barons and Red Stockings were evenly matched in the first two innings with the Barons leading by one, 3-2. In the third inning, the Barons put on a show with 13 runs scored to the Reds two and they never looked back with another 11 runs in the fifth and closed out the seven inning game with a final score of 36-6. Both teams stuck around after the game to take pictures and talk to the fans about the original way of playing baseball with barehanded catches and deep hits to the outfield.