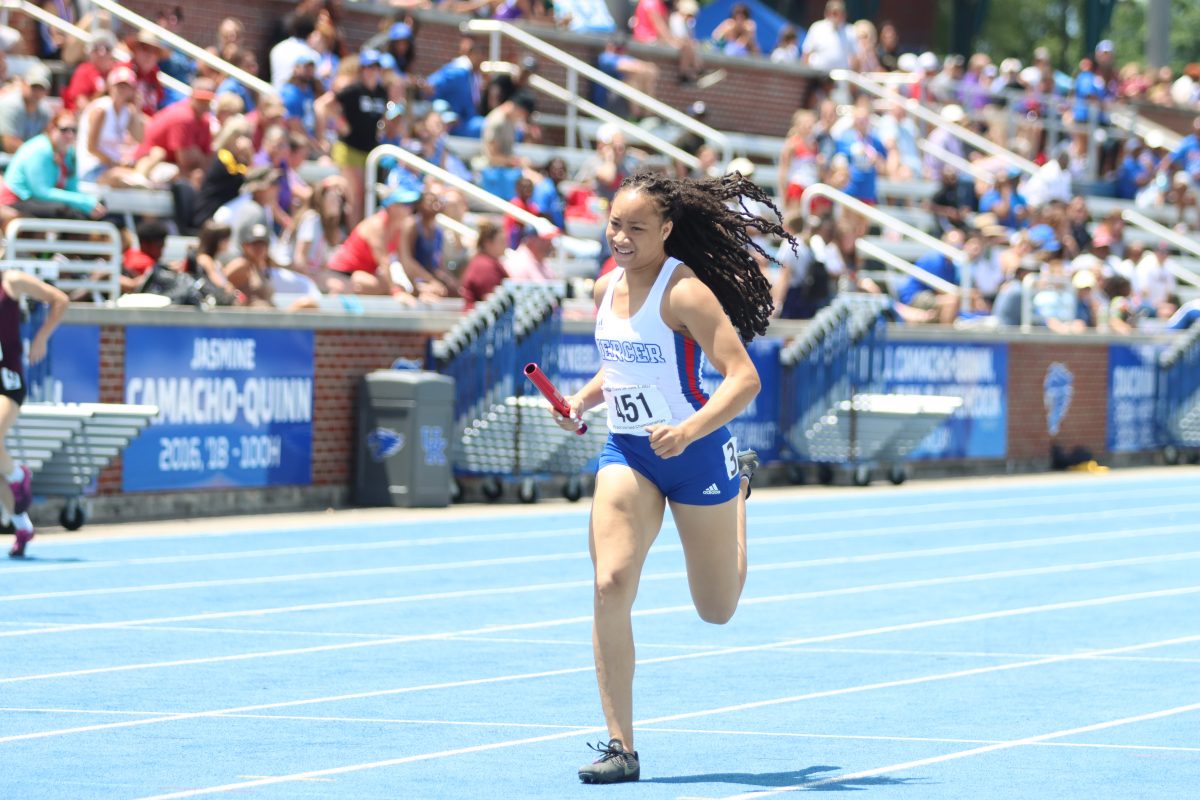 The Harrodsburg Herald/Wesley Bird
Junior Jai Marie Piazza finished the first leg of the girls 4×400 meter relay. The team of Piazza, Teigh Yeast, Katie Lewis and Timberlynn Yeast had a first place finish with a time of 4:00.

The Mercer County Titans  girls track and field team ran away with KHSAA Class 2A State Championship Friday, June 3, 2022. The girls’ totaled 81.5 points finished well above the second place score of 56 points by Mason County and third place was tie between Bourbon County and Christian Academy of Louisville  who each scored 44 points. This is Mercer’s second girls state title with a 2019 State Championship already in the trophy case

Coming in, the Titans were 17 point underdogs, but Mercer County Titans Head Coach Terry Yeast believed in his team.

“I showed them individually what we needed to make it work,” said Yeast.  “I told them that 75 points was the magic number and they scored 81.”

The girls scored in 13 events including four first place finishes. The Titans team got the win behind some superstar individual efforts. Seven girls from Mercer participated in the track meet with juniors Timberlynn Yeast and Jai Maria Piazza combining for 50 points in individual events.

Timberlynn Yeast dominated the day with wins in the 200 and 400 meter dashes and barely lost the 100 meter dash by four thousandths of a second. Her time of 24:45 in the 200 meter dash broke a 26 year-old record in the event to give her the new Class 2A state record.

Eighth graders and younger sisters, Teigh Yeast and Ralasia Piazza were pivotal in the win as well. Teigh Yeast scored eight points with two fifth place finishes in the 400 meter dash and triple jump. R. Piazza tied for sixth place with a jump of 4-10 in the high jump to secure 2.5 points for the Titans.

Clayra Darnell ran the 1600 and 3200 meter runs and finished eighth in the one mile to add a point to the Titans total. Junior Lindsay Jessie was the only girl thrower for Mercer and finished with 10 points. She nearly won shot put with her throw of 105-02, only behind Shelby County’s  Nevaeh Achlin who won the event with a throw of  105-05. Jessie also placed seventh in the discus event with a throw of 31-02.75 to end her day with 10 points.

The girls final event of the day was the 4×400 and the was the only team event Mercer participated in. The Titans hold the Class 2A state record in the event with a time of 3:56 set in 2019. The dream team of Jai Maria Piazza, Teigh Yeast, Katie Lewis and Timberlynn Yeast were tasked with running the race and were trailing going into the final leg. Timberlynn Yeast closed and gap and more passing Bourbon County in the second curve to win the race handily with a time of 4:00.

Even with girls track team with less numbers than the other top finishing schools it didn’t matter. Mercer won by over 25 points powered by great athletes across the board.

At times Coach Yeast worried about the depth of his girls team.

“The girls team was very small and we were concerned if we had enough depth to win. However, they absolutely dominated at the right time.”

The Titans will look to continue their domination next year returning 100 percent of their roster with not a single girl senior on the team this year. In 2023, this group will no doubt be the team to beat.

This might be Head Coach Terry Yeast and his staff’s greatest state championship yet to win the title with only seven girls competing.