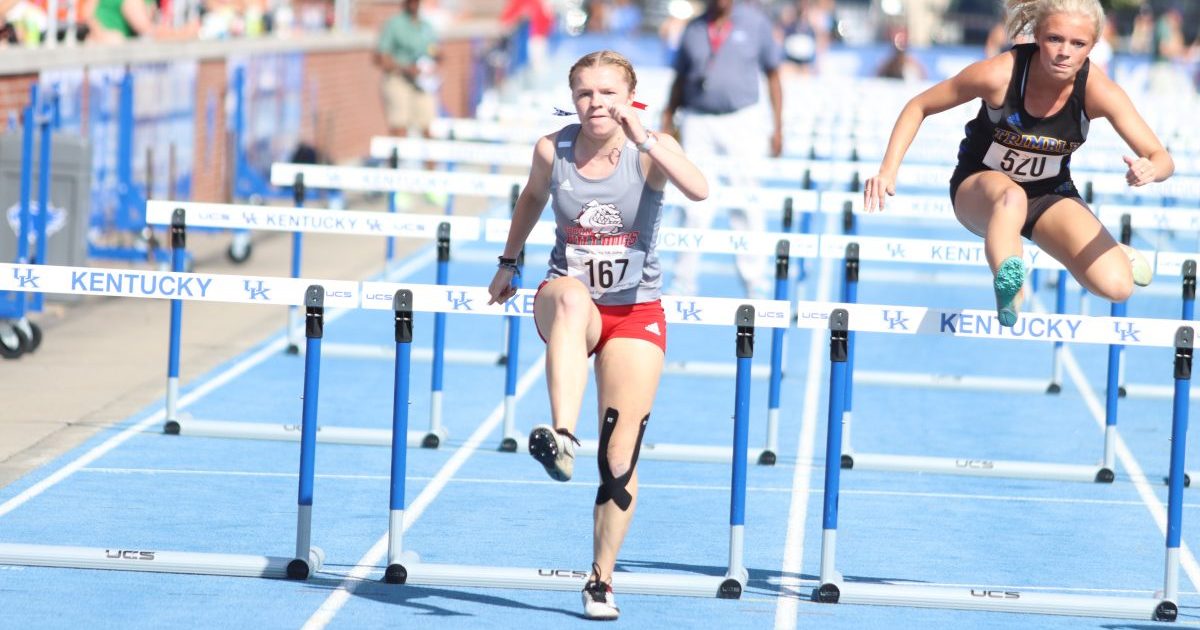 The Harrodsburg Herald/Wesley Bird
Senior Rebecca Biggs earned an 18:12 in the 100 meter hurdles to place 18th for Burgin at the KHSAA State Championship on Thursday, June 2.

R. Taylor and Hatfield both had stand out performances at the KTCCCA Middle School State Championship Saturday, May 28. All middle schools in Kentucky compete at one meet with no classifications based on school size. R. Taylor competed in both hurdle events and placed top five in the 100 meter hurdles with a time of 17:41. She followed it up with a tenth place finish in the 300 meter hurdles with a time of 53:51. Hatfield barely missed the podium tying for a fourth place in high jump with a final jump of 4-08.  In triple jump she finished thirteenth with a distance of 29-7.5. Burgin’s tandem of young talented jumpers are only getting started in their track careers, but were among the best of all middle schoolers in the state in their respected events.

J. Taylor won the triple jump event at the Class 1A Region 5 by a  considerable margin with his jump of 40-5.25. At state he competed in the second heat and his first jump was 37-10.75 followed by a 38-0.5. His final jump netted him thirteenth place with a distance of 38-1.25. Jacob Rogers of Pikeville won the event with a jump of 41-10 followed by Grayson Turner of Somerset with a distance of 40-8.50 and in third place was Allston Leggette from Fort Knox with a jump of 40-4.

Hatfield qualified to state after finishing in second place at regions with a jump of 4-8. She was the second youngest of the competitors as an eighth grader. Hatfield passed the 4-06 line on her second attempt to move on to 4-08. She cleared 4-08 on her final attempt, but couldn’t surpass 4-10 to finish in fourteenth place. Maddie Neary of Lloyd Memorial won the event being the only girl to jump 5-00.