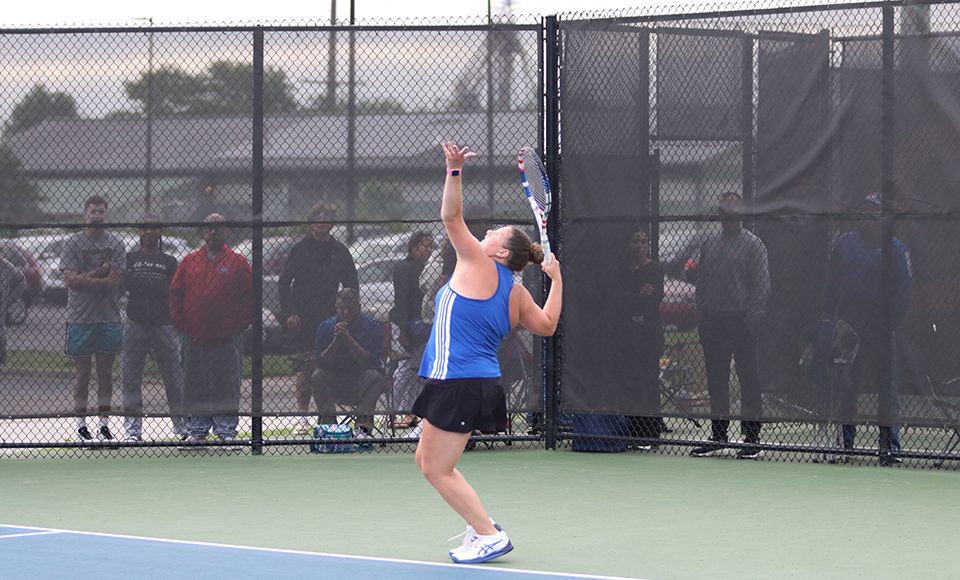 The Harrodsburg Herald/Wesley Bird
Mercer sophomore Sara Dunn fought back after being down 0-3 to win her first match at the girls singles KHSAA state championship Tuesday, May 31.

The Mercer Titans tennis team is returning to state with sophomore Sara Dunn finishing second in the 12th Region singles tournament Tuesday, May 24. The last Titan tennis player to make it to state was Rebekah Trent in 2019.
State Championship
Dunn’s first match in the round of 64 of the single KHSAA state tournament was an 8 a.m. match against fourth seeded Honor Valentine from Highlands.
In the first set Dunn handled business never trailing on her way to a 6-4 win. She fell behind in the second set 0-3. Dunn battled back to even the match at 5-5. She brought it home with two straight points for a 7-5 win and moved on to the round of 32. Dunn’s season came to end in the second round losing to Greer Webb  from Sayre High School 2-6, 3-6.
Region Championship

Dunn finished up the regular season with a record of  12-1 with the only loss coming from SuSu Prince from East Jessamine. She received a first round bye in the 12th Region tournament. Dunn won the first two games handily against McCreary and Garrard County.

In the semifinals she faced Malory Watkins from Garrard County and the game went well over two hours with a lot of long back and forth rallies. Dunn got the win in two sets winning 7-5 in both of them. She cemented her trip to state with a top four finish in region, but a win would have given her a better seeding.

Dunn found herself playing Prince in the Championship in less than hour after her semifinal match. She started strong winning the first set 6-3, but faded in the second set. Prince took the second set 6-2 sending the match to a super tiebreaker. Prince got up early in points, but Dunn had a late push before falling 6-10.