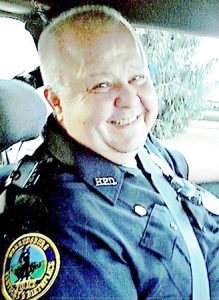 Granville Maurice “Butch” Peyton Jr., 64, of Harrodsburg, husband of Laura Devine Peyton, died Sunday, May 29, 2022, at Harrodsburg Health Care Center. Born Nov. 6, 1957, in Lexington, he was the son of the late Granville Maurice and Louise (Stratton) Peyton Sr. He was a 1976 graduate of Lafayette High School in Lexington, received a degree in police studies at Eastern Kentucky University Police Academy, was a Fayette County Sheriff Road Deputy from 1989 until 1999, retired from the Harrodsburg Police Department in 2014 and then completed his career as a Boyle County Deputy Sheriff. He enjoyed old cars, watching baseball, playing the guitar, going to flea markets and was a member of the Baptist faith. Survivors, in addition to his wife include: two daughters, Sara Peyton of Harrodsburg and Amber Ball of Danville; one son, Granville M. Peyton III of Danville; one brother, James (Pamela) Peyton of Georgetown and three grandchildren, Landon and Emily Smith both of Harrodsburg and Peyton Ball of Texas. He was preceded in death by one brother, Gary Lynn Peyton and one sister, Martella Anderson. Funeral services will be held Friday, June 3, at 11 a.m., at Sims Funeral Services with Terry Cornish officiating. Burial will be in Bethel Baptist Church Cemetery. Pallbearers will be Jay Eldridge, Jake Thomas, Brian Allen, Darrick Peyton, Landon Smith and Dustin Devine. Visitation Friday, June 3, from 9 a.m. until the hour of services at Sims Funeral Services with the Harrodsburg Police Department officers serving as honor guards. Expressions of sympathy may be sent to the family at www.simsfuneralservices.com. Paid Obit.