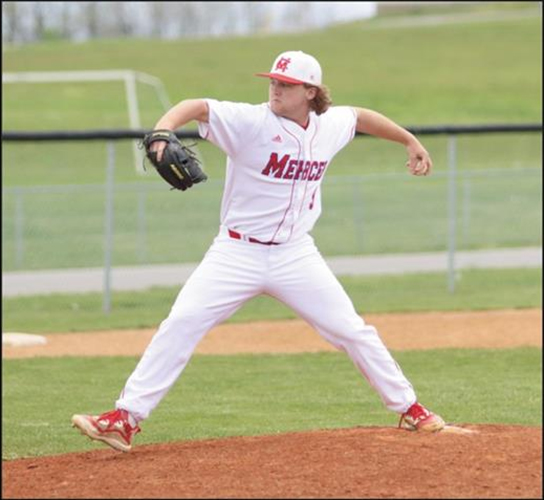 The Harrodsburg Herald/Wesley Bird
Isaac Beasley is one of six seniors the Titans will miss next year. Beasley was one of six Mercer players to be named to the 46th All District Team.

The Mercer County Titans baseball team had a good 2022 season, racking up 26 wins, 10 losses and winning the 46th District Championship. A district title and 26 wins is a good season, but this team was built to compete at state.

The 12th Region had three of best teams in the state with Boyle, Danville and Mercer. Danville got the best of Mercer twice and kicked the Titans out of the 12th Region tournament in the first round, winning 6-1. The Admirals went on to beat West Jessamine in the championship to advance to state.

Mercer’s team was senior led with 10 on the team and two returning for their COVID-19 season. Juniors Evan Hart and Jonathon Logdon rounded out the talented roster that went on an 11 game win  streak in the middle of the season.

Cayden Devine was awarded the 46th District Player of the Year. Devine had 41 runs, 31 hits, 18 RBIs,  27 stolen bases, two home runs and a batting average of .290. He also pitched 10 games allowing 43 hits, 18 runs and striking out 42 batters to finish with an ERA of 1.69. Devine wasn’t the only award winning player with six Titans selected to the All District team: Isaac Beasley, Sam Baughman, Logdon, Aaron Caton, Devine and Hart. Caleb Purdom, Baughman and Caton were also part of the 46th District All Tournament team.