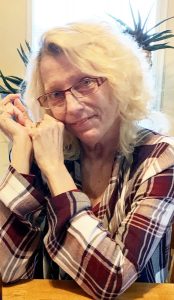 Mechelle Renee’ Jackson, age 56, of Harrodsburg, died Tuesday, May 24, 2022, at her home in Harrodsburg. Born March 12, 1966, in Danville, she was the daughter of the late Walter Delano and Patricia Lynn (Settles) Jackson. She was a graduate of Mercer County High School, a salesclerk for Canoe Creek Apparel in Danville, and was a member of the Pioneer Baptist Church.  Survivors include: one sister, Lesa Beth (Dan Marcum) Jackson of Harrodsburg; two half-brothers, Wayne Jackson of Harrodsburg and Danny Jackson of Lancaster and several nieces and nephews.