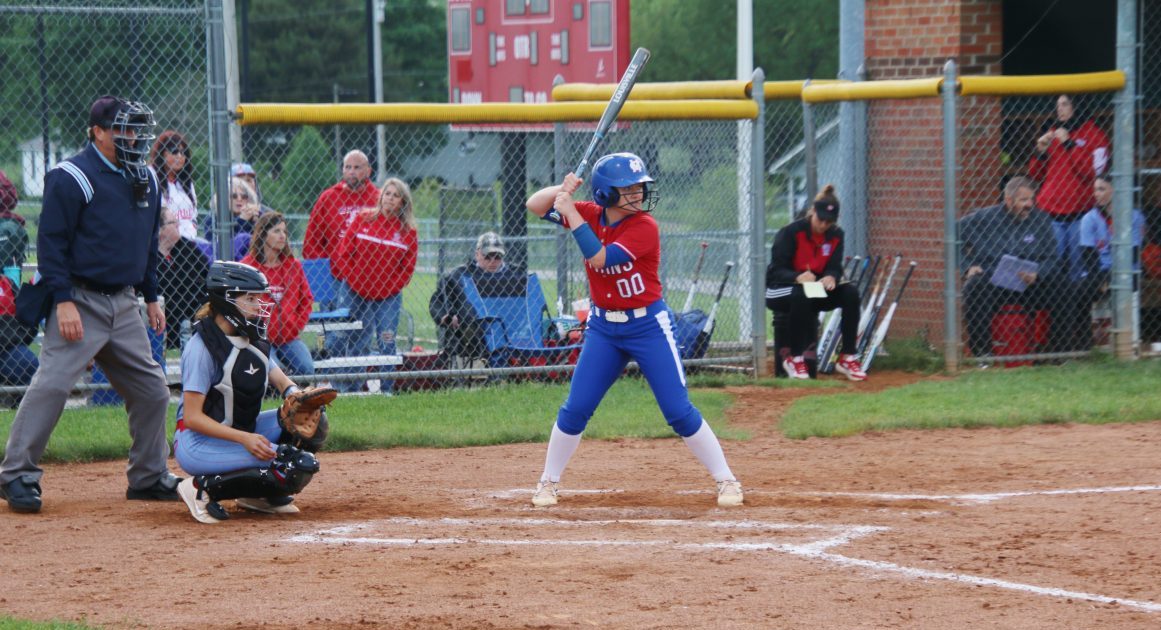 In the second half of the season, the Titans struggled to connect bat to ball and even though they hit better in the district game, ultimately it did them in Monday night when they left runners on base and they couldn’t produce at the plate.

Senior Elle Prewitt started off batting for the Titans, but was out with a hard hit when the left fielder hustled in for the catch. Junior Kallise Gammon got the second out with a high pop to the pitcher. Peyton Boyd ended the inning swinging with her third strike.

Eighth grader Ella Davis made her varsity debut in the circle. The Titans have been without pitcher Ashley Howard after having surgery to repair a previous injury. Prewitt has also pitched this season, but her glove was needed on first base. Davis earned the first out with a hit back to her, she then connected to Prewitt at first base. West’s second batter was walked. With a full count, Davis put one in the dirt but catcher Hayley Ransdell recovered quickly and kept the runner from stealing. West’s Aaliyah Edenstrom nailed a line drive to center and Gammon hummed it in to keep West to only one run in, 1-0. Gammon had a dramatic snag at the fence, but West was able to tag up and get one in, 2-0. With a count of three balls, Davis hung in there and earned two strikes, but West’s Emily Woolums hit a grounder by the short stop and West scored one more. Emily Worthington scooped up a grounder to Prewitt for the third out. The Titans trailed 3-0 at the end of the first inning.

Makayla Burns was hit by the pitch and took first base. Hannah Beasley fouled one down third and followed with a swinging strikeout. Presley Bradshaw battled at the plate with three foul tips before grounding one down the middle to get on first. Haylee Ransdell drilled a shot that went foul in right field, but was unable to make contact again and struck out for the second out. Madisynn Griffin went down swinging and the Titans left two runners on base trailing West, 3-0.

Boyd scooped up a grounder and Prewitt stretched it out at first base for the first out. West’s Michaela Tate found the hole over the short stops head and advanced to first. Boyd had a line drive bounce off the top of her glove, but she hung with it to get the runner out at second for the second out. Hannah Beasley fumbled a shallow hit to third and West put a runner on. Ransdell did a good job keeping the runners on base as Davis found her rhythm. An error at left field put another runner on base and allowed another run, 4-0. Edenstrom bounced a hard hit in the dirt to Boyd who found Worthington at second for the third out of the second inning.

In the top of the third, Worthington started with a pop out. Prewitt had a hard ground single and Gammon was walked to put two runners on base. Boyd battled through five foul balls and a full count to pop out to third for the second out. The Titans continued to battle at the plate. Makayla Burns fought through the foul hits, but was out at first when trying to advance on a dropped third strike.

A costly error from the Titans allowed West three runs during the bottom of the third. Bradshaw caught a long hit at right for the first out. Beasley scooped up a grounder at third and connected with Prewitt for the second out. West’s Tori Giurgevich sliced one past Worthington for a single. West found the hole again over the short stop’s head to get the runner on. West sent a bullet past Davis and another run came in, 5-0. A pitch in the dirt went past Ransdell at the plate and West put another one on the board, 6-0. Mercer struggled with the next hitter with two errors and West brought in another runner, 7-0. The Titans finally got out of the inning when Worthington found Prewitt at first for the third out.

Mercer continued to make contact on foul balls, but struggled to get on base. Beasley hit a hard grounder to left center to earn a single. Bradshaw struck out after three foul tips, but Beasley was able to advance to second. Ransdell knocked out a few foul tips, but ended up striking out swinging for the second out. Beasley advanced to third. Griffin sent one foul and the next pitch was wild and Beasley came in to put the Titans on the board, 7-1.

For the rest of the story including full results, check out this week’s issue of the Harrodsburg Herald. Click here to subscribe.