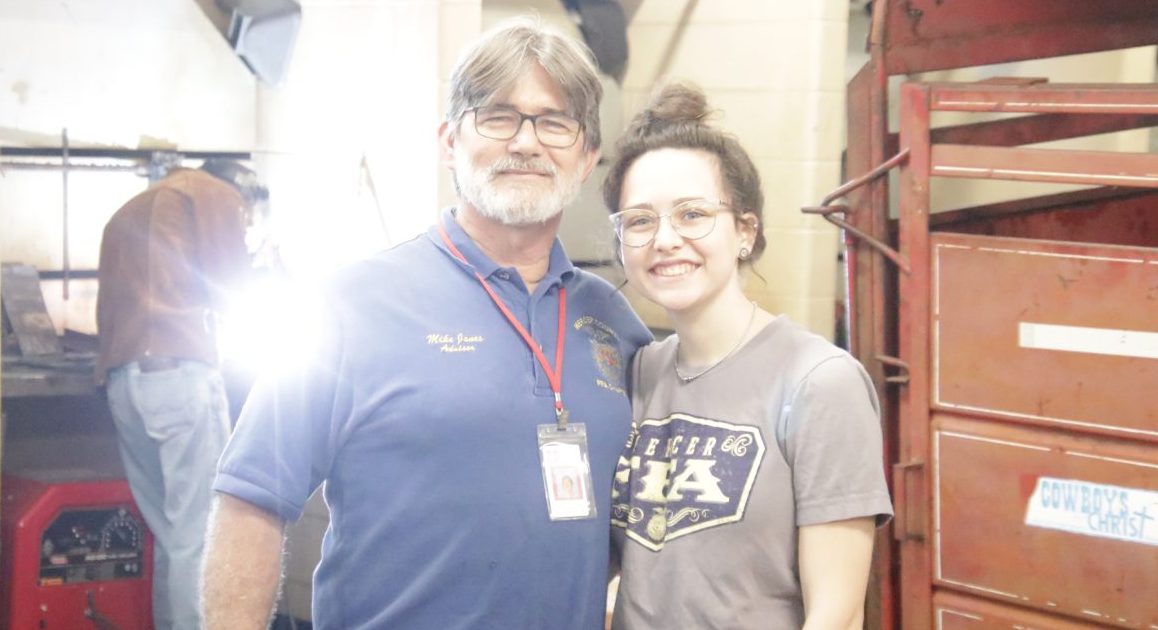 The Harrodsburg Herald/Wesley Bird
Ag teacher Mike Jones, pictured here with his daughter Alexis Jones in shop class, is retiring from Mercer County Senior High School. Jones has taught at the school since 1991.

After 30 years of helping prepare Mercer County youths for life in agriculture, Mercer County Senior High teacher Mike Jones is stepping out of the classroom and back to his own farm for retirement.

Originally from Oldham County, Jones had his first exposure to Mercer County at Western Kentucky University when four of the students on his floor were Harrodsburg High School graduates, including his co-worker, Athletic Director Donald Smith.

Jones began his career teaching one year at Shelby County and two years at Harlan, before now retired agriculture teacher Dan Stoltzfus convinced him and his wife, Debbie, to give Mercer County a try.

“I love agriculture and the kids are such a big part of why we do what we do as teachers,” said Jones.

Since 1991, when his time at Mercer began, Jones has seen a lot of changes in agriculture.

“When I first started, so many of the kids were involved in the farming side. You would have kids missing the beginning of school because they had to help their family get their tobacco crop out,” he said. “Now, fewer kids are involved in active production. The technology inside the classroom is something Jones has enjoyed seeing progress.

“If you had told me at the beginning of my career that I would have had a smart board I would have never believed it,” he joked. “I started with slides and a projector and its been a 100 percent change to being in a fully interactive classroom where we can offer the students so much more and take them so many different places with the help of virtual technology.”

“Now we have plasma cutters and new equipment and it’s helped me give a better experience to my students.”

Along with teaching small engine repair, animal science, equipment operation and maintenance and several other agriculture related subjects, he was also one of the Future Farmers of America (FFA) advisors.

“Mr. Jones was more than just a teacher to me, he was a mentor and a neighbor,” said MCSH graduate Emily Hamilton. “He is one of the most motivational and enthusiastic people both in and out of the classroom. He fanned the flame of my passion for agriculture, FF, and public speaking. I will never forget all of the early mornings of parliamentary procedure practice in his classroom. My participation in parliamentary procedure at a young age helped me become a more clear and concise communicator. Those skills have proven to be critical in my professional career so far with Alltech, Inc. I will never be able to thank Mr. Jones enough for his many years of teaching and the influence he has had on my life.”

The skills he develops in his students for livestock judging, small  engine competitions, land judging and other competitions have helped them build a foundation for their professional careers in years to come.

“Mike showed us there was more to agricultural than riding tractors and cutting tobacco,” said former student Matthew Tyler. “For small town boys who sometimes can only see the world that’s right in front of them it was imperative that we have access to the bigger picture. I’m confident he’s the reason we all chose to go to the University of Kentucky and study agriculture.”

Jones’ love for FFA in high school inspired him to become an agriculture teacher, and in turn he inspired his oldest son, Ashton, and former student, Chase Cocanugher, to also become ag teachers. Ashton Jones teaches at Boyle County and Cocanougher will take over for him in the fall at Mercer.