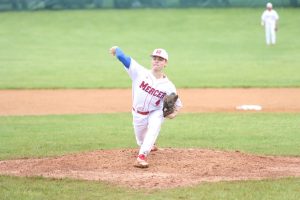 The Harrodsburg Herald/Wesley Bird Senior Aaron Caton made his debut as a high school pitcher during their 4-2 senior night win over the Western Hill Wolverines. Caton is normally behind the plate as the Titans catcher, but since recovering from an injury, he helped his team from the mound.

The Mercer County Titans baseball team defeated the Western Hills Wolverines 4-2 on senior night Saturday, May 7. The Titans celebrated a large senior class of 10 athletes with each taking a place on their field in the first inning and Chris Caton serving as honorary Head Coach for his boys.

Senior Aaron Caton started on the mound for Mercer to pitch for the first time in his high school career. Caton earned two strikes on the lead off batter, but couldn’t get the out. He did get the next out by fielding a ground ball and throwing out the runner to Logan Martin at first base. Isaac Beasley replaced Caton on the mound for the remainder of the first inning and gave up one run followed by back-to-back outs, 0-1. Jackson and Riley Peavler were first up to bat for Mercer and neither could make it to first. Cayden Devine was walked, but was picked off at third base to end the first inning.

The top of the second inning went quick with Beasley striking out two and Heath Shewmaker catching a pop fly at third base. Kanye Hobbs and Sam Gagnon were the only Titans to make it to base in the bottom of the second, but were unable to score.