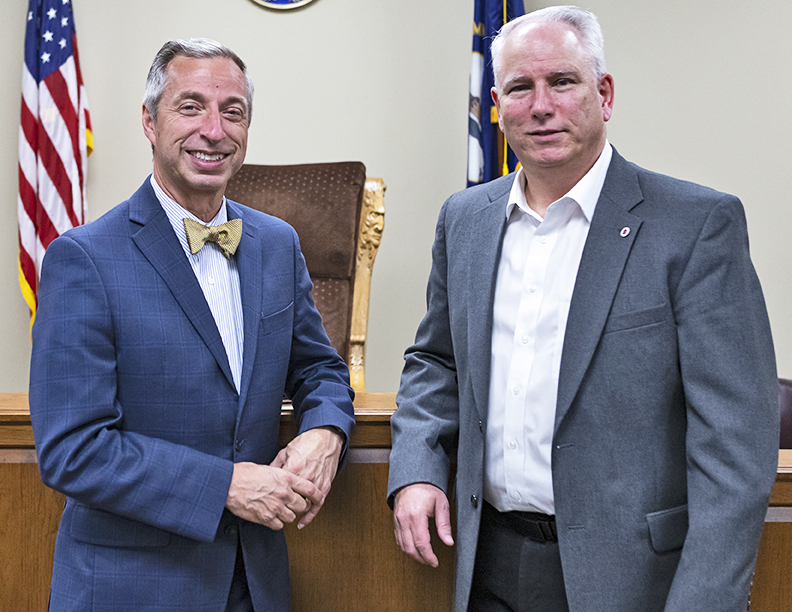 The Harrodsburg Herald/Robert Moore
Joseph Hopkins, who was named the new president of CU-Harrodsburg in February, talks with Mercer Judge-Executive Scott Moseley.

The Mercer County Fiscal Court gave first reading to the budget for the upcoming fiscal year.

The budget will be submitted to the Kentucky Department of Local Government for approval. A public hearing will be held before the budget is given a second reading, said Judge-Executive Scott Moseley.

Sheriff Ernie Kelty said he hopes the new budget will include funding to recruit and retain new deputies.

On Tuesday, Sheriff Kelty introduced his office’s two newest hires: Dep. Drew Raisor, who recently graduated the Kentucky Department of Criminal Justice Training, and Dep. Bobby Hardman, who was formerly a patrolman with the Harrodsburg Police Department. Kelty also announced that, even with the newest deputies, they were still down two positions. The sheriff said Dep. David Prather is leaving to join the Boyle Counth Sheriff’s Office while Capt. Scott Elder had previously left to lead the Burgin Police Department.

Kelty said they are in talks to replace Prather and Elder. The sheriff said he hopes to revise the pay structure to retain deputies.

Before their regular meeting, the fiscal court held a public hearing for county road aid and local government economic assistance funds. No one spoke. After the hearing, the magistrates gave second reading to budget ordinance 2022-4 relating to Kentucky Transportation Cabinent Rural/Secondary Emergency Funds, increasing funding for the Horn Road project to $43,120.

Officials say work on Deep Creek Road and Old Dixville Road are finished. The county is compiling a list of roads for next year.