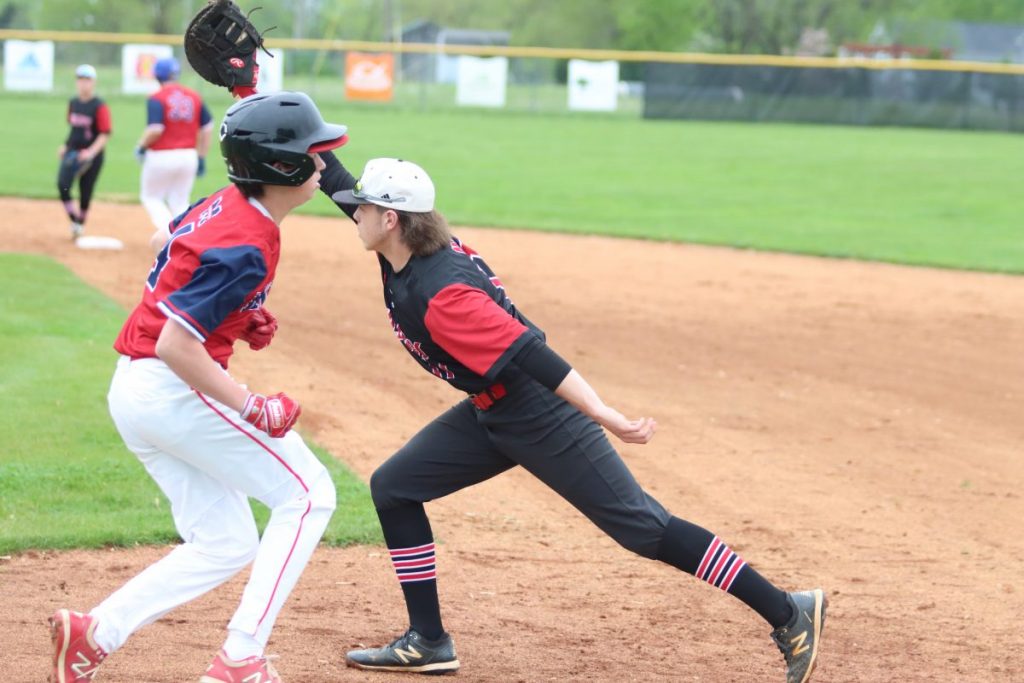 The Harrodsburg Herald/Wesley Bird
Junior Aaron May makes the play at first base for the out in Burgin’s 11-1 win over Model Wednesday, May 4.

The Burgin Bulldogs baseball team (8-11) beat the Model Patriots (2-18), 11-1, behind a huge eight run third inning Wednesday, May 4. The Bulldogs and Patriots had played once already this season on April 15 with Burgin securing the 8-3 win at Model.

Junior Hunter Reed started for the Bulldogs as pitcher and registered the first two outs with a strikeout and he fielded a ground ball to beat the runner to first base. Burgin picked up the last out with  shortstop Landen Sexton gathering a ground ball and throwing out a runner at first base.

Jacob Qualls led off for Burgin in the bottom of the first inning and was walked in five pitches. After Qualls stole second and third base, Reed brought him home with a hit to the right outfield to give the Bulldogs the first run of the game, 1-0. Aaron May moved Reed to scoring position with a line drive to left field and Eli Newby earned the RBI off a ground ball, 2-0. Junior David Lynn brought home May with a sacrifice fly to give the Bulldogs a three run lead, 3-0. Sexton couldn’t beat the ball to first base after hitting a ground ball to end the first inning.

Model scored their only run in the top of the second with Sean Singleton crossing home plate. Singleton made it to first off a line drive to left field and got to third after two ground outs from the Patriots. He finished his trip around the bases off a ground ball to left field, 3-1, Reed got the last out with a pick off at second base to Landon Oaks. The Bulldogs struggled in the bottom of the second inning with Oaks lining out, JT Boswell striking out and Reed flying out.