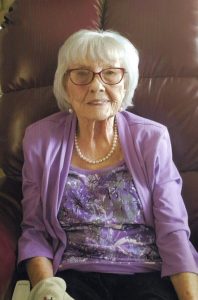 Betty Lea Milam, 91, of Harrodsburg, formerly of Buchanan, Tennessee, died Tuesday, April 26, 2022, at her son’s residence in Harrodsburg. She was a longtime member of Buchanan United Methodist Church and a current member of the Carpenters Christian Church in Harrodsburg. She belonged to the Order of the Eastern Star, where she served as a Past Worthy Matron, and was a member of the Daughters of the Nile. Betty volunteered for many years at Henry County Medical Center in Paris, Tennessee, and the Henry County voting precincts. She enjoyed traveling, singing and being with her grandchildren. Betty was born May 28, 1930, in Knova, West Virginia, to the late Herbert A. Wyrick and the late Thelma Blanch Rowe Clemens. She was married June 30, 1949, to Ozell Wilson “Crash” Milam, who preceded her in death in 2012. She is survived by one son, Joseph Patrick (Donita) Milam of Harrodsburg; one daughter-in law, Nina Milam of Buchanan, Tennessee.; one brother, Charles Robert Wyrick of Portland, Oregon; six grandchildren, Dylan Milam, Elizabeth (Bruce) Moffett, Julie (Jason) Mullins, Sara (John) Abrams, Jerry McGinnis and Bailey Milam and seven great-grandchildren. In addition to her parents and husband, she was also preceded in death by two sons, Steven Wilson Milam and Richard Lee Milam and one brother, William Wyrick. Visitation and funeral services were at the Ridgeway Funeral Home in Paris, Tennessee. Pallbearers were Jerry McGinnis, John Abrams, Bruce Moffett, Liam Moffett, Jason Mullins, Grover Cook and Wayne Spaulding. Burial was in the Hillcrest Memorial Park in Paris, Tennessee. Paid Obit.