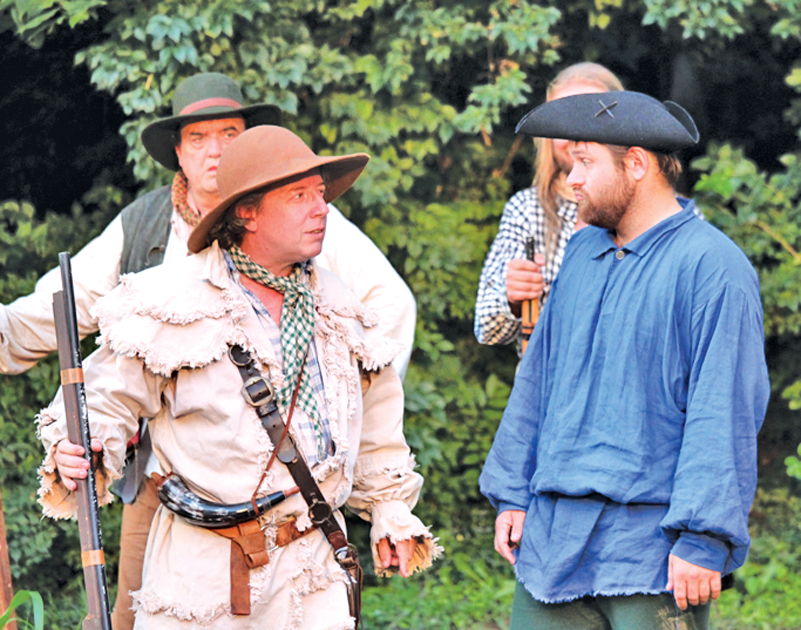 Tim White, left, seen here in a file photo portraying Daniel Boone in a production of “James Harrod: The Battle For Kentucky,” is one of the performers appearing in an online production of “the Kentucky Cycle” on May 12. The production will benefit Kentucky tornado victims.

Jacob Sanders, a senior at Bennington College who is originally from Mercer County, is organizing a fund raiser for the victims of the tornados that hit Kentucky last year. Sanders is directing scenes from Robert Schenkkan’s Pulitzer Prize-winning play, “the Kentucky Cycle,” which will premiere over Zoom on Thursday, May 12, at 7 p.m. Featuring Kentucky actors including Tim White, Chuck Taylor and Tonya Schroeder, the fund raiser will also be available via YouTube. The link will be posted on the Ragged Edge Community Theatre’s Facebook page.

Sanders said this will be a condensed version of the play, which normally runs more than six hours spread over two nights. The version Sanders’ cast will be performing next week will run about an hour and a half, he said.

“I am very excited about this play, mainly for the community building and the chance to raise money for the people who need it,” said Sanders, the son of Lee and DeeDee Sanders.

A 2018 graduate of Mercer County Senior High School, Sanders has spent the last four years studying at Bennington in Vermont, but he said he’s never stopped thinking about Harrodsburg and Kentucky.

“It’s not only my home, but it is the home of so many of the people who have inspired me in my life,” Sanders said.

The play is part of his senior work at Bennington. Sanders said one of his professors, Jenny Rohn, suggested “the Kentucky Cycle,” which she had acted in during its original run on Broadway in 1990.

“I read it and was profoundly moved by the piece,” Sanders said. “Most importantly, the play was about Kentucky, and I was excited to have the chance to share a little bit of my home’s history with my peers, the majority of whom have never even left New England.”

“The Kentucky Cycle” is a series of nine one-act plays set in a small log cabin in Eastern Kentucky, starting in the mid-1700s and ending in 1975.

“Because of the limitations of Zoom, I have picked a few scenes to direct,” Sanders explained. “We will see the stories of the Rowan family from their early days on the farm in the 1780s to their days in the coal camps in the 1920s.”

What he enjoys most about the play is its historical accuracy, Sanders said.

“Schenkkan carefully crafts the stories so that the audience can see both the good and the bad of Kentucky frontier life,” he said. “It by no means demonizes the pioneers, but it doesn’t always treat them as heroes, either.”

It’s also a chance to give back to the community, especially after the tornados hit Western Kentucky in December.

“I decided then that I would also make this play a fund raiser,” Sanders said. “The premiere will be a chance for people to come together in the spirit of family, theater and community.”

The fledgling director said it has been quite an experience rehearsing over Zoom.

“In many ways, I found it extremely helpful as a director,” Sanders said. Working over Zoom freed him from worrying about blocking or stage-fighting and allowed him to cast actors from anywhere, as long as they had an internet connection.

“I have five actors from Harrodsburg and Danville for this show, while the rest were here in Bennington,” Sanders said. “Over the Zoom screen, you could hardly notice that some of the actors were over 800 miles from each other.”

Ever since middle school, Sanders said his family has vacationed in New England, which is how he became aware of Bennington, whose graduates include such luminaries as Peter Dinklage, Alan Arkin and Carol Channing.

After graduation, Sanders has been accepted into the Theatre Education program at Emerson College in Boston for the next two years. This summer, he will return to Harrodsburg and volunteer at Ragged Edge, where he’s been working on and off since January 2021.

Sanders said he also plans to develop an original play for Harrodsburg’s anniversary in 2024 with Allan Barlow, managing director at Ragged Edge.

“The Kentucky Cycle,” by Robert Schenkkan. Live drama featuring Tim White, Chuck Taylor and Tonya Schroeder, will premiere over Zoom on Thursday, May 12, at 7 p.m. A fundraiser for the tornado victims of Western Kentucky, the play will also also be available via YouTube link on the Ragged Edge Community Theatre’s Facebook page.