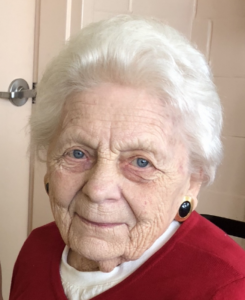 Loveda Shewmaker Scott, 93, of Mackville, widow of Rudolph Martin Scott, died Tuesday, April 19, 2022, at the Ephraim McDowell Regional Medical Center. Born Sept. 13, 1928, in Washington County, she was the daughter of the late Harmon and Blanche Royalty Shewmaker. She was a member of the New Harmony Baptist Church and a 1947 graduate of Mackville High School. Survivors include: two sons, Larry Scott of Springfield and Gary Scott of Mackville; two sisters, Elaine Hatchett and June Shewmaker of Mackville; one brother, Carlton Shewmaker of Mackville, two granddaughters and four great-grandchildren. She was preceded in death by two daughters-in-law, Donna and Mary Jane Scott and one sister, Joyce Sutton.