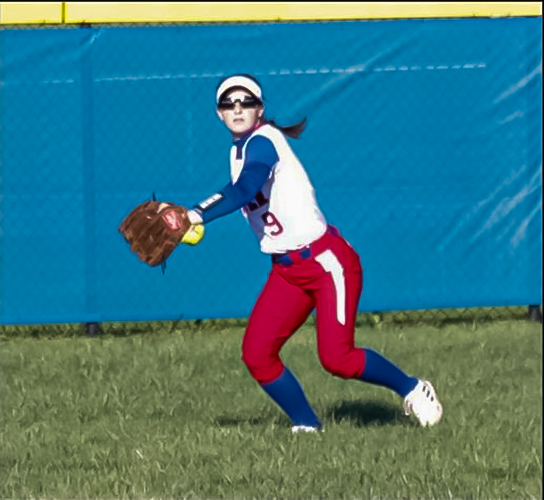 The Harrodsburg Herald/David Carpenter
Kallise Gammon caught the pop out and turned to make the throw to third in the first inning of the Titans game on Thursday, April 14.

Sophomore Ashley Howard started on the mound for Mercer and gave up two early singles to the right outfield as the Colts took a 1-0 lead. Howard walked the next batter and Mercer got the first out with Kallise Gammon catching a fly ball in center field. Mercer caught another break with Avery Robinson catching a fly ball in right field. West Jessamine scored two runs off a fly ball to right field to go up, 3-0. Howard ended the scoring with a strikeout.

Senior Elle Prewitt lead off for Mercer, but couldn’t find her swing. Gammon was thrown out at first on a dropped third strike. Hanna Beasley hit a pop fly to center field to get on base, but Howard grounded out to end the first inning.

The Colts got on base from an error and scored with a sacrifice ground ball to first, 4-0. Makayla Burns picked up an out for Mercer with a ground ball to Prewitt. Gammon collected the last out in center field catching a pop fly.

In the bottom of the second inning, the Titans were still struggling with Burns and Madisynn Griffin both striking out. Presley Bradshaw got on base with a single to center field, but Hannah Ransdell was out on a pop ball in foul territory to end the inning.

The Colts continued their success with a double to left field. Beasley caught a line drive from her short stop position followed by Howard getting a strikeout for two quick outs. West Jessamine hit another deep ball to center field to bring their runner home, 5-0. Howard got the final out on a strikeout.

Robinson reached first base on an error and Prewitt grounded out in the in field. Robinson was caught stealing home and Gammon struck out to end the third inning.