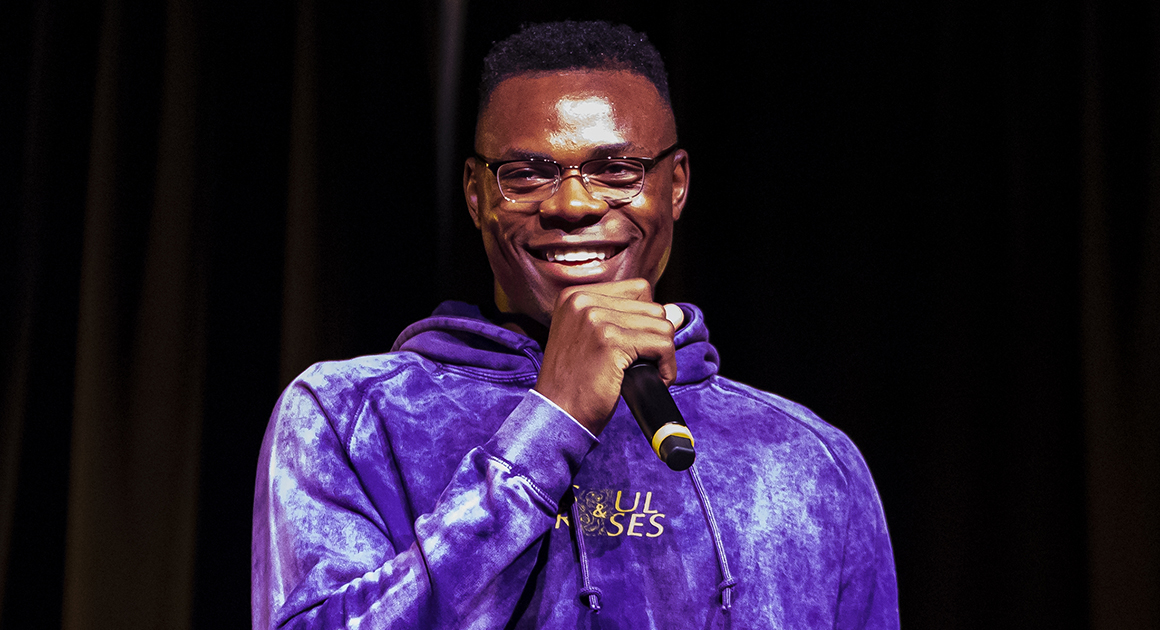 The Harrodsburg Herald/Robert Moore
UK center Oscar Tshiebwe spoke about his faith and his family Sunday night at the CU-Harrodsburg Athletic Complex. Tshiebwe was the featured speaker on the first night of the Central Kentucky Go Tell America Crusade.

While everyone in sports is waiting for University of Kentucky basketball star Oscar Tshiebwe to announce his decision about his future with the Wildcats, Tshiebwe came to Harrodsburg to talk about two things that are more important to him than basketball: his family and his faith.

Tshiebwe was the featured speaker at the Central Kentucky Go Tell America Crusade, which began its four night run in Harrodsburg at the Campbellsville University—Harrodsburg Athletic Complex on Sunday, April 10.

“If God has put a light on you, you should not just hide it for yourself,” Tshiebwe told the audience. “You’ve got to share it with a lot of different people.”

Tshiebwe is a native of the Democratic Republic of the Congo. According to media reports, he grew up playing soccer but was encouraged to start basketball because of his height.

Tshiebwe, who now stands at 6-foot, nine inches, and weighs 260 pounds, did not start playing basketball until May 2014, but he’s made up for lost time.

In the 2022 season, Tshiebwe was named the national college and the SEC player of the year, received the Kareem Abdul-Jabbar and Pete Newell Big Man awards and was a consensus first-team All-American and named to the first-team All-SEC.

“I told my mom, ‘I’m the National Player of the Year,'” Tshiebwe told the crowd Sunday. “She said, ‘Wow, that’s good. But how are your grades?'”

Tshiebwe said he is looking forward to being reunited with his mother here in the United States.

“It would just change a lot of things for me,” he said.

In addition to Tshiebwe’s testimony, Sunday night featured performances by the Jason Lovins Band and a joint choir from churches across Mercer and Boyle Counties.

The Central Kentucky Go Tell America Crusade ran through Wednesday, April 13 and featured ESPN commentator David Pollack; Travis Blast, whose life inspired the 23 Blast movie; and many more. Over 40 churches pooled financial and volunteer resources for the crusade and other events.

For more information about the Go Tell America Crusade, visit their Facebook page at www.facebook.com/gotellcky.